Chaarat has signed a binding term sheet to enter into a joint venture with Turkey-based mining and mine construction contractor Çiftay İnsaat Tahhüt ve Ticaret AS, to collaborate on the Tulkubash and Kyzyltash projects in the Kyrgyz Republic.

Çiftay, a partner since 2017, which mobilised equipment to the Tulkubash site in the Chatkal Valley last year, will be appointed as construction and long-term mining contractor for the Tulkubash project, Chaarat said.

The company has extensive experience as a mining and civil engineering contractor at multiple mine sites in Turkey including two major gold mines, according to Chaarat. Definitive agreements for the joint venture are expected to be concluded next quarter.

Under the agreement, based on an agreed valuation of $252 million (post money) for the two assets, Çiftay will progressively invest $31.5 million for a 12.5% equity stake in Chaarat’s Tulkubash and Kyzyltash assets.

Chaarat said: “Çiftay’s investment provides a significant amount of the required equity for the Tulkubash project. Total capital expenditure for the project is between $120-$130 million and, after the Çiftay equity investment, the vast majority of the remaining capital expenditure is expected to be debt funded, thus avoiding substantial dilution to Chaarat’s shareholders.”

Chaarat is in the process of securing the remaining project financing which is targeted to close in the September quarter of 2019. Çiftay will commence earthworks in anticipation of this, negotiated at “arms-length rates”, which represent an improvement to the terms indicated in the 2018 feasibility study, Chaarat said. 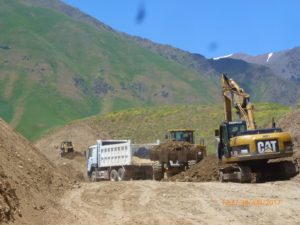 Construction is ongoing at Tulkubash and the first gold production remains on schedule for 2021.

The company continues to advance detailed engineering and has finalised several project components for immediate construction readiness, it said. Çiftay has earthworks equipment at the mine site and constructed a temporary construction camp this winter to be ready for an early spring start to major earthworks.

An updated feasibility study for Tulkubash will be published in the June quarter, but a previous study from April indicated a 95,200 oz/y mine operating at an all-in sustaining cost of $831/oz could be built for $132 million of upfront capital. This was based on a 500,000 oz reserve comprising 16 Mt at 0.91 g/t Au and 1.13 g/t Ag.

A notice to proceed was issued to the contractor on August 31, with initial activities acting as a pre-cursor to full-scale construction at the heap leach project in 2019.

Ҫiftay’s initial operations at Tulkubash will focus on building a temporary 50-person camp for the initial construction forces, partial construction of a permanent camp housing 200 personnel (to be expanded to 360 personnel next year), establishing a temporary maintenance shop, installing a 5 km haul road between the mine and process facilities, building the Kumbel pass-to-site portion of the access road and initial clearing, and grubbing of the heap leach pad area.

These activities are expected to lead to full-scale construction of the Tulkubash heap leach project in the June quarter of 2019, Chaarat said, noting basic engineering for the process plant was already complete and detailed engineering was in progress.

Chaarat plans to use its own project management team alongside strategic engineering support to form the project delivery team.