Gold Fields and Yamana Gold have entered into a definitive agreement, under which Gold Fields will acquire all the outstanding common shares of Yamana pursuant to a plan of arrangement in a deal that could create a top three gold producer (by production).

Under the terms of the transaction, all outstanding Yamana shares will be exchanged at a ratio of 0.6 of an ordinary share in Gold Fields or 0.6 of a Gold Fields American depositary share for each Yamana share. The transaction, which has been unanimously approved by the Board of Directors of both Gold Fields and Yamana, implies a valuation for Yamana of $6.7 billion and represents a premium of 33.8% to the 10-day Volume-Weighted Average Price of Yamana’s shares on May 27.

Upon closing of the transaction, it is anticipated Gold Fields shareholders and Yamana shareholders will own approximately 61% and 39% of the combined group, respectively.

Based on 2021 production, the combined group would have a 3.4 Moz profile along with a 25-year reserve life. It would also benefit from the near-term growth of Gold Fields’ Salares Norte (Chile) and South Deep (South Africa) mines, and longer-term growth from Yamana’s Wasamac (Canada), Malartic Odyssey (Canada) and MARA (Argentina) projects as well as additional opportunities in Yamana’s high-quality exploration pipeline, the companies said.

The deal would create the third largest gold company by gold production in 2024, and fourth largest by market capitalisation, according to the companies, but there is also a clear near-term path towards some 4 Moz of gold-equivalent steady-state annual production, Gold Fields said.

Wasamac, in feasibility study stage, is included within this, but beyond that, the company also outlined growth potential from Jacobina, El Peñón, Minera Florida and Lavra Velha, plus longer-term upside that included the development of MARA. 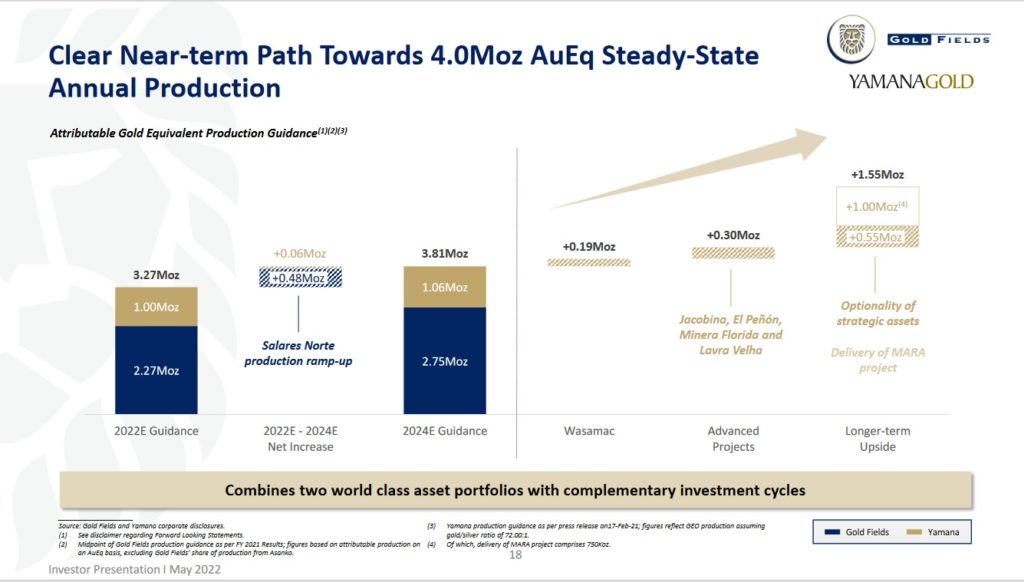 MARA, owned 56.25% by Yamana, is a joint venture with Newmont and Glencore. It is a brownfield operation leveraging existing Minera Alumbrera infrastructure that has 38.9 Moz of reserves.

A feasibility study on the project is expected to be completed by year end, with the report published in the March quarter of 2023.

Chris Griffith, Chief Executive Officer of Gold Fields, said about the combination: “Today we are announcing the acquisition by Gold Fields of Yamana, two companies with complementary portfolios, cultures and strategic priorities.

“The result is a combination with much greater capacity and potential value than the sum of its parts. Each company brings with it a unique set of skills and geological knowledge, enabling the combined group to enhance its assets more efficiently over the long-term than they could as separate companies.

Peter Marrone, Executive Chairman of Yamana Gold, added: “This is an outstanding opportunity for our shareholders, employees and the local communities in which we operate throughout the Americas. The transaction delivers an immediate and compelling premium for Yamana Shareholders, reflecting the inherent fair value of our assets, while also offering an opportunity to benefit from the creation of a new global gold producer with an attractive value proposition.

“The combination of Yamana and Gold Fields creates a world-class, globally diversified company with regional relevance across premier, rules-based mining jurisdictions that is underpinned by low cost, long life mines.”

The initial target for pre-tax synergies is approximately $40 million/y, anchored in operational integration, as well as potential financing synergies and a streamlining of overhead cost structures, they said.

The deal, which is subject to several approvals, is expected to close in the December quarter.

The International Council on Mining and Metals (ICMM) has published a new Social and Economic Reporting Framework which, it says, commits members to report against a set of social and economic indicators, empowering stakeholders such as communities, governments and investors to assess the contribution of mining to social and economic development more easily.

This disclosure will also help companies to better assess and strengthen the delivery of their social and economic contribution programs and provide a clearer overview of the contribution mining is making to economic growth, employment, skills, health, education and a range of other development opportunities in the regions close to their operations, the ICMM said.

Rohitesh Dhawan, CEO of ICMM, said: “Mining plays a significant role in driving social and economic development in the regions where it takes place. What has been missing until now is a consistent set of indicators that measure these contributions, like for like. ICMM’s Social and Economic Reporting Framework raises the bar in several areas including the disaggregation of data by gender and ethnicity, and reporting of employee wages compared to the local living wage. This commitment represents a major step forward, and I encourage all mining companies to adopt the framework to provide a more complete picture of the industry’s social and economic contribution and collectively identify areas for improvement.

“We recognise that there is still more to do to measure, prevent and manage the negative impacts mining activities can have on local communities. We will continue to work closely with stakeholders to assess the potential evolution of the framework so that we can build on the data already being provided to give a clear picture of our members’ performance.”

Chris Griffith, CEO Gold Fields, said: “Along with other ICMM members, Gold Fields was actively involved in the development of the framework as we believe the reporting of social and economic indicators is critical to help provide a clear picture of the contribution we make. This transparency is key to winning the trust of our stakeholders, particularly host communities and governments. We are already aligned with several of the indicators – as reported in our annual Report to Stakeholders – and are working towards disclosure against the full framework.”

The framework was developed through an assessment of existing reporting frameworks and company practices relating to social and economic contribution. It was informed by consultation with a range of external stakeholders including investors, civil society, customers, and international organisations and tested at sites by ICMM members. It builds on existing frameworks such as the Global Reporting Initiative, thereby ensuring a streamlined approach to reporting. Where indicators were not available in existing frameworks, new ones have been developed and included in the framework.

ICMM members have already started the work needed to incorporate these indicators into their reporting systems and are committed to disclose against the indicators by 2024, except for country-by-country tax, for which reporting is expected from 2025.

Dhawan will be moderating a panel at Investing in African Mining Indaba in Cape Town, South Africa, this week, where ICMM Council member Chris Griffith (Gold Fields CEO) and Anglo American South Africa Chair, Nolitha Fakude, will discuss mining’s overall contribution to society, the importance of consistent reporting on contribution, and how transparent reporting will help to build trust across the sector.

International Mining is a media sponsor of the Investing in African Mining Indaba in Cape Town, South Africa

IRMA’s Standard for Responsible Mining has been developed over 10 years through a public consultation process with more than 100 different individuals and organisations, including mining companies, customers and the ultimate downstream users of mined products, non-governmental organisations, labour unions, and communities.

An initial self-assessment was completed by Unki ahead of the independent on-site audit and, according to Anglo, the operation performed well against the 26 areas covered by the Standard for Responsible Mining, including working conditions, human rights, community and stakeholder engagement, environmental impact, and planning and financing reclamation and closure.

Mark Cutifani, Chief Executive of Anglo American, said the company had a longstanding commitment as a leader in responsible mining, with numerous examples of its progressive business decisions across many decades. “We are pleased that Unki will be the first mine in the world to publicly commit to a third-party audit to determine its performance against IRMA’s Standard for Responsible Mining,” he said. “As our customers and end consumers who rely on our metals and minerals rightly expect the highest standards of ethical production, we will be putting all our managed mines through such rigorous certification processes by 2025.”

Aimee Boulanger, Executive Director of IRMA, said while IRMA is a voluntary certification system meant to complement strong laws and government oversight, it is also the world’s first and only global definition of what constitutes leading practices in social and environmental responsibility for large-scale mining operations developed through consultation with a range of stakeholders.

“It is the product of 10 years of collaboration between our stakeholders that seeks to emulate for mining what has been done with certification programs in fairtrade agriculture, responsible forestry and sustainable fisheries, as examples,” she said.

“We are extremely pleased to see Anglo American’s Unki mine take the lead and begin the third-party certification process. We hope that this paves the way for others across the industry to make a similar commitment.”

Chris Griffith, CEO of Anglo American Platinum, said the IRMA self-assessment tool had provided the business with a valuable opportunity to measure the performance at Unki mine against international best practice on a wide range of environmental and societal factors. “We are immensely proud of the work the team has been doing at Unki on responsible and sustainable mining, and we look forward to continue leading the way for our other mining operations.”

Unki is the first of many Anglo American operations to be measured against the IRMA standard, in line with the commitment in our Sustainable Mining Plan to have all of our operations assessed against credible responsible mining standards by 2025.

Other Anglo American operations currently completing the IRMA self-assessment stage include the Barro Alto nickel operation in Brazil and the Amandelbult PGM operation in South Africa.

Unki has not yet been independently assessed against the standard nor achieved a level of recognition at the time of this announcement, Anglo said.