Genrec Engineering has demonstrated its skills and capabilities in steel fabrication and engineering, successfully repairing a damaged dragline excavator boom in record time for one of South Africa’s leading coal mines.

This project also marks another important milestone in the company’s drive to diversify into specialist and niche markets since it was acquired by the Southern Palace Group (SPG) in 2016, the company said.

Genrec Engineering completed the project in around 10 weeks, helping reduce downtime at the mine in the Mpumalanga coalfields.

Producing coal for domestic thermal energy production and for export to global markets, the dragline excavator is an essential component of the mine’s open-pit mining. It is used in combination with drilling and blasting and dozers to expose the seam before wheel loaders and dump trucks are deployed in extensive load and haul operations.

Genrec Engineering’s involvement in this project commenced with a full-scale investigation into the damaged boom structure at the site in August 2017.

Managing Director of CMTI Consulting, Dr Danie Burger, was part of the team that participated in the investigation with various insurance companies.

Burger said a decision to award the boom repair contract to Genrec Engineering was based on the company’s long legacy in the South African and international steel engineering and fabrication industry.

“There is no other steel fabricator and engineering company in South Africa with the necessary infrastructure, as well as capacities and technical competence to take on such a complex project. Had the boom been sent to the original equipment manufacturer’s premises in Australia for repairs, it would have taken up to four times longer to return the dragline excavator back to service with obvious negative ramifications on the mine’s production,” Burger said.

Representatives of the mine’s management team visited Genrec Engineering’s factory in Wadeville, Gauteng, a week ahead of the commencement of the repairs.

Mark Prince, Divisional Director of Genrec Engineering, said: “The depth of experience and expertise of our team have allowed us to constantly innovate, which is a strategic differentiator in this industry and a trait that we proudly demonstrated on this complex design and build project.

“My team of professionals had to be able to think out of the box and on its feet to overcome a myriad of challenges to ensure the timely and quality completion of the project in an extremely short timeframe. The fact that we were able to complete this project in such a short timeframe speaks volumes of the capabilities housed here in Wadeville that have placed us firmly on our next growth path.”

It was completely remodelled by Genrec Engineering’s design team with assistance from CMTI Shared Services, in a process that took about a week-and-a-half to complete.

The original drawings of the Bucyrus dragline excavator were more than 30 years old and updated versions were later received from Caterpillar.

The project also involved careful and complex logistical planning, considering that Genrec Engineering had to locate and source up to 34 tons (31 t) of chord material from various Australian mines to supplement insufficient supplies of the required specification.

“A comprehensive analysis was undertaken of all available material sources to ensure quality and, importantly, traceability in line with the stringent requirements of the OEM,” Genrec said. 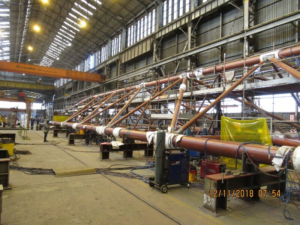 The chords were buttered up and machined to specification and all lacing laser cut to fit assembly.

It took about three weeks of round-the-clock operations to complete the complex laser cutting by approved specialists located in Vanderbijlpark, with Genrec Engineering team members located permanently on site to advise, as well as monitor progress and quality.

They were delivered to the plant in the correct assembly sequence and welding was then undertaken in a 2,200 m² bay converted for specialised manufacturing projects.

Burger says: “The process commenced with pre-heating and the roots undertaken with tungsten-inert gas welding and CO2 used as a filler. Non-destructive testing was done using magnetic-particle, phased array ultrasonic, radiographic and ultrasonic testing. Personnel from NJM Heat Treatment & NDE Services, as well as NDT specialists, were stationed permanently on site to ensure that we were able to maintain sound productivity rates and adhere to exacting quality standards.”

A total of 2.3 tons (2.1 t) of weld material and eight weld feeders were also sourced from Australia to supplement available resources for this project.

One of the complexities of the welding operations was the varying diameters and positioning of the larger chords and smaller lacing, Genrec said.

A total of 129 welders were tested by Genrec Engineering and 52 metal inert gas, or gas metal arc, and tungsten inert gas welders employed to work on this project, together with 18 boiler makers and assistants. Ranks were bolstered with five specialist boom welders, as well as an expert boom weld engineer and project coordinator from Australia.

They also assisted in undertaking the four successful Procedure Qualification Records ahead of welding activities.

Genrec also highlighted the rotators designed and developed especially for this project. These complement the large investment already made by the company and SPG in acquiring the capital equipment needed to diversify into niche and specialist markets.

Among these are the computer-numerically controlled machines housed on the factory floor that have been fully integrated into the SolidWorks engineering programme to ensure high levels of precision and productivity, Genrec said.

These, alone, represent about a R50 million ($3.6 million) investment that is also being supported by continued skills development and training as Genrec Engineering builds up its skills base to cater to the high demand for its specialist services.

As part of the project, Genrec Engineering was also tasked with upgrading the dragline excavator’s boom-point box.

A special furnace was designed and developed around this box and soaked at 600°C for six hours and then cooled down to 37°C for five days. The furnace was heated with gas at a rate of 37°C/h to 600°C.

A canopy was also designed to allow sand blasting to continue apace in the workshop while welding progressed according to plan to maintain high productivity rates.

The components were transported to the mine site by Mammoet using a 13-wheel Nicolas trailer and resting on 11-ton (10-t) cradles specially designed and manufactured by Genrec.

It took three days to transport the two loads to site as part of the last phase of the project.

“This is the largest abnormal load to have ever travelled on the Gauteng road network, and Genrec Engineering was also involved in the extensive road survey, in addition to obtaining all necessary road permits from the Gauteng Department: Roads & Transport,” Genrec said.

The mid-section of the dragline excavator boom was dispatched to site at the end of November and the front end in early-December. It was successfully assembled by Caterpillar’s southern African dealer, Barloworld Equipment, on site in December over a period of four weeks.