Drill automation specialist FLANDERS has released what it says is an improved, new-look interface for its Command Center for its flagship product, part of its ARDVARC© autonomous control solution.

ARDVARC has been used in the field for more than 15 years to convert manually operated blast drills to remote operations. In that time, FLANDERS clients have successfully used it to drill millions of blast holes worldwide, according to the company.

“We value the feedback we get from our clients and have taken all their concerns into account when designing and developing the new and improved features of Command Center,” she says.

“The feedback from our clients has been instrumental in helping us make sure the Command Center works the way they need it to.” 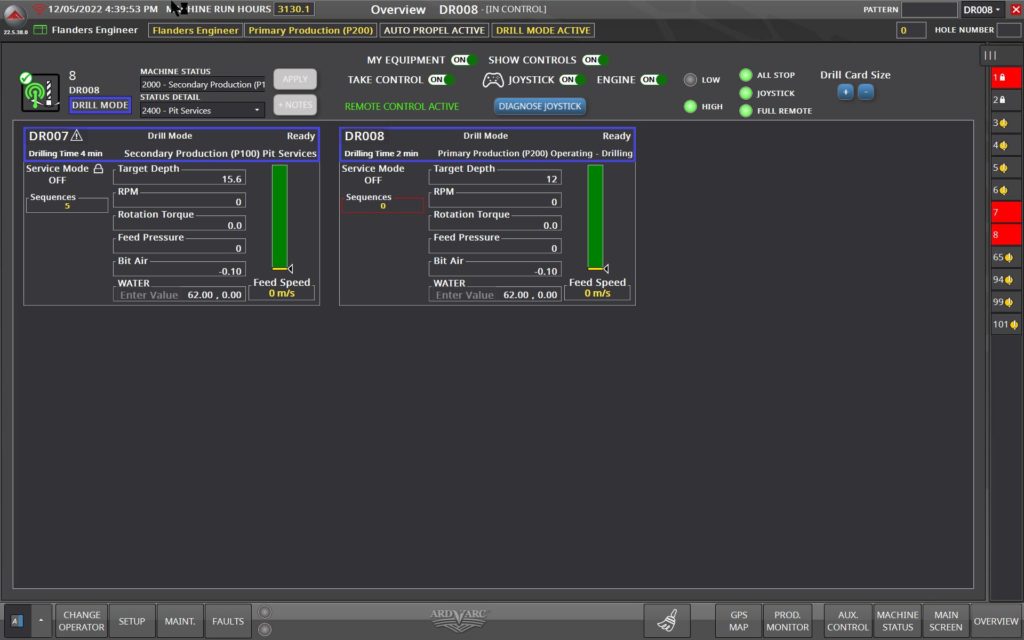 The many changes include improvements to the GPS map, reduced CPU resource usage, and a new, cleaner look for the overview screen.

Claassen says the new GPS map is uncluttered and informative and runs more quickly and smoothly than the previous iteration. For instance, while the GPS map is loading, the information closest to the drill will load first, so operators get the information they need most without waiting for the whole map to load.

“The GPS screen syncs much faster and loads from the drill outwards, so the user sees what they need to see faster than the previous GPS screen,” says Claassen. “Users now no longer have to use the buttons on the screen to zoom in and out, and they can use the scroll wheel on the mouse, which saves a lot of time for operators.

“One of the other big improvements on the GPS maps is that they can add waypoints more easily.”

Windows within the Command Center can now run independently, allowing users to close each window separately and no longer have to restart the entire system, while drill cards have been redesigned to maximise space with the overview screen updates.

“Some operators will have eight drills showing on their screen so their drill cards can be small; we made it so they can easily zoom in and out and adjust the size of the drill card,” Claassen says.

As part of the update, there’s also more room for translating information into other languages, such as Spanish or Portuguese.

Claassen says the Command Center upgrade will be available to customers as part of their annual software maintenance.

“Customers can take all the updates FLANDERS releases during the duration of the annual software maintenance period at no additional cost,” she says.

“Clients only incur a fee if they request customised, business-specific upgrades not part of the planned roadmap items.

“If you’re already using ARDVARC, you’ll get the new improved Command Center to upgrade as part of your normal annual software maintenance.”