There can be many consequences of a mistracking belt, but all result in higher costs and increased maintenance. Even a slight belt misalignment can lead to a variety of issues, from small annoyances to full-blown catastrophes.

The most obvious effects include spillage and dust that require personnel to do cleanup – unproductive work that introduces risks from activities in close proximity to the moving conveyor. Spillage from non-centred cargo often gets into idlers and pulleys, reducing bearing life and causing them to seize, leading to friction damage on the belt and potentially starting a fire.

A misaligned belt can also come in contact with the stringer, causing fraying, shredding or splice damage. Great lengths of valuable belting can be destroyed with surprising speed, and even the support structure itself can be damaged, Martin Engineering says. A compromised bracket or support can cause a catastrophic idler failure, which could damage other components of the system and require extensive downtime to repair. Further, there is potential for injury from a damaged belt or loose idler, not to mention the increased exposure to injury from too frequent a need to clean.

“I’ve been working around conveyors for 20 years, and I’ve seen thousands of belts,” Martin Engineering Process Engineer, Dan Marshall, says. “I’ve seen just about every problem that can be caused by a mistracking belt, but one thing I’ve never seen is a belt that runs true right out of the box. All conveyors, no matter how well designed and built, have some belt wander.”

A wide variety of circumstances can lead to mistracking, and operators have tried many things to correct the alignment. Some have elected to place an obstacle such as a block of wood in the belt path, so it won’t travel too far out of line. This occasionally improves the situation, but more often it’s just temporary and the belt will eventually slice through the obstacle.

Many operators have realised that pivoting an idler is a quicker and more effective way to steer a belt. This common approach is called “knocking an idler”, striking it with a hammer to move it slightly and realign the belt (see below). 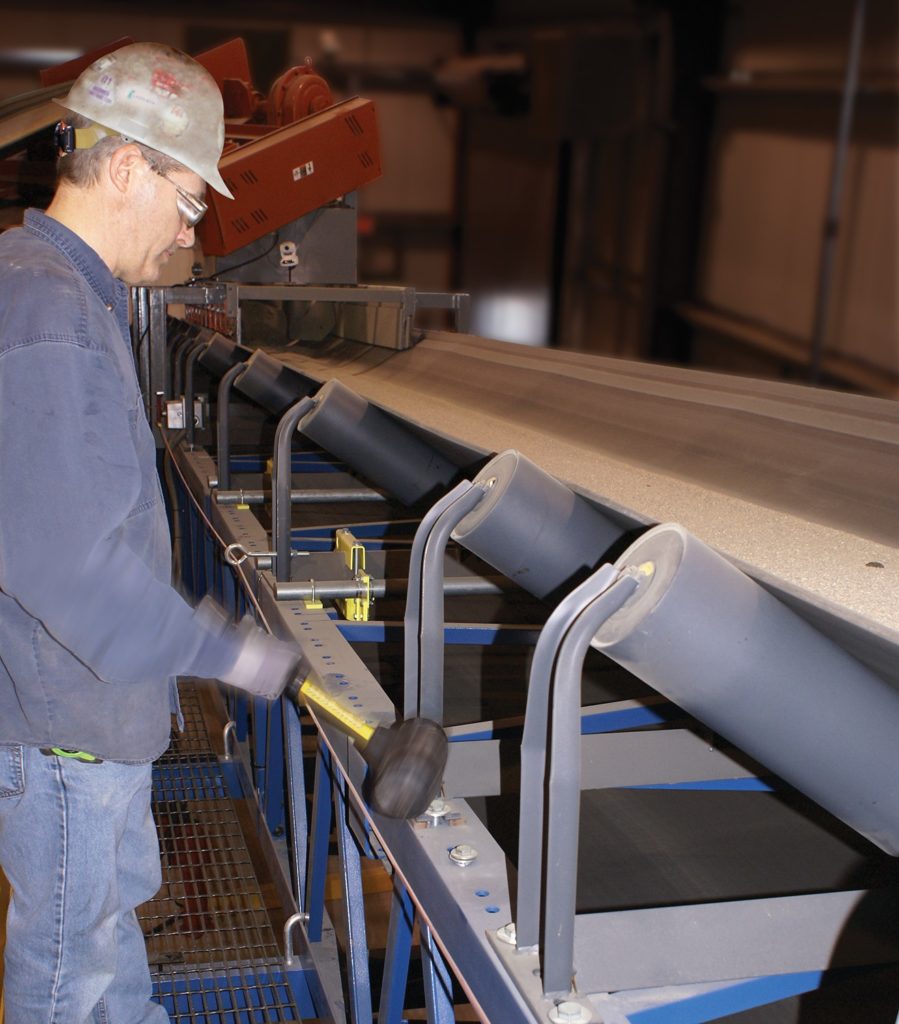 Equipment manufacturers have also designed components to help align a belt, and these solutions can be successful in specific applications. They include specially-shaped rollers, angled idlers and devices that apply pressure to the belt edge to push it back in line.

“While these mechanisms can improve a belt that’s consistently off-centre in one direction, they do not react to dynamic belt movement, meaning that they don’t correct intermittent belt wander,” Marshall continued. “To combat such changing conditions, engineers designed the tracking idler. Unlike the edge correction approach, the device senses belt movement in either direction, and pivots the idler slightly to steer the belt back into position. It doesn’t apply a great deal of force to the edges, which can damage a belt and splices. When the belt is running true, it remains centred, and when it senses a misaligned condition, it gently corrects the belt.”

Unfortunately, to accommodate limited space availability, tracking idlers typically have short sensing arms, according to Martin Engineering. This requires a fairly large belt displacement to create a small movement of the idler. While these designs do tend to improve tracking, there are limits to how much correction they can deliver, and short sensing arms can actually pinch a belt if the idler pivots too far. To combat this, some operators choose to “tie off” a tracking idler to limit its movement. While the practice can help preserve the belt, it doesn’t address significant mistracking, the company says.

To overcome the limitations of existing belt alignment devices, Martin Engineering has invented and patented a Multi-Pivot Belt Tracker, which employs sensors, pivoting idlers and geometry to align a wandering belt. The sensors avoid pinching the belt, and the engineered geometry amplifies any detected misalignment to create a greater pivot.

Multi-Pivot Belt Trainers (see photo at the top) use longer arms than other designs, positioning the guide rolls further from the pivot roller, as well as closer to the belt edge, according to the company. The closer proximity allows guide rolls to sense very slight misalignments and make immediate corrections. Rather than waiting for a powerful mistracking force, the longer arms require considerably less pressure to move the pivot roller. The result is better correction with no pinch points and less wear on conveyor and tracking equipment, for longer and more efficient service life, Martin Engineering says. Specific designs are available for both the load-carrying belt path and the return run.

“Installing trackers is the economical solution, but operators should do a full analysis and consider also addressing other causal issues,” Marshall added. “By focusing solely on belt alignment, plant personnel may miss other opportunities to increase production and relieve some of the burdens on their system.”

Keeping the belt centred and moving quickly is the key to high production, controlled operating cost and a safer workplace.

“Misalignment causes downtime and costs money,” Marshall concluded. “But nothing causes more downtime and expense than a destructive belt fire or other catastrophe as a result of inattention to mistracking problems.”

In bulk material handling applications, a conveyor is typically a massive, complex and extremely powerful system. It is usually constructed of rubber belting, set on rolling idlers, wrapped around large steel drums at each end and driven by a high-torque motor. As such, a conveyor presents enough danger zones that the entire system should be considered a hazard, according to Martin Engineering.

In most applications, a conveyor belt moves at a relatively constant speed, commonly running somewhere between 0.5-10 m/s. An Olympic sprinter has a reaction time of about 0.18 seconds when poised at the starting line and totally focused on the race. If this athlete becomes tangled in a conveyor belt traveling 1.5 m/s, the person would be carried 0.27 m before even realising what has happened.

A ‘regular’ worker would likely require a longer time to react, Martin Engineering says. For simplicity’s sake, assume it would be twice the athlete’s reaction time, so the worker would be pulled twice as far, introducing the potential to strike many more components or to be pulled farther and harder into the first one.

In addition, most conveyors are engineered with the ability to start remotely. The system may go from dormant to active at any time at the push of a button, and that ability can suddenly catch a worker unaware, leading to serious injury or death, the company says.

Martin Engineering Process Engineer, Dan Marshall, said: “When a conveyor belt is moving, there will usually be more tension on the carrying side. If the conveyor is merely stopped and de-energised, that tension may remain in the belt in the form of stored energy.”

A system under tension will always try to approach equilibrium, according to Marshall; that is, it will try to release the energy. This release will likely come in the form of a pulley slip, which occurs when the belt slides around the head pulley to equalise the tension. The distance the belt will move is proportional to the amount of tension stored and the belt’s modulus (elasticity), possibly several feet. If a worker is on the belt or close enough to be pulled in during this sudden release of energy, injuries or death can occur.

“There’s a simple rule of thumb regarding conveyors: if it’s moving, don’t touch it,” Marshall continued. “The most common way to prevent inadvertent contact is with suitable guarding that renders the moving components inaccessible.”

For maintenance or repairs, procedures for lockout/tagout/block-out/test-out should always be followed when working on a stationary conveyor, and systems should be equipped with anti-rollback devices (also known as backstops) on the head pulley.

Many of the moving parts on a conveyor belt system are rotating components. These parts include idlers, drive shafts, couplings, pulleys and speed sensors. Items rotating at a high speed pose the risk of entanglement or entrapment.

There are many pinch points on a conveyor, components that the belt touches or comes near, including the drive pulleys, snub pulleys, idlers, stringer, chute walls and deflectors. If a worker’s limb travels with a conveyor belt, it will meet one of these components. The limb, as well as its attached worker, will become trapped between the belt and the obstruction.

The same thing can happen with a tool, which can pull a worker into the entrapment faster than the person can let go.

“Effective fixed guards should be absolute in their protection; workers should not be able to reach around, under, through or over the barrier separating them from moving components,” Marshall added.

Many of the fatalities around conveyors have happened when a worker was cleaning fugitive material from the structure or components of a conveyor system. The process of cleaning may put a worker in proximity to a very dangerous machine, according to Martin Engineering. The need to shovel, sweep or hose off accumulations puts the worker within arm’s length of the conveyor, and often closer.

Airborne dust can cause numerous health risks, ranging from material build-up in the lungs to explosions. Categorised as either respirable or inhalable according to particle size, dry, solid dust particles generally range from about 1 to 100 microns in diameter.

According to the EPA, inhalable coarse particles are 2.5-10 microns in size. They are typically caught by the human nose, throat or upper respiratory tract. In contrast, fine respirable particles (under 2.5 microns) can penetrate beyond the body’s natural cleaning mechanisms (cilia and mucous membranes), traveling deep into the lungs and causing long-term or chronic breathing issues.

While it is virtually impossible to prevent all fugitive material from escaping a conveyor structure, taking practical steps to minimise it as much as possible helps reduce the dangers it can introduce, the company says. When clean-up is necessary, performing the job while the conveyor is running should not be an option. Operators concerned with the cost of lost production from stopping a conveyor to clean need only consider the consequences of an accident to confirm the wisdom of this rule.

Until recently, the engineering of belt conveyors to carry bulk materials hadn’t changed much in the last half-century, despite the fact that virtually every requirement for safety, regulatory compliance and production performance has been raised during that time. Standards continue to tighten and industry best practices now often exceed government requirements.