Sandvik Mining and Rock Solutions is set to unveil three new underground drilling solutions at MINExpo 2021 in Las Vegas, based around a common theme of electrification, sustainability and digitalisation.

The new products to be unveiled at the show, taking place from September 13-15, include a new battery-powered bolting rig, an accompanying portable training simulator and a new mobile application for enhanced drilling.

The rig’s iSeries platform offers various levels of automation for rock support drilling as well as providing component commonality through the 400i drill range. The introduction of Sandvik DS412iE rounds out Sandvik’s first range of battery-electric vehicles for all underground drilling applications, according to the company.

Sandvik Digital Driller™ training simulators provide a compact and flexible solution to safely train underground drill rig operators or maintenance teams, the company says. The latest Digital Driller module is specifically designed to support the new Sandvik DS412iE battery-electric rig, with the new version retaining the key features of being low weight and highly portable, enabling it to be used where it is most needed – on site.

Use of the simulator is estimated to increase annual productivity by 5% due to increased rig availability alone, Sandvik claims. In addition, training costs are reduced by up to 35% through less energy and consumables costs and reduced rig damage.

The new Sandvik DrillConnect mobile application transfers drilling plans – including those created in iSURE® – drilling reports and MySandvik machine data in environments where network coverage is inadequate or not available. Sandvik DrillConnect removes paper-based processes and automates the data transfer between the office and drill rig via a customer’s preferred mobile device. The app also provides easy access to the machine’s troubleshooting and manuals and is designed to be scalable for future development, according to Sandvik. The first version will be compatible with iOS devices, with plans to introduce Android compatibility in future iterations.

Patrick Murphy, President of Underground Drilling at Sandvik Mining and Rock Solutions, said: “Our latest developments are based on the feedback we have received from customers. We have listened to their challenges and are developing solutions that ensure we will continue to lead the industry shift toward a more digitalised and electrified future.”

Having electrified its DD422i development drill, Sandvik Mining and Rock Technology is now looking to extend its battery technology to two more of its intelligent drills: the DL422iE top hammer longhole drill and the DS412iE rock bolter.

During the Innovation in Mining virtual event this week, it came to light that the company is currently testing a battery-equipped prototype DL422iE unit in Canada ahead of a planned launch in the March quarter of 2021.

It will be joined later in 2021 by the DS412iE rock bolter which, with the existing DD422iE drill, provides a full range of electric drills for all applications; all of which offer battery-powered tramming and carry out bolting or drilling when connected to mains electric power.

These newest battery-powered vehicles are based on the DD422iE technology with intelligent control system and a wide range of automatic functions, engineered to provide top-level performance, accuracy and reliability, the company says.

Sandvik Mining and Rock Technology plans to launch its first and one of the the mining industry’s first battery-powered rock bolters next year, as it continues to roll out new solutions to electrify the underground mining space.

The Sandvik DS412iE extends the zero emissions concept to the underground rock bolter class and opens a wide range of possibilities for mines driven to boost their productivity and safety with data-based analytics, according to the company.

In its core mission of delivering productive, secure and versatile rock support solutions, Sandvik rock bolters have a clear track record, according to the company.

“Still, these tools’ automation and data acquisition capabilities have not been as advanced as their production and development drill rig counterparts,” the company said. “Scheduled for launch during 2021, the new Sandvik DS412iE rock bolter will complement the intelligent family of next-generation battery-powered underground drill rigs.”

“We have received positive feedback about that model,” Kouhia said. “We made an accomplished model even better with more advanced automation capabilities, improved data acquisition and upgraded ergonomics.”

Like the battery-powered DD422iE  jumbo drill, the rig trams on battery and carries out drilling and bolting when connected to the mains power.

Along with its direct predecessor, the new intelligent bolter also has much in common with the larger Sandvik DS512i in the 5 x 5 m drift size. One example is their similar versatility in terms of bolting systems: Sandvik DS512i and Sandvik DS412iE can handle a wide range of bolt types and lengths, including a combination of automatic cement mixer and automatic resin injection on the same bolter.

The new Sandvik DS412iE will effectively complete Sandvik Mining and Rock Technology’s rock support drill range for the 4 x 4 m class, updating its entire product range to the latest i-standard of connectivity and automation capabilities, the company said. Additionally, the Sandvik DS412iE will be the supplier’s first battery-powered rock bolter.

“In other words, the zero underground emissions approach will now include all stages of the underground mining process: rock support drilling as well as development and production drilling and loading and hauling,” Sandvik said. “The ability to virtually eliminate underground particulate matter, NOx, CO2 and heat emissions is first and foremost a major health and safety benefit, but also offers cost savings by reducing mine ventilation power requirements.”

In addition to reducing underground emissions and improving working conditions, the safety and environmental improvements also make economic sense by reducing time lost to injuries and costs. The advanced automation capabilities will increase the speed and safety of the bolting cycles as well as open a range of possibilities for process optimisation, the OEM said. “This will translate into more reliable rock supporting and safer working environments.”

Like one-hole automation that has been a standard feature in Sandvik mining and tunnelling jumbos, the one-bolt automation feature of Sandvik DS412iE now extends this capability to rock bolters, Sandvik said.

“The rig can carry out a single bolting cycle unassisted, so that in optimal conditions the operator only needs to manually relocate the boom from one bolt location to another,” the company said.

The battery-powered unit will come with two automation levels: the standard Silver package from the outset and, in the near future, the optional extended Gold level. The main difference between the two packages is in the remote monitoring and operating capabilities and in the measurement-while-drilling functionality.

The automation packages seamlessly mesh with Sandvik iSure software, according to the company. Available as a standard tool for designing drift drilling plans and blasting plans, iSure now increasingly extends to bolting operations and comes in three levels: iSure Basic and iSure Plus for the standard Silver automation package, and iSure Premium for the optional Gold level automation. The advanced automation solutions can offer a significant productivity and quality boost, Sandvik said. 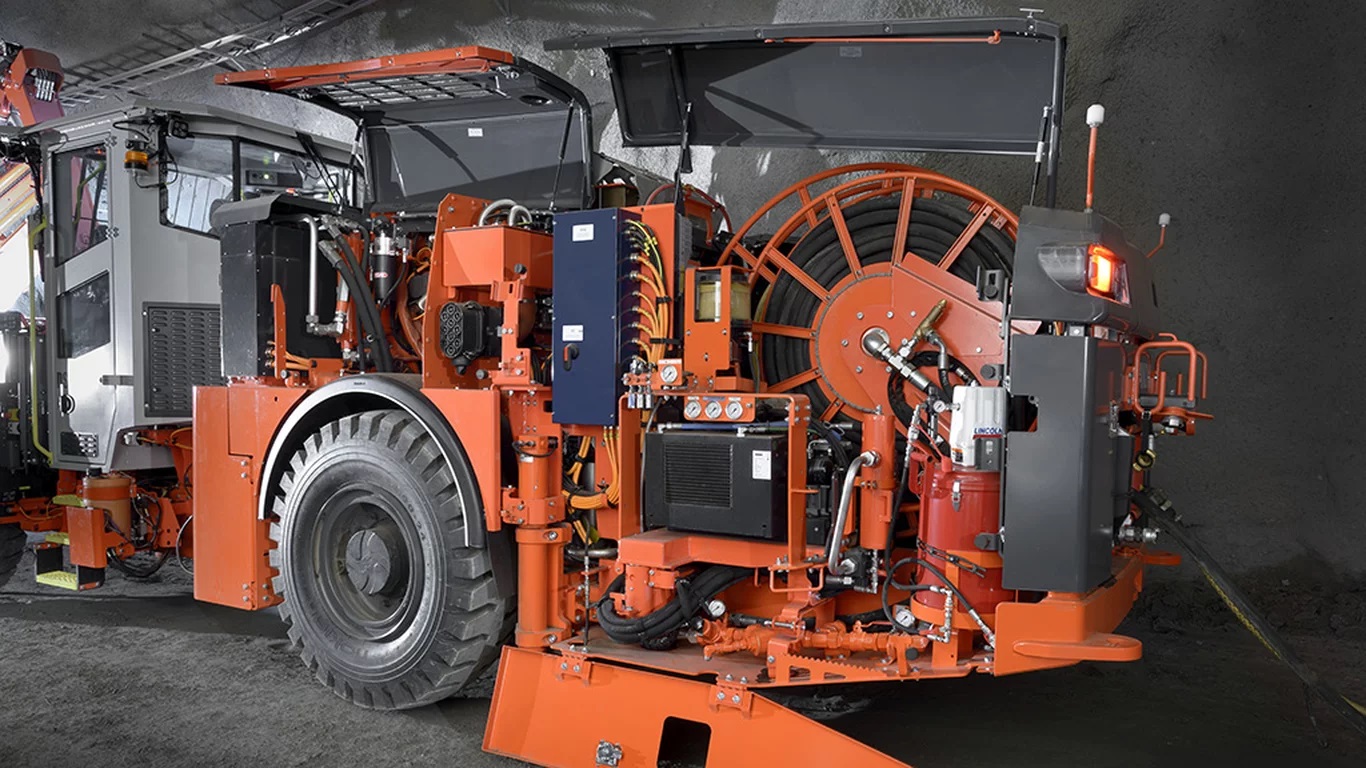 “With iSure, you can design a bolting pattern in the office, transfer it to the rig over Wi-Fi or on a USB flash drive, carry out the bolting according to the pattern, and, on top of that, you can retrieve a report that compares the plan and the realised bolting pattern,” Kouhia says.

In addition to the bolting pattern, the retrieved data will also include various parameters that characterise the quality of the bolting process, such as grouting concrete consumption and bolt tightening torques. This can serve to document the bolting process in much greater detail than it did previously, which enables more accurate quality control of the rock supporting measures.

The verifiable track record of the rock support measures taken provides systematic safety documentation and, should a failure still occur, the bolting process reports can help to determine the cause of it, down to the level of an individual bolt – when it was installed, how it was installed and whether it complied with set specifications.

Full compatibility with the My Sandvik fleet management portal and the OptiMine suite of digital mine automation and analytics solutions further enhances the connectivity of Sandvik DS412iE, providing all-round data-based control for rock support operations, the company said.

While the main areas of focus for Sandvik DS412iE surround automation, connectivity and data acquisition capabilities, productivity has not been neglected, Sandvik said.

In terms of sheer mechanical power, much of the new bolter’s high productivity derives from the new control system of the Sandvik RD314 rock drill, which substantially increases the output and penetration rate. Overall, the productivity upgrade is roughly 25% from previous models, according to Sandvik.

The Sandvik DS412iE includes many safety and ergonomic features.

The bolter is designed to be compliant with the EN16228 standard for drilling and foundation equipment, which is harmonised with the requirements of the European Machinery Directive. One of the EN16228 requirements is an access detection system (ADS). In the Sandvik DS412iE, the ADS automatically scans the surroundings of the bolter and alerts the operator should a person enter the work area, which effectively reduces potential accidents. The safety improvements also include a fully covered steel strand reel.

The Sandvik DS412iE continues the bolter class’ legacy of secure and effective cabin design, Sandvik says, with a 55% percent improvement in visibility, better effective vibration control and significant noise reduction adding up to a safer and more comfortable workplace for the operator.

Future launches will also include a diesel-powered version, Sandvik DS412i, which will be compliant with the latest engine emission specifications, Sanvik said.

This is an edited version of a story that first appeared on Sandvik’s Solid Ground platform here.