PYBAR, part of Metarock Group Ltd, has been rewarded for its last two years of service at the Eloise copper mine in Queensland, Australia, having now been awarded a four-year services contract.

Since arriving on site in 2020, PYBAR says it has set the standard in safe and efficient delivery of underground mining services and will continue delivering as it embarks on a new four-year mining services contract.

Having safely completed nearly 6.5 km of development at the high-grade Eloise copper mine over the past two years, PYBAR was invited to participate in a competitive tender process for the new contract earlier this year and was awarded the mining services contract at Eloise by mine owner, AIC Mines Ltd, for a further four-year term.

The new contract, with the additional scope of shotcrete services, will see PYBAR on site at Eloise through to 2026, and includes the development of declines, level accesses, ore drives, stockpiles and infrastructure, providing all facilities, services, labour, supervision, administration, construction plant and materials.

Forming part of the PYBAR fleet of mining equipment on site is a new Elphinstone CT WR820 10 cu.m agitator (pictured below), as well as two twin boom jumbos, two LHDs, a charge rig and a shotcrete spray rig. 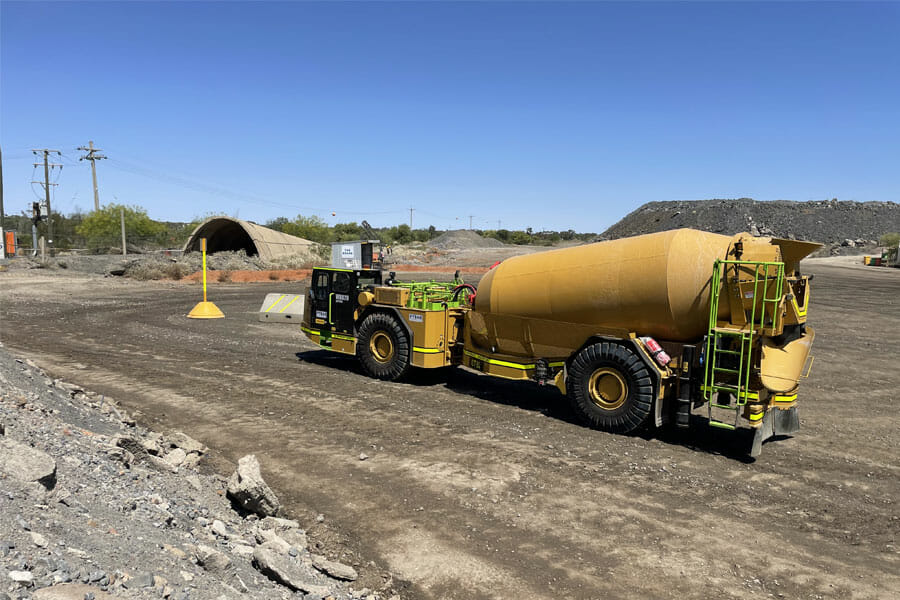 PYBAR’s CEO, James Glover, said: “We are very pleased to have been awarded the extension of the Eloise project which is a testament to the work that has been delivered on site to date by our team at Eloise. AIC is a growth focused resources company and it’s pleasing to be able to extend our term for another four years and be a part of that growth journey.”

The team of over 50 skilled PYBAR personnel on site has kicked off the new Eloise contract well, setting the standard for the remainder of the contract with a near-record month of 412 m of development achieved in July.

PYBAR, part of Metarock Group Ltd, says it has secured a new three-year fixed term contract for the supply, delivery and application of fibrecrete and cement fill at MMG’s Rosebery Mine in Tasmania, Australia.

The contract, which comes with two one-year extension options, will create 25 employment opportunities across a range of roles within PYBAR and generate significant revenue for the business, it said.

A brand-new fleet of three CT WR820 Elphinstone 10 cu.m agitators, two Jacon Equipment spray rigs, and a permanent batch plant is slated for the project, which is due to get underway in early 2023.

“The award of the contract forms part of PYBAR’s ongoing growth strategy and will see us return to Tasmania, working with our Tier 1 client, MMG Limited, to deliver on this important project,” the company said.

Elphinstone says it has partnered with Caterpillar dealer, Finning, to provide a diverse range of underground mining support vehicles to suit the mining application.

With sustainability at the forefront of clients’ minds, Elphinstone has begun developing a suite of battery-electric support vehicles for underground hard-rock mining to address the increasing decarbonisation efforts and expectations of its global customer base.

This will allow Finning and Elphinstone to support their clients in achieving their ESG targets, Elphinstone said.

Elphinstone said earlier this year that it was working on delivering its first battery-powered underground support machine prototype by March 2024, thanks, in part, to a grant from the Australian Federal Government’s Modern Manufacturing Initiative. The company confirmed the battery-electric solution would be for the WR810 underground service vehicle platform and “Next Gen” underground grader (graphic above).

Finning is an authorised dealer for the Elphinstone UG product line including the UG20M Grader and the WR810 Series comprising a Delivery with Crane, Water Cannon, Fuel & Lube, 6m3 Agitator and Scissor Lift.

The WR810 Series is optioned with a Tier 4 Final version of the Cat C7.1 engine to align with Canadian emission standards, Elphinstone says. The operator cabin is designed to seat three people in comfort with exceptional visibility, the company added. In the working environment a three-seater cabin allows for the complete crew to go collectively rather than deploying an additional light vehicle for personnel transport.

The partnership could see an exciting new line up from Elphinstone with the trusted service, warranty, parts and support from Finning, Elphinstone says.

Elphinstone Pty Ltd has commenced a project to develop a suite of battery-electric vehicles (BEVs) for underground hard-rock mining to, it says, address the increasing decarbonisation efforts and expectations of its global customer base.

The project will require a significant research and development investment by the company in addition to the recently awarded Australian Federal Government Grant, according to the company.

Leveraging its existing portfolio of underground support vehicles, Elphinstone will develop the BEVs in collaboration with its customers and supply chain partners and produce these in existing product development and manufacturing facilities in Burnie, Tasmania.

Elphinstone said technology projects of this calibre provide growth in highly valued skill sets across the country and will continue to provide jobs in the future. The company expects the project will create 15 highly-skilled positions to complete the development of both machine prototypes.

Elphinstone envisage that the BEV project will also create further opportunities and growth in the state and local communities.

It is currently engaging with strategic partners who have indicated their interest in working closely with Elphinstone on this development project. The vision is to provide a BEV solution at the forefront of technology while maintaining a reputation for high quality, premium and reliable products which are well-positioned and recognised globally in the underground hard-rock mining industry, the company said’.

Elphinstone has announced the sale of its 50th underground motor grader, designed and manufactured at the company’s facilities in Burnie, Tasmania.

In 2017, Elphinstone identified an opportunity to expand its range of underground support vehicles by introducing the UG20K and UG20M haul road maintenance machines, based on the Caterpillar 120K and 120M surface grader platforms, with custom modifications designed for underground conditions.

The first Elphinstone underground grader was developed from a Caterpillar 12G in 1978.

The role of the underground grader, Elphinstone says, is to prepare and maintain haul and access roads with adequate drainage throughout the tunnel network. Quality haul road maintenance ensures all production, support and light vehicles can move freely in a safe and controlled manner with optimal efficiency. The added benefit is increased production equipment tyre and component life and speed on grade.

RCT and Tasmania-based Caterpillar OEM Elphinstone have again teamed up to provide a custom Control Master® portable teleremote solution for a client in Indonesia.

RCT Custom will apply this technology to an Elphinstone-manufactured WR820 articulated underground water truck; the second time it has done so for the same client.

The portable teleremote solution works by using cameras on board the machine to relay vision of its movements to the operator, who can then oversee the machine via remote control.

The machine’s tramming and the articulation of the water cannon mounted on the crane can be controlled by RCT using looms and hydraulics installed and manufactured by Elphinstone to RCT specifications.

RCT said: “This wasn’t a straight forward installation, hence why RCT Custom was tasked with the job.”