Ivanhoe Mines has announced another milestone at the Platreef platinum group metals project in South Africa, with construction complete at the 996-m level station of Shaft 1.

The achievement, completed well ahead of the contractual schedule, according to Ivanhoe, positions the company to equip Platreef’s initial production shaft, if it chooses to proceed with phased development of the mine on the Northern Limb of South Africa’s Bushveld Complex.

Sinking was carried out by contractor Moolmans, with the project remaining ‘Fall-of-Ground’ incident free since shaft sinking operations began in July 2016, the company said. On top of this, in June 2020, Moolmans and the Platreef team achieved South Africa shaft sinking industry leader status in terms of safety performance, according to Ivanhoe, which owns 64% of the project through Ivanplats.

Ivanhoe’s Co-Chairmen, Robert Friedland and Yufeng “Miles” Sun, said: “Given the flurry of recent transactions in precious metals markets, we are actively exploring a number of options that can help us unlock Platreef’s extraordinary value for the benefit of all Ivanhoe stakeholders.

“After all, Platreef is among this planet’s largest precious metals deposits.”

Platreef now has a completed shaft within a few hundred metres of the initial high-grade mining zone, according to Friedland and Sun.

“We have a mining licence, we have water and we have a team of highly-skilled employees,” they said. “The deposit has enormous quantities of palladium, platinum, rhodium, nickel and copper; and it has more ounces of gold than many leading gold mines.”

They concluded: “Given the current precious metals environment, I am confident that the pending studies will showcase the exceptional economics that one would expect from such a thick, high-grade and flat-lying deposit.”

Ivanhoe is updating the Platreef project’s 2017 definitive feasibility study (DFS) to account for development schedule advancement since 2017 when the DFS was completed, as well as updated costs and refreshed metal prices and foreign exchange assumptions.

The DFS for Platreef covered the first phase of production at an initial mining rate of 4 Mt/y, estimating Platreef’s initial average annual production rate would be 476,000 oz of platinum, palladium, rhodium and gold, plus 21 MIb (9,525 t) of nickel and 13 MIb (5,897 t) of copper.

Concurrently, Ivanhoe is finalising a preliminary economic assessment for the phased development production plan for Platreef. The plan targets significantly lower initial capital to accelerate first production by using Shaft 1 as the mine’s initial production shaft, followed by expansions to the production rate as outlined in the 2017 DFS, Ivanhoe said.

“The re-evaluation is being done in parallel with the ongoing mine development work to access the thick, high-grade, flat-lying Flatreef deposit that was discovered in 2010 and outlined in the Platreef 2017 feasibility study,” it said.

The new auxiliary winder for the 7.25 m diameter Shaft 1, which is scheduled to be delivered to Platreef later this year, will be used to assist in equipping the shaft; and thereafter for logistics, shaft examination and auxiliary functions. The auxiliary winder will provide a second means of ingress and egress from the shaft after removal of the stage winder.

Shaft 1 is around 350 m away from a high-grade area of the Flatreef orebody, planned for bulk-scale, mechanised mining.

Ivanhoe Mines and sinking contractor Aveng Mining have reached a new milestone at its Platreef PGM-nickel-copper-gold project in South Africa with Shaft 1 now at the top of the ‘Flatreef’ deposit, 780 m below surface.

At the Shaft 1 intersection, the flat-to-gently-dipping deposit is an estimated 26 m thick, making it amenable to the sort of bulk-scale mechanised mining most PGM operators would dream of.

This is the first time Platreef, in the Northern Limb of South Africa’s renowned Bushveld complex, has been intercepted by underground mining activity, according to Ivanhoe Mines.

The mining team has now delivered first ore from the underground mine development to a surface stockpile for metallurgical sampling. “The estimated thickness of the mineralised reef (T1 and T2 mineralised zones) at Shaft 1 is 26 m, with grades of platinum-group metals ranging up to 11 g/t 3PE (platinum, palladium and rhodium) plus gold, as well as significant quantities of nickel and copper,” the company said.

The 26 m intersection is expected to yield some 3,000 t of ore, estimated to contain more than 400 oz of PGMs.

The 750 m station on Shaft 1 will provide initial, underground access to the orebody, enabling mine development to proceed during the construction of Shaft 2 – the mine’s main production shaft.

The mining zones in the current Platreef mine plan occur at depths ranging from approximately 700 m to 1,200 m below surface.

Shaft 1’s 750 m station will also allow access for the first raisebore shaft, which will have an internal diameter of 6 m, to provide ventilation to the underground workings during the mine’s ramp-up phase.

As shaft-sinking advances, two additional shaft stations will be developed at mine-working depths of 850 m and 950 m. Shaft 1 is expected to reach its projected, final depth of 980 m below surface, complete with the stations, in early 2020.

Excavation of the Shaft 2 box cut to a depth of approximately 29 m below surface is progressing well, according to Ivanhoe.

Completion of the box cut will allow for the construction of the concrete hitch (foundation) for the 103 m-tall concrete headframe that will house the shaft’s permanent hoisting facilities and support the shaft collar. 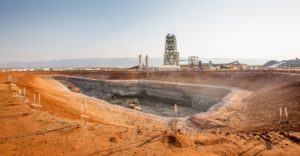 Shaft 2, around 100 m northeast of Shaft 1, will have an internal diameter of 10 m, will be lined with concrete and sunk to a planned, final depth of 1,104 m below surface. It will be equipped with two 40 t rock-hoisting skips with a capacity to hoist a total of 6 Mt/y of ore. This is the single largest hoisting capacity at any mine in Africa, according to Ivanhoe.

In July 2017, Ivanhoe issued an independent, definitive feasibility study (DFS) for Platreef covering the first phase of production at an initial mining rate of 4 Mt/y. The DFS estimated Platreef’s initial, average annual production rate would be 476,000 oz of platinum, palladium, rhodium and gold, plus 21 MIb (9,525 t) of nickel and 13 MIb (5,897 t) of copper.