Rajant Corporation, the provider of Kinetic Mesh® wireless networks, has announced two new products on day one of MINExpo 2021 in Las Vegas, Nevada.

The latest enhancements include the addition of a global LTE radtio to its fourth-generation BreadCrumb® Peregrine product line, and the launch of MeshTracer a software-based personnel and asset tracking solution that, Rajant says, can monitor Rajant BreadCrumbs, AeroScout tags and any Wi-Fi device that uses a static MAC address.

The addition of the global LTE radio means that with one 2.4 GHz radio, two 5 GHz radios and LTE, the enhanced Peregrine can provide up to 2.633 Gb/s of aggregated capacity, the company says.

Geoff Smith, EVP of Sales and Marketing for Rajant, says: “Improving the safety and productivity of mining operations is the by-product of Rajant Kinetic Mesh. It is the only industrial wireless network enabling machine-to-machine connectivity and mobility in markets like open-pit and underground mining”

“Adding an LTE client now allows all mining companies that have invested in LTE to leverage that infrastructure while benefiting from the mine-wide mission-critical coverage Kinetic Mesh provides.

He added: “Tracking personnel and assets is mandatory underground, making Rajant’s latest MeshTracer a logical addition to the BreadCrumb portfolio. Adding the ability to track BreadCrumbs both above and below ground allows a mine to observe areas for process improvements. Finally, supporting Wi-Fi devices allows for two-way communication in emergencies.”

Chris Acton, General Manager for Acubis Technologies, the largest Rajant Kinetic Mesh “Premier Partner” in Australasia, said: “We are ecstatic with the performance we have seen in the new Peregrines that we have deployed throughout Australia. Our customers see as much as four times the increase in capacity over the previous generation.

“Rajant provides unique value by maintaining backward compatibility with previous generation BreadCrumbs deployed in the field. This allows sites to upgrade between models knowing that there will be no loss to communications.”

He added: “We also have many customers in Australia who have invested in LTE solutions but are experiencing coverage and data upload issues. These customers are very anxious to deploy the latest LTE-equipped Peregrines. And being able to now track BreadCrumbs as well as personnel above and below ground provides critical new benefits for our customers.’’

Rajant is now looking to leverage the leading wireless network expert status it has built up in the open-pit mining space for the benefit of the underground mining sector.

At the AIMEX 2019 event in Sydney, Australia, last month, Mike Foletti, Sales Director, Asia Pacific, and Geoff Smith, Executive Vice President Global Sales and Marketing, talked IM through the move, explaining that the exclusive provider of Kinetic Mesh® wireless networks had teamed up with other firms to ensure its below ground offering is as complete as can be.

The underground solution the company was pushing for the first time at the event has been made possible by the strategic partnership between Rajant, Poynting Antennas, Extronics, and Australian Droid + Robot, the company said.

As part of this, Extronics rugged and intrinsically safe AeroScout Wi-Fi-based active RFID tags for personnel and asset tracking operate in real time over Rajant’s network, never breaking for handoff. With location tracking precision of about 10 m, the tags can be used to identify productivity bottlenecks for improved operational efficiency, Rajant says. And, lastly, Australian Droid + Robot’s Explora droids (one pictured at AIMEX 2019), which Australian Droid says have “ridiculous amounts of traction and agility”, come equipped with Rajant BreadCrumb technology. This allows the small all-terrain robots to carry out underground inspections, enabling the machine to independently scan, sense, and explore locations that may be hazardous to miners. 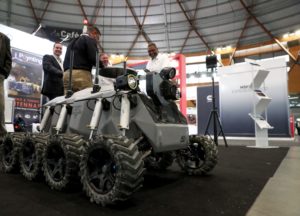 While this is the first time Rajant has talked about this underground solution, it has already been deployed at one mine site, according to Foletti.

“This is basically an enhancement on any fixed solution that is installed underground,” he said, explaining that the high throughput and low latency network benefits open-pit miners have received above ground for many years, is now be translated into underground mines.

While Rajant will continue to service the open-pit sector as it has beforehand, providing the type of robust network solutions it has for more than a decade, its decision to move underground is easy to understand.

For starters, many of the big open pits are reaching the end of their mine lives, with mining engineers now planning for underground operations.

At the same time as this, underground mines either in development or production are expanding operations at a pace that makes it hard and expensive for fixed or conventional wireless network solutions to keep up with.

Rajant explains: “Underground mines and tunnels are some of the most challenging environments in which to deploy network systems. Connectivity and throughput demands are high, but circular ramps and declines, stopes, and mine layout place limitations on how far wireless signals can travel.

“Many mines, therefore, depend on fibre to achieve reliable underground communications, but installing fibre in active drives, panels and declines is difficult to schedule and can create operational and maintenance nightmares.”

In addition, development plus drill and blast areas can rarely support fibre infrastructure. “It is not uncommon for trucks to accidentally catch and rip down sections of fibre and when that happens connectivity across the entire underground mine can be lost,” Rajant said.

In Rajant’s Wireless Mesh solution, BreadCrumb nodes act independently of each other. This means if one node is damaged or has an issue, the system continues to operate by using another communication route. In addition, the underground solution boasts the highest data throughput on the market, according to Foletti; latency is less than a millisecond, he added. Both features will become even more important as the industry continues its transition to automation.

Smith and Foletti said the company chose AIMEX 2019 and the Australian market to launch this solution as the company already has 35 installations on surface in Australia, at operations owned by some major mining companies, such as Anglo American. Anglo, in fact, is standardising all its global operations with Rajant Wireless Mesh network technology, according to Smith.

The Rajant team is confident these companies and others will see there is a strong investment case for introducing Wireless Mesh underground, too.

In addition to gaining traction with mining companies, Smith and Foletti said Rajant had been making inroads with equipment manufacturers, fleet management providers and other service providers in the mining ecosystem.

Smith mentioned Wabtec (now GE Wabtec) had made an investment in the company as it looked to incorporate its wireless communications technology into its rail systems, while Japanese conglomerate Mitsui had created a strategic partnership looking to rollout Rajant’s technology across several of its portfolio companies.

Despite the introduction of LTE and 5G technology to the underground environment, Smith and Foletti believe there is still a business case for Rajant’s Wireless Mesh technology.

As Foletti said, “If they [the mining operation] move[s], that’s where Rajant comes in.”

This is likely to see the communications infrastructure installed alongside other technologies in the future such as LTE, fibre and 5G in rapidly expanding mining areas such as development and production.

Rajant, the exclusive provider of Kinetic Mesh wireless networks, has entered into a strategic partnership with UK-based Extronics to help track workers and personnel underground.

Extronics provides a wide range of Wi-Fi tags for personnel and assets tracking and, combined with Rajant’s latest firmware, 11.19.1, its AeroScout tags are now intrinsically safe and certified for use in hazardous work areas, according to the company.

Geoff Smith, Rajant’s Executive VP of Sales & Marketing, said: “Rajant’s latest firmware release, 11.19.1, provides Extronics Wi-Fi tags with intrinsically safe support when using Rajant’s LX5, ME4 or KM3 network. This is especially relevant to personnel tracking, which is a requirement for underground mines, and other industries, such as oil and gas, petrochemical and ports.

“Given Rajant’s fully mobile private wireless network never breaks for handoff and always seeks the most efficient data path, customers using Rajant technology will not only be able to track personnel, but also identify productivity bottlenecks to improve operational efficiency.”