As the application of automation in underground mines accelerates, several companies have started exploring 5G communications developments in order to handle the massive amounts of data that is being generated from autonomous equipment.

One company interested in exactly this is Volvo CE, which earlier this year, in co-operation with Telia and Ericsson, launched Sweden’s first 5G network for industrial use at its facility in Eskilstuna. The partnership could see the mining and construction equipment company become one of the first in the world to use 5G technology to test remote-controlled machines and autonomous solutions.

IM, as part of its annual focus on Nordic Suppliers (to be published in the June print issue), put some questions to Calle Skillsäter (pictured below), Volvo CE’s technical specialist for ‘Connected Machines’, to find out more about this collaboration and understand what hurdles companies are facing when trying to implement such communications solutions.

IM: What is the justification for investing in 5G technologies with Telia and Ericsson? How much of your equipment is currently controlled remotely or autonomously?

CS: Connectivity is a crucial enabler for automation, which is why this 5G project is so significant for us at Volvo CE and for the construction industry as a whole. We also believe that automation technology is at its most efficient when it is run hand in hand with electromobility – as we demonstrated through the Electric Site quarry project.

Thanks to a prior research collaboration with Telia and Ericsson, in the Pilot for Industrial Mobile Communication in Mining (PIMM) project, and now this established Telia Journey to 5G Partnership Program, we have the possibility to test future connectivity solutions for our machines in mining applications, as well as other potential applications.

Currently we are focusing on our L180H wheel loader remote-controlled prototype, but will soon test 5G on the HX2 concept (pictured above) autonomous hauler as well. There are no autonomous or tele-operated machines from Volvo CE available on the market today.

IM: Most of the 5G investment in mining has, so far, come from the Nordic region; why is this?

CS: That’s right, we do have a rather unique setup in that many Nordic companies are at the absolute forefront of their industries with this technology. Mining companies like Boliden and LKAB are driving the business to be more intelligent and automated, Ericsson & Telia bring the connectivity perspective, ABB bring their experience of automation into the process industry, and Volvo CE and Epiroc bring the machine perspective. It’s certainly the case that the Swedish engineering mindset is very open and collaborative, which is what you need to be if you are to explore the potential of new technologies and new ways of working. We are a small country and we need to collaborate and be on the edge of technology to stay competitive.

IM: Do you expect this region, in addition to Canada, to offer the most immediate potential for 5G automated and remote-controlled technologies in mining?

CS: As I’ve mentioned earlier, we have all ingredients available in the Nordics to succeed in this transformation towards more connected and automated mining solutions. Another strong reason is that we have high demands on health and safety for the people working in the mines. Automation is a key way to improve site safety and reduce the dangers and accidents associated with mining. In addition, automation is our key to staying ahead of our competitors. 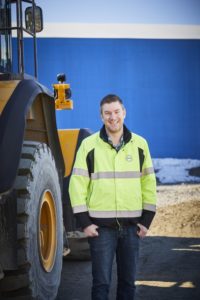 IM: What testing have you so far been able to carry out at Eskilstuna? What results have been achieved?

CS: We quite recently inaugurated the new test area for automation and tele-operations, so we are still in the early phase. The initial focus is on the tele-operation of the remote-controlled wheel loader L180H, but we will very soon start testing 5G for the HX2 autonomous hauler concept machine. At the moment, it is too early to reveal any results.

IM: When do you expect to be able to test this out in a real-life underground mining environment?

CS: Tests have very recently been performed within the PIMM Digitalized Mining Arena (DMA) project in one of Boliden’s mines, using LTE wireless 4G communications, the results of which will be announced next month. Testing on a customer site with 5G is not planned yet.

IM: When comparing 5G to 4G technologies, what are the main benefits for mining companies when it comes to using this newer communication infrastructure (aside from lower latency, bandwidth, quality of service, positioning, etc)? What sort of impact could it have on operating costs considering the improved accuracy/responsiveness it brings to automated and remote-controlled operations?

CS: The main benefits are, as you say, lower latency, bandwidth and the quality of connection. But lower latency will also mean that tele-operated machines are more responsive, therefore resulting in much higher productivity. Higher bandwidth also means better video quality, which means a better work environment for the operator. Better video quality also creates a better feeling of presence, which helps to improve productivity. Quality of Service will mean machines are up and running for longer.

IM: How far is the industry away from employing these 5G solutions commercially? What are the three biggest hurdles to achieving this milestone?

CS: It’s too early to say when we think customers will be ready to see 5G solutions available commercially. But the biggest hurdles are:

IM: Do you expect underground mines of the future to be run solely off 5G networks? Or, do you expect a combination of 5G/Wi-Fi?

CS: There is a potential for mines to be run only on 5G in the future. But this is one of the questions that we hope to be able to answer in our coming tests and collaboration with our partners.

A 10-week research project electrifying and automating the majority of equipment at Skanska’s Vikan Kross quarry, near Gothenburg, Sweden, has seen a 98% reduction in carbon emissions, a 70% reduction in energy cost and a 40% reduction in operator cost.

The Electric Site research project, conducted by Volvo Construction Equipment and its customer Skanska, were even better than expected, the two companies said. As a result, the test period has been extended until the end of the year.

IM has been on site at the project today and witnessed the machines in operation.

Together, these results support the potential for a 25% reduction in total cost of operations, Volvo said, explaining the reduction in total cost of operations is just a prediction at the moment.
“As the prototype machines are part of a research project and are not commercially available, it is impossible to give a guaranteed figure,” the company said.

“In fact, we have decided that we want to learn more, so we will extend our test period with Skanska until the end of the year. The results we have seen so far confirm that this research project is a step towards transforming the quarry and aggregates industry and creating emission-free quarries.”

The Electric Site project aims to electrify each transport stage in a quarry – from excavation to primary crushing, and transport to secondary crushing. It incorporates electric and autonomous prototype Volvo CE machines, new work methods, and site management systems, which together form a complete site solution. New technology encompasses machine and fleet control systems and logistic solutions for electric machines in quarries.

Anders Danielsson, President and CEO of Skanska, said: “With climate change reshaping our industry, we need to find new, sustainable solutions and build partnerships with organisations that have different competencies.

“Our ambition is that this collaboration with Volvo CE will help us and our customers to reduce our carbon footprint. The power of partnership will make it happen.”

Melker Jernberg, President of Volvo CE, said: “At Volvo CE, we believe in a sustainable future and we are doing our best to build the world we want to live in. The Electric Site is one example of how we are trying to achieve this. With this research project we are combining intelligent machines, automation and electro-mobility to challenge traditional ways of working in the quarrying industry and explore new alternatives.

“We will now further mature the technologies involved and the reliability of the concept. Developing, testing and validating prototype machines with a customer at an early stage in the process speeds up development and ultimately brings more value to us and our customers.”

The Electric Site project involves eight HX2 autonomous, battery-electric load carriers, which transport the material from the primary mobile crusher up to the secondary static crusher. When it came to energy use per tonne, the HX2s proved they could help Volvo CE take a big step towards achieving its future vision where work sites are 10 times more efficient, the company said.

The second-generation prototypes incorporate shared technologies and components from the Volvo Group. They use a lithium-ion battery to power two electric motors which drive the machine; the hydraulics are driven by an additional electric motor. The HX2 is fitted with a vision system, which allows it to detect humans and obstacles in its vicinity. It can follow an adjustable, pre-programmed GPS path.

The LX1 prototype electric-hybrid wheel loader delivered more than a 50% improvement in fuel efficiency at the quarry, as well as significant reductions in emissions and noise pollution, compared with its conventional counterparts. Its job was to organise the piles of material at the site.

The LX1 is a series hybrid that incorporates a driveline that consists of electric drive motors mounted at the wheels, electric-driven hydraulics, an energy storage system, a significantly smaller diesel engine and new machine architecture, including a new design of the lifting unit. It’s this combination that enables the substantial gain in fuel efficiency.

The EX1 70 ton, dual-powered, cable-connected excavator prototype loaded the primary crusher at the quarry. The base machine for the EX1 is a Volvo EC750 crawler excavator that has been upgraded to incorporate an electric motor in addition to the diesel engine. At the quarry, the machine was plugged into the grid, so zero emissions were emitted.

If the cable is connected, the EX1 will automatically start in electric mode. If not, it will start in diesel mode. The EX1 is operated in exactly the same way as a conventional Volvo excavator.