As part of plans to establish a sustainable footing for its South Deep mine in South Africa, Gold Fields is trialling teleremote loading in a project with automation specialist RCT.

Gold Fields’ problems at South Deep have been well documented, with the company, in 2018, launching a restructuring plan involving the reduction of mining areas, the lowering of overhead costs and an aim to use fewer machines more productively. This followed significant amounts of investment and continued underperformance at the mine.

It is the latter productivity goal that has led the company down the teleremote loading path.

In the June quarter of 2019, Gold Fields commenced non-line of site remote loading training at South Deep. Phase one of the project was to locate the operator control station in close proximity to the underground loading site, according to the company.

A surface automation chair was ordered from RCT, installed and commissioned in the centre and the company started the process of training up operators.

The interoperability of these systems allows for the seamless integration into any mine’s ecosystem, according to RCT.

Preece said Gold Fields’ approach with all technology is to trial with limited application, to develop and prove the technology, followed by rapid roll out.

“We are still in the first phase of the project and are learning and adapting our approach as we progress to perfect the system before broader application,” he said.

This first phase already has the company using one Sandvik LH514 LHD for teleremote loading operations in the long-hole stope loading areas of South Deep during shift changes. As Preece explained, the RCT technology allows for the LHD to tram between loading and dumping locations, and back autonomously with operator intervention only required when loading and tipping the LHD.

RCT has provided the on-board sensor technology, the network infrastructure in the working areas, the safety application and the surface operating chair – the Operation Automation Centre – located in the surface control centre, he said. 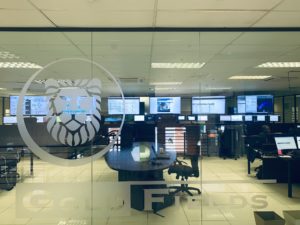 This teleremote loading technology is, essentially, adding loaded tonnes to the operation where there previously was none, coming close to ticking off the ‘use of fewer machines more productively’ criteria Gold Fields previously set out in its turnaround plan. While not explicitly stated by the company, one would expect it helped South Deep achieve a 36% year-on-year boost in long hole stoping volumes mined, to 631,000 t, in 2019. Overall, Gold Fields said the mine produced 222,000 oz of attributable gold last year.

Preece said the technology it is trialling has been de-risked in the respect that it has been proven in many applications globally, and the company had very clear safety and commercial imperatives for it.

“The success of any change intervention is to ensure that the application becomes an enabler rather than a distraction for our frontline teams,” he said.

“We would like to believe we are close to operational deployment. Most of the initial challenges experienced with the technology itself have been addressed; the underground mining team is taking ownership by addressing the operating conditions. Furthermore, a second round of operator and maintenance training has been conducted.”

While the trial is currently limited to long-hole stope loading in between shift changes, in time, teleremote loading in development and destress areas of the mine could also be possible, Preece said. With plans to equip more machines in 2020, the results could get even better.

“The project business case is based on being able to continue loading over shift changes, so there is further upside when we add in the in-shift productivity gains as well as improvements to the development and destress mining cycles,” he said. “Our approach to expanding the rollout is that it must be self-funding – the value generated by the first deployment must fund the rollout of subsequent deployments.”

The company’s ultimate goal is to be able to operate LHDs continuously for 22 hours a day (the limit the machine can safely operate between refuelling, safety inspections and pre-start inspections, according to Preece), but there is more to achieving this aim than just rolling out teleremote LHDs.

“A pre-requisite for loading during shift changes is to be able to break big rocks in the tipping bins,” Preece said. This is where the successful deployment of teleremote rock breaking, operated from the same surface control centre as the remote LHDs, comes in.

Then there are the interactions with other equipment and, most importantly, people to consider.

“When operating the teleremote machine, the whole area has to be barricaded, isolated and protected by laser barriers, which, if breached, force the machine to stop automatically,” he said. “This will limit the application to areas which we can isolate.”

In areas where personnel are required to perform drilling, supporting, backfilling and other activities, the area cannot be completely isolated and the LHD cannot function optimally, according to Preece.

Similar technology deployed for trucks would be another future area of focus, according to Preece, while he said the mine was also in the early stages of trialling automated long-hole drilling in stopes over shift changes.

South Deep is one of the deepest mines in the world, going to depths close to 3,000 m below surface. Even so, depth is not one of the main business drivers for the increased take up of teleremote operations, according to Preece.

“Safety benefits and the time a machine can effectively be utilised make up for the bulk of the return on investment,” he said. “The challenge with deeper mines are on the support side; if the network infrastructure is in place, it should be the same for shallow or deep mines. For deeper mines, it will take longer to get maintenance and instrumentation support to the machine if something goes wrong.”

Still, could full automation be on the cards?

“Yes! Loading activity remains the most challenging given the variable fragmentation of material,” Preece said. “Operators still need to perform the loading and tipping activities.”

These teleremote and automation projects, on top of personnel and mobile equipment tracking systems previously mentioned in the company’s 2019 annual report, bode well for future automation take up at South Deep, as well as the success of Gold Fields’ turnaround plan for the asset.