Epiroc says it recently launched an offering that aims to support safety in underground mining environments with the RCS based Collision Avoidance System (CAS) interface.

Proximity Detection System (PDS) suppliers, compliant to the ISO 21815-2 Draft (March 2018), are able to interface with Epiroc RCS Materials Handling TMM (Trackless Mobile Machinery) to enable functionality for slowing and stopping, in what the PDS perceives to be a hazardous or unwanted event, Epiroc explains.

The interface allows for third-party systems to communicate with Epiroc’s Rig Control System, RCS, in a completely new way, Epiroc claims. This enables a third-party PDS added to the vehicle, when needed, to take interventional control of the machine and prevent accidents.

The CAS Interface, when coupled with a PDS, helps to detect objects in the collision risk area, evaluate the collision risk level and take interventional actions to avoid the potential collision, the company says. The system works on the understanding that all machines and all personnel in the mine are equipped with tags or sensors.

“A CAS installation is intended to assist with operator perception of potential hazards around the machine and prevention of potential incidents where operators cannot respond in time, however the overall responsibility for safe operation of the machine remains with the operator,” Epiroc said.

Daniel Sandström, Global Product Manager-Minetruck, in Epiroc’s Underground division, said: “With safety first and always in mind, I am proud to see the release of the Collision Avoidance System interface. This improves safety underground in a ground-breaking way.”

The CAS interface, which is now available for the complete Epiroc RCS Loader fleet as well as for Minetruck MT42 and soon thereafter for the Minetruck MT65, has been tested by customers, who have been pleased with the performance and functionality, Epiroc said.

“The CAS initiative is not a ‘plug and play’ solution and must be tailored, with the participation of all parties to suite a particular site. Change management and risk mitigation strategies on these sites are key when implementing the system.”

Moving forward, Naidu can see further potential: “Solutions like Mobilaris On-Board can augment a mine’s efforts to ensure safety, as well as create a more ‘natural’ state of awareness that underground TMM operators can respond to. With an interface that is more familiar to the operator, who typically drives commercial vehicles (GPS, Waze, Google Maps), their reflex is to naturally avoid a potential unwanted event from occurring. An operator or pedestrian that is equipped with real-time information about their surroundings, through systems like Mobilaris’ MMI, On-board and Pocket Mine, will be better suited to promote a safe working environment; one in which the CAS slow down and stop functionality is a last resort in preventing collision events.”

Epiroc is part of the ISO standard working group where new standards are being developed. It is also participating in the International Council for Mining and Metals (ICMM) initiative for Vehicle Interaction.

Faced with the challenge of boosting productivity and lowering costs, Chile-based copper miner Pucobre has teamed up with Epiroc to implement the first Rapid Mine Development (RMD) project in the country.

Combining technology and changes in mindset to build high-quality mine infrastructure, the company is now on a path to become a 4.0 mine, Epiroc says.

In 2016, Pucobre, a selective underground copper mining company, was faced with a conundrum: grades at its deposits were falling, and global red metal prices were unstable.

The company knew it needed to change to remain competitive and began looking for ways of working that were more productive, efficient and cost effective. That is when the idea of Rapid Mine Development (RMD) appeared on the horizon, Epiroc said.

“RMD is a method for making higher-quality tunnels, faster in the underground mine development cycle,” it said. “What previously depended largely on the skill and experience of the drill operator and explosives technician are now computer-supported tools for standardisation and optimisation.

“For Pucobre, RMD has meant not only a change in technology but also a cultural change oriented toward quality and discipline.”

The project started as part of a strategic partnership with Epiroc, unique in Chile, which commenced with a contract in 2017 to replace Pucobre’s truck and loader fleet with Minetruck MT65 trucks and Scooptram ST18 loaders, vehicles with higher capacity.

The partnership was unique because it guaranteed the mechanical operability of the equipment over its working lifetime, Epiroc said. This is nine years in the case of the trucks, and 5-6 years for the loaders. The previous vehicles used by Pucobre had to be changed every 2-3 years, which led to the first in many steps of change management for Pucobre, with more focus on complete maintenance of the vehicles to ensure their longevity.

On its premises in Atacama desert, Pucobre set up a training centre with simulators to instruct drivers how to handle these new vehicles, installed a maintenance workshop, and had Epiroc staff permanently on site to jointly solve problems that might arise. Encouraged by this experience, Pucobre and Epiroc began to explore new ways to streamline the operation.

Sebastián Ríos (pictured below), CEO of Pucobre, said: “Epiroc has always shown a great disposition for solving problems and working to ensure that the trucks and loaders are successful.” 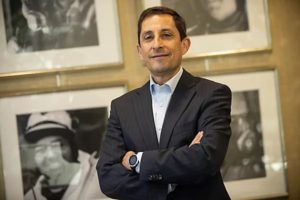 According to Marco Troncoso, Pucobre’s Mining Operations Head, before embarking on RMD, the company’s way of working was “very dependent on specific skills of its people”, with Pucobre keen to leverage technology and improve the efficiency of its workers.

Troncoso said: “Epiroc said to us: ’let us help you build the new house in which you will live for the next 30 years.’ Once you get used to doing things in a quality way, the results improve.”

Epiroc visited Pucobre’s three site operations near the northern city of Copiapó, and Pucobre came up with a three-year development plan (2019-2021) to boost productivity by 40% and reduce costs by 25%.

Pucobre and Epiroc went on site visits to Australia, Nevada (USA), Sweden and Canada where the company could see leading mining companies using Boomer face drilling rigs in action, as well as the new concepts of mine management, which would also be adopted.

Two alternatives were proposed to help Pucobre meet its goals. One was to use multi-role face drills, like in Australia, which combine blasthole drilling and rock reinforcement such as scaling, bolting and meshing in a single rig. The other alternative was RMD, a method which promises longer rounds, higher accuracy, reduced overbreak and better quality tunnels, Epiroc said.

“Most importantly, with the latest Boomer S2 rigs – equipped with ABC Total, a smart function that allows for complete automation of the drilling process – RMD offered a path that would enable the machinery to operate autonomously during lunch breaks and shift changes, thereby resulting in more productivity gains,” the company said.

Once Pucobre had opted for RMD, the company invested in four of the latest Boomer face drilling rigs and three Simba production drill rigs. To monitor development and meet key performance indicators, Pucobre went digital, building a new Mining Operations Centre on site. In the future, the company is expected to deploy Epiroc’s 6th Sense Mine Management Solution, which combines the Mobilaris scheduler and other task management and reporting features, as well as the Certiq telematics solution, which gathers, compares and communicates vital equipment information to the surface. 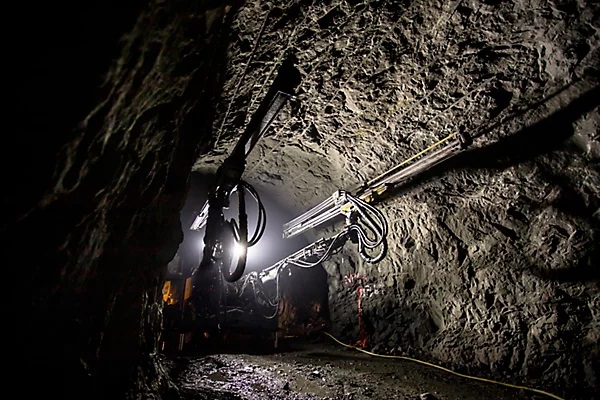 Investing in and betting on RMD has meant a major leap of faith on the part of Pucobre. The total investment over the nine-year contract period is likely to reach $60-70 million, factoring in machinery, spare parts and technology. There have also been major time investments in training and change management.

Ríos said: “This is the biggest change in Pucobre in the last 30 years.”

A big challenge for Pucobre was the increased development rates over the coming years, which came with a significant cost increase. Cost estimations prior to project start showed significant cost savings by using RMD to prevent this.

Change management has been the other major challenge on this journey, adapting attitudes and skill sets to the new ways of working. Pucobre introduced Short Interval Control (SIC), which is a structured process that measures short intervals of production to identify opportunities for improvement.

To manage the operation, it is necessary to have as much information online as possible, such as the location of vehicles and work plans for the day, so that personnel in the Mining Operations Centre can make decisions and improve productivity.

Ríos said: “The engineering department had to modify how it plans, now with shorter intervals. What was previously done in the field now has to be carefully planned and coordinated before it is executed.”

Cultural differences between the Swedish and Chilean way of doing things have required compromises on both sides and commitment and team work to make this unique joint venture successful.

The RMD project at Pucobre is being implemented in four stages. After getting used to using standardised, computerised drill plans using navigation methods, the project has now moved to a second stage – to optimise the machinery to extend explosive rounds to 4.4 m, from 3.8 m. The goal is to reach 95% of the blasting target with less than 5% underbreak or overbreak and to increase development rates from 1,100 m/mth to 1,400 m/mth.

But the principal objective is to reach stage 4, where drills can operate autonomously during lunch and shift breaks using the ABC Total smart function. 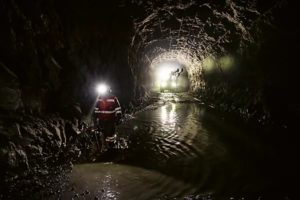 Progress has been fast, according to Hilario Arce, Head of Pucobre’s mining operations. With the Minetruck MT65 trucks and Scooptram ST18 loaders, Pucobre has already increased its monthly mineral extraction to 460,000 t, from 333,000 t previously. Two of the three mining sites are now operating 100% RMD, the third one is coming soon. Operators are getting close to the 95% blasting target, and Arce is confident 60-70% of drilling will be automated come March 2021.

The Epiroc Simba 7 long-hole rigs are the most advanced to date in Punta del Cobre in terms of the use of ABC Total, but the system will start implementation in Boomer rigs in December.

Working closely together has been key for Epiroc to build trust, says Charlie Ekberg, General Manager of Epiroc Chile, who underscores that demonstrating success with Pucobre will be key for winning similar projects elsewhere in Chile. Epiroc is also betting on introducing teleremote technology for mine loaders and battery-powered trucks in Chile next year.

“That’s why we put so much effort into training,” Ekberg said. “It’s not just about selling the machine. We want the equipment to work and, if a machine is standing idle, we want to know why. We’ve had to learn how the customer thinks and always be one step ahead.”

In terms of results and costs of the overall project, Pucobre is still only halfway to where it wants to be, according to Ríos. But he knows Pucobre is on the right path.

He said: “There are still gaps. Sometimes the trucks aren’t loading to their full capacity, or the loading cycle and return to the surface is taking longer than planned. That equation still has room for improvement.”

It has been a learning experience for both Epiroc and Pucobre. Overly ambitious KPIs and targets set at the beginning have had to be modified to suit the pace of progress and time needed to train with this new way of doing things. That is where change management has been one of the biggest challenges.

“There are many things that change in the day-to-day operation,” Ríos said. “You contract new people, new technology, there is a change in planning. You have to look at the way that people adapt to this new way of working.

“You have to support people in this process so that it flows with the help of the human resources department. Change is difficult. It’s like working from home, which many people have done this year. You have to manage it well, for it to be successful. We trust our people will do it.”

This first appeared as an Epiroc customer story here.