Sandvik Mining and Rock Solutions is set to unveil three new underground drilling solutions at MINExpo 2021 in Las Vegas, based around a common theme of electrification, sustainability and digitalisation.

The new products to be unveiled at the show, taking place from September 13-15, include a new battery-powered bolting rig, an accompanying portable training simulator and a new mobile application for enhanced drilling.

The rig’s iSeries platform offers various levels of automation for rock support drilling as well as providing component commonality through the 400i drill range. The introduction of Sandvik DS412iE rounds out Sandvik’s first range of battery-electric vehicles for all underground drilling applications, according to the company.

Sandvik Digital Driller™ training simulators provide a compact and flexible solution to safely train underground drill rig operators or maintenance teams, the company says. The latest Digital Driller module is specifically designed to support the new Sandvik DS412iE battery-electric rig, with the new version retaining the key features of being low weight and highly portable, enabling it to be used where it is most needed – on site.

Use of the simulator is estimated to increase annual productivity by 5% due to increased rig availability alone, Sandvik claims. In addition, training costs are reduced by up to 35% through less energy and consumables costs and reduced rig damage.

The new Sandvik DrillConnect mobile application transfers drilling plans – including those created in iSURE® – drilling reports and MySandvik machine data in environments where network coverage is inadequate or not available. Sandvik DrillConnect removes paper-based processes and automates the data transfer between the office and drill rig via a customer’s preferred mobile device. The app also provides easy access to the machine’s troubleshooting and manuals and is designed to be scalable for future development, according to Sandvik. The first version will be compatible with iOS devices, with plans to introduce Android compatibility in future iterations.

Patrick Murphy, President of Underground Drilling at Sandvik Mining and Rock Solutions, said: “Our latest developments are based on the feedback we have received from customers. We have listened to their challenges and are developing solutions that ensure we will continue to lead the industry shift toward a more digitalised and electrified future.”

Sandvik Mining and Rock Solutions’ newly launched technology centre in Harare, Zimbabwe, is, the company says, assisting the region’s mining industry on a journey into the digital future.

“Our starting point was an OptiMine implementation for the monitoring and tracking of underground mobile equipment and customer support for a MySandvik project,” Molife says.

He explains that hardware is installed on the equipment, together with the software, to gather and transmit operational data, allowing mine management to view equipment location and productivity at any time. The data is automatically analysed giving the customer decision-making dashboards.

Ian Bagshaw, Sandvik Mining and Rock Solutions Territory Manager, says the technologies employed by the company essentially ‘take the lid off’ the mine, revealing vital real-time information such as tonnes mined and holes drilled. The technology centre can make use of various Sandvik solutions to render the data useful to the customer. These include MySandvik for equipment monitoring using up-to-date information, OptiMine for integrating resources and optimising processes and AutoMine for automating mining activities.

Bagshaw highlighted that the Sandvik Technology Centre has been welcomed by technology-focused customers in the region.

“These customers are certainly leading the way globally in the platinum mining sector,” he says. “There is a strong safety element in the digital journey, as machine automation can help keep operators away from the workface and other potentially hazardous areas of the mine.”

There are already three projects underway at the technology centre, according to Molife. The MySandvik solution is being provided to 100 machines on one site, while OptiMine is being installed on a 76-unit fleet and AutoMine is initially being used to create a trucking loop for a single unit pilot project.

“The beauty of our facility is that it can be quickly ramped up as demand grows, allowing us to serve a growing customer base as mines see the practical value of applying digital technology,” Bagshaw says. There has been considerable interest expressed by the region’s mines to date, with potential projects for the technology Centre emerging in South Africa, Botswana and possibly further afield.

According to Bagshaw, applying Sandvik’s digital solutions is the beginning of a journey for mines, as they move away from paper-based and static data platforms.

“In addition to installing the hardware and software to generate real-time data for mines, we also work closely with customers on how best to utilise the reports,” he says. “Building these reports into their daily operations and real-time decision making will bring the productivity value add.”

Back in October after Sandvik’s Innovation in Mining virtual event, the company confirmed to IM that it was testing a battery-equipped prototype DL422iE unit in Canada ahead of a planned launch in the March quarter of 2021.

The new Sandvik DL422iE is designed for underground mass mining in 4 x 4 m or larger production drifts. It features the latest intelligent technology to enable continuous and unmanned operation, with automation and teleremote for drilling during shift changes and breaks, Sandvik says. Through these and other features, combined with data collection and transfer through wireless networks, the Sandvik DL422iE helps to ensure improved equipment utilisation and productivity.

The new longhole drill is capable of drilling vertical and inclined fans and single or parallel Ø89-127 mm long holes up to 54 m in depth using ST58 and ST68 tube rods. It is equipped with the powerful 33 kW HF1560ST longhole rock drill, which is based on a proven concept in terms of drilling capacity, reliability and operating cost, the company said.

With an impact frequency of 40-45 Hz and optimised percussion dynamics for ST68 tubes, the Sandvik DL422iE delivers optimal bit-to-rock contact for improved energy transfer, according to Sandvik. This leads to decreased stress level in rock tools, lower coupling/front housing temperatures and extended service life for shank adaptor and tube.

As standard, the Sandvik DL422iE is equipped with Sandvik’s Platinum drilling automation package for continuous and automated production drilling. This is combined with the i-Class iSOLO drilling control system to maximise productivity and enhance accuracy in drilling fans and parallel long holes. “It acts as a full-time stinger control and is used in uploading drill plans to the control system, with drill plan management direct at the user interface to ensure one-hole automation drilling to a predefined depth,” Sandvik says. “Furthermore, feed and boom positioning to the next hole are automatic, while data is transferred via WLAN ethernet connection.”

In addition to the standard Platinum package, the Sandvik DL422iE can be equipped with an optional automatic bit changer, enabling autonomous drilling of complete fans and working through shift changes.

On top of being equipped with MySandvik remote monitoring, units can also be integrated with AutoMine® and OptiMine®, providing multi-unit control and fan-to-fan remote tramming, Sandvik says.

The Sandvik DL422iE is mounted on a C400E 4-wheel drive frame steered carrier equipped with an electric driveline system (battery package and electric motor) for zero diesel emissions and reduced operating costs. The batteries can be charged during drilling in a newly patented feature, while electric power can be drawn from the electrical supply system from the mine’s network. 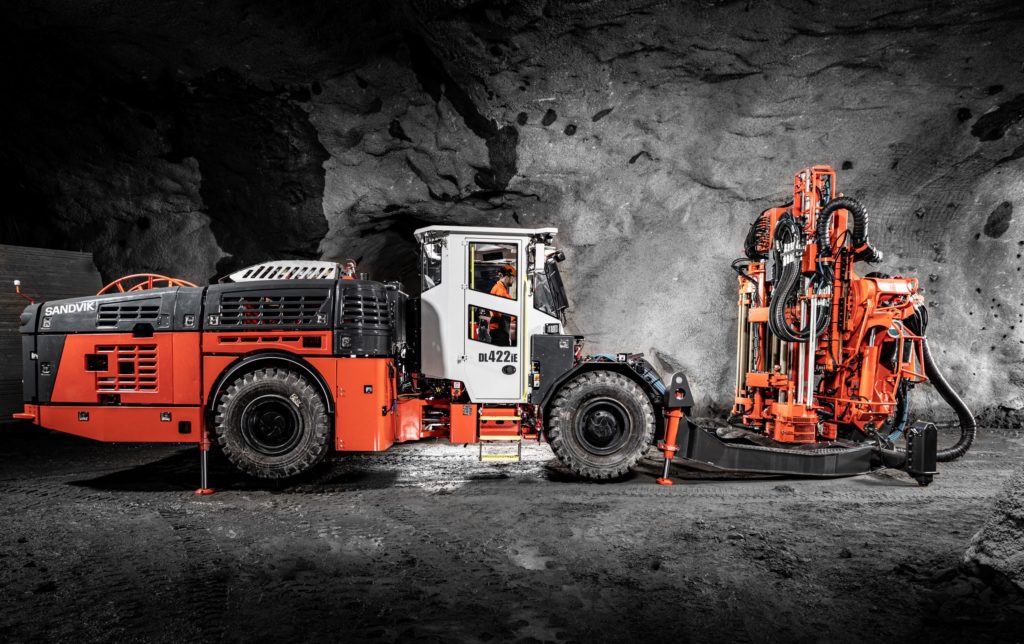 “[The] Sandvik DL422iE helps mines reduce overall emissions and ventilation and fuel costs, and to create a healthier working environment,” Sandvik says. “Thanks to shorter cycle times and increased drilling capacity, [the] Sandvik DL422iE has the potential to help mines increase drilled meters per shift by up to 10%. Productivity can increase by up to 20% via improved equipment utilisation.”

The longhole drill is equipped with the ZR35 telescopic boom and horseshoe type boom support with telescopic jacks for maximum drilling stability, the most effective foundation for accurate longhole drilling in mass mining, according to Sandvik. The wide 3,000 mm total boom offset and 620 mm telescopic extension allows a pivot line height of 2,100 mm, which is typical for a wide range of mining methods.

The 360º feed roll-over, large boom tilt and swing angles ensure fan drilling versatility in 4 x 4 m or larger cross sections and, to ensure maximum accuracy in alignment, the boom is instrumented with electronic parallelism. An optional extended boom support allows for up to +/-45° feed tilt in drilling fans or long holes, which, Sandvik says, increases versatility in downhole drilling in stopes at the end of the orebody, in drilling long holes in the ore/waste contact and in slot raise drilling.

Net penetration rates with air-mist flushing are up to 15% higher on the Sandvik DL422iE when compared with water flushing, according to the company. The drill rig can be equipped with a CT80 onboard screw compressor (8 cu.m/min at 7 bar), which ensures efficient flushing and high net penetration rates. The use of the on-board air supply, meanwhile, is a cost-efficient alternative to mine air infrastructure or portable units, the company says.