THEnergy and Voltalia’s latest report on the use of renewable energy in the Africa mining sector says the industry can realise significant cost savings when employing these power solutions.

The authors said the mining sector has shifted from phase one – where the focus of renewable power adoption was on integrating and testing out the reliability of these solutions – to phase two – where potential cost savings are being considered.

“In the last few years, more and more mining companies have adopted wind and solar systems to reduce their energy costs at remote off-grid mines,” THEnergy and Voltalia said. “In this first phase, the initial focus was on the integration capabilities as miners were afraid that adding intermittent renewables such as solar and wind could affect the reliability of power supply and even lead to production losses.”

In various microgrid applications, renewables combined with diesel, heavy fuel oil (HFO), or gas have proven to provide reliable power supply to remote mines, according to the two firms.

“For almost all mines, the integration of renewables will have a positive impact on their energy cost position. Mining companies do not have to invest their own money; independent power providers (IPPs) invest in the renewable energy infrastructure and sell electricity to mines through power purchase agreements (PPAs),” THEnergy and Voltalia explained.

“With the support of a leading renewable energy player, the new report analyses how IPPs can offer extremely competitive PPAs to remote miners,” he said. 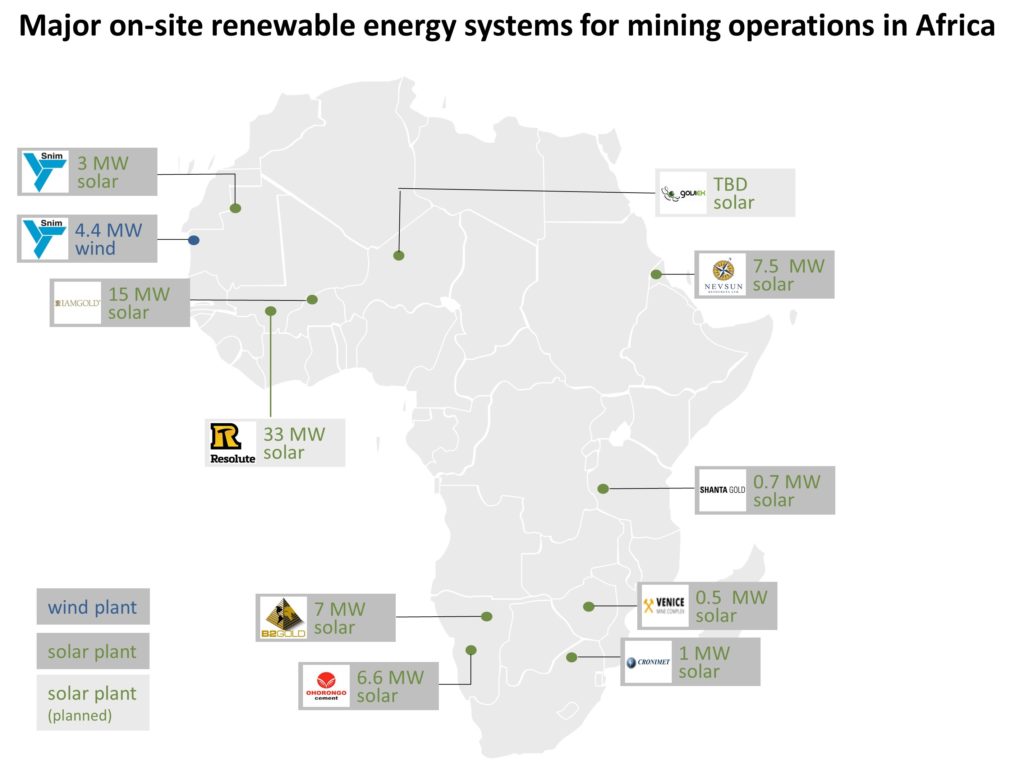 Large IPPs take advantage of economies of scale on components for solar and wind power plants not only for remote mining projects but also for much bigger grid-connected plants, the two firms said.

“Market leaders have managed to optimise the planning and construction processes substantially. However, conducting projects in remote locations, especially in Africa, requires an extended experience,” they added. Among the challenges of undertaking projects in Africa is financing, which requires relationships with local and international banks, according to THEnergy and Voltalia.

“Cost optimisation does not necessarily mean minimising capital expenditure but rather focusing on the total lifetime of the project and including operation and maintenance. It is also important to take the interplay of the different energy sources into consideration. Not every kWh of solar and wind energy generated means equivalent fossil fuel savings. When gensets run at suboptimal loads, they lose efficiency and require additional maintenance,” the two firms said.

Alexis Goybet, Head of Hybrid Solutions at Voltalia, a player in the renewable energy sector, said his company has much experience in renewable energy projects, including solar-diesel hybrid microgrids, projects in remote locations and in developing countries.

“Our experience adds up to our economies of scale in procurement and translates into significant overall cost-reductions in the range of 20-30% in comparison to new market entrants,” he said.

These overall cost reductions will make solar and wind energy extremely attractive for many mines, according to the two firms, with the number of remote mines adding renewables to diesel, HFO or gas expected to grow quickly all over Africa.

There are already several mining companies that have made – or are planning to make – this transition in Africa, as can be seen by the map above (credit: THEnergy, Voltalia). This includes Resolute Mining and its Syama underground gold mine in Mali, Newmont Mining and its Akyem gold mine in Ghana and B2Gold and its Otjikoto operation in Namibia.

In the past month alone, Barrick Gold and GoviEx Uranium have also stated plans to use hybrid solutions at their Loulo and Madaouela assets, respectively.