“Companies traditionally see mine development as a means to an end. You just want to get it done to get to the ore.”

Paul Klaric, Technical Manager at DynoConsult, Dyno Nobel’s specialist consulting division, is right. Mine development is all about metres per day/month. The accuracy of the drill and blast patterns, or the stability of the drives that are created, rarely feature in quarterly updates or investor presentations.

Yet, this short-term thinking – typically related to the need to improve a project’s payback period – is costing the industry millions of dollars of sustaining capital.

Dyno Nobel Vice President, Product and Applications Technology, David Gribble, explains: “There are some applications where you carry out this development and you come back a few years later and look to either rehabilitate or create new drives off of it.”

In underground mines with challenging ground conditions where drilling and blasting practices are lacklustre, this can create safety concerns.

“Companies are trying to mitigate any safety issues by working to remove people through automation and technologies such as wireless initiation – which is great – but we are of the opinion that part of the reason for these technologies is that the drives were damaged in the first place,” Gribble told IM. “If we can create competent drives with minimal damage from the off, then a lot of the issues that happen down the track – which we’re trying to mitigate against – should go away.”

This is where the company’s EZshot® electronic detonator comes into the mine development equation.

Offering users the benefits of accurate electronic timing without the complications that come with wired systems, EZshot has been designed with underground perimeter blasting in mind.

Utilising shock tube for signal transmission which Dyno Nobel has been producing since the 1970s, EZshot comes in a new colour with the same J-hook connection as NONEL, meaning no new training is required.

Factory-programmed delay times can range from 1,000 to 20,000 milliseconds, with long-period delay timing ideal for underground perimeter blasting, according to the company. This is helped by the electronic initiation unit inside the detonator, which eliminates scatter – an inherent property of traditional pyrotechnic systems, to ensure firing occurs at the pre-designated delay time (see video below).

These design elements all help confront the issue of overbreak in perimeter blasting, according to Klaric.

“A good measure of well controlled, smooth blasting is when you see ‘half barrels’ left behind, which are remnants of the holes that were blasted in the rock mass,” he told IM. This is sometimes witnessed in competent, homogeneous rock masses, but rarely spotted in poor, challenging ground where there is faulting, jointing or discontinuities.

“In such ground, there is greater potential for overbreak and damage after perimeter blasting,” Klaric said.

Gas from the explosives can be forced into the rock mass behind the blast design profile, he said, which can become a real hazard and precondition the ground.

Klaric explained: “Your profile might come out as designed, but there could be more damage beyond the perimeter. As you go to install your ground support, there is potentially an area of the drive where the ground support is going to prove ineffective.”

It is these challenging rock conditions where EZshot could provide the most value to miners, according to the company.

In fact, in trials at an underground mine where variable ground conditions and temperatures were observed, a 12% overall reduction (from 22% to 10%) in overbreak was observed with a switch from NONEL LP to EZshot detonators.

The benefits did not end there.

There was a measurable reduction in the volume of material scaled off the walls after using EZShot – thanks to the improved blasting profile – and initial calculations indicated a positive $/m benefit to development mining costs, according to the company.

Drill and blast overbreak reconciliation is another benefit of EZshot, Gribble says.

“When you just use pyrotechnic detonators, you are likely to break past the perimeter and then you have no idea of where you drilled,” he explained. “How do you then improve something you cannot measure?

“In a lot of cases, EZshot will tell you exactly where you drilled and if the perimeter holes were in or out of design. You can then look to improve from there.”

This could have positive knock-on effects for the rest of the development cycle – not just in terms of speed, but also cost.

“If you are starting to improve and get consistency in your blasting and the drives you are delivering, you can start to consider adapting your rock support measures,” Klaric said.

“It’s going to take time, but the potential is there for consistent results throughout the whole mine life cycle and to look at the drilling and blasting procedure at a much more forensic level,” he said.

While these benefits are applicable in all forms of mine development, it is long-life operations that are set to reap the most rewards from a switch to EZshot.

“This could be your block cave, or panel cave type of operations where some of those drives might be in place for 30-50 years,” Klaric said. “If you get development right in these applications, everything else will be right down the line.”

This means the South American copper industry – one that is progressively moving underground as operations mature – could be a potential market for EZShot. There are also a few famous block cave mines in Asia that could reap some serious value out of the product.

For the time being, the company is focused on further trials, which will provide the statistical firepower to get more miners to notice the product’s potential.

In Queensland, it has recently managed to conduct a few trial blasts, despite COVID-19 restrictions. 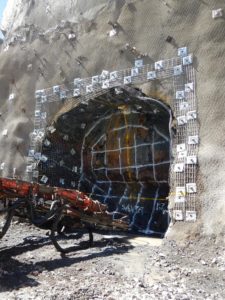 It has also trialled and used the product in the US and Canada, according to Dirk Van Soelen, Vice President of Initiating Systems Technology at Incitec Pivot, Dyno Nobel’s parent company.

Even during these testing times where travel is restricted, there is potential for further trials thanks to the product’s ease of use.

Van Soelen said: “Normally when you bring new technology in, you have to support the technology to the hilt.

“There is an element of that in EZshot as you want to get the measurements and feedback from case studies, but the beauty with it is you can send someone a box and they can use it tomorrow in the same way they use their current product.

“It is a seamless technology transition from the user’s perspective.”

Van Soelen concluded: “I think a big part of the appeal of EZShot comes from the fact that you get ease-of-use and repeatability with this product.

“This repeatability, from blast to blast, takes the emphasis off the blasting procedure and provides the opportunity to look at many other potential savings and efficiencies within the other processes.”