As IM goes to press on its first monthly issue of 2020, which includes its annual feature on mine maintenance, Giles Bloxwich, Service Manager at Radicon, has warned miners that they need to prepare for gearbox failures with an effective maintenance program.

He issues this warning knowing full well that these components can take anywhere from 3-14 months to build and some operators have lost as much as £1 million/d ($1.32 million/d) as a result of gearbox failure and subsequent downtime.

As with other gearboxes, industrial gearboxes such as those used in mining, see bearings tire, oil seals break down and oil thin as they get older. All of these issues reduce the amount of protection for the gearbox, with wearing and damage accelerating at a startling pace when you get unprotected metal on metal, according to Radicon.

“Mining is one of the harshest of environments and, over time, gearboxes get a hell of a lot of battering,” Bloxwitch (pictured) said. “Underground conveyors, in particular, operate in the most extreme of conditions. An oil change every 12 months or more frequently is definitely needed.”

When Radicon was working with former coal miner, UK Coal, oil samples would be tested every three months, with the company looking at the viscosity of the oil and contamination levels. If the oil was too thin, or contamination was beginning to reach worrying levels, an oil change would be undertaken.

As well as analysing oil regularly, Radicon also recommends undertaking vibration analysis along with scheduled bearing and seal checks. New bearings and seals should, if they are good quality, last for around five years but this can be a lot less in a mine, according to the company.

“Bearing life is the limiting factor of gearbox life,” Bloxwitch said. “If a bearing collapses, gears will drop out of mesh causing shaft breakage and gear tooth damage. This is expensive to rectify and can lead to weeks of downtime.”

Bearings will also be affected by shock loads and jams, according to Bloxwitch, with Radicon recommending replacing bearings before they fail.

“You cannot see inside a bearing, so it’s impossible to know for sure that a bearing is damaged,” Bloxwitch said. “We always tell our customers to be cautious and, if they do have a jam or a shock load, to consider the bearings damaged and to monitor their gearbox closely.”

One method of monitoring is recording and analysing vibration, as this will identify issues with gear mesh or bearing wear. Radicon believes that vibration testing should be carried out every three months, if not more often. 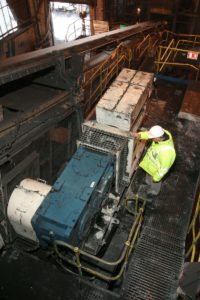 As well as vibrations and the level of metal content in the oil, noise and heat are two other indicators that a service is needed, Radicon said. “If a gearbox becomes louder and hotter during operation, then it could well be time to undertake routine maintenance as the viscosity of the oil could have reduced to such a level that bearing wear is occurring,” the company explained.

Some bearings now feature a temperature probe and an accelerometer, which allows vibration and heat levels to be recorded. “It’s not commonplace but is worthwhile,” Bloxwitch said. “Adding this functionality to the gearbox means operators will be alerted as soon as something changes and that can save them thousands of pounds, if not tens or hundreds of thousands!”

As well as regular oil changes, vibration analysis and following a maintenance program that replaces consumables regularly, including bearings, breathers and seals, keeping the gearbox as clean as possible is another way of prolonging the unit’s life.