A like-for-like Sandvik Bolting Head (SBH) upgrade at the New Afton mine, in British Columbia, Canada, is delivering a significant productivity boost at the New Gold-owned operation, according to Sandvik Mining and Rock Solutions.

Launched over a decade ago, New Afton’s now ageing Sandvik DS300 drill rigs are being given a new lease of life, thanks to an upgrade that sees a current generation bolting head fitted in a like-for-like replacement. Not only is maintenance more straightforward and spare parts easier to source, the new bolting head is delivering a remarkable productivity increase – of 25% – Sandvik claims. In fact, so successful has the mine’s 2021 upgrade been that New Gold has recently confirmed a second of its Sandvik DS300 drill rigs will be given the treatment.

Bolting rigs are used to stabilise hanging and side walls in underground mine applications.

“The upgraded SBH bolting head fitted to the Sandvik DS300s is the business end of the drill and features the latest RD300 series rock drill,” Francois Nell, Sandvik Mining and Rock Solutions’ Head of Rebuilds and Upgrades, says. “This makes it perfect for rock reinforcement in underground mines with small-and-medium cross sections. Different bolt type and length configurations are available, providing an extensive bolt selection, while a full bolt carousel ensures the DS300 is capable of installing up to 15 bolts, ranging from 1.6-3 m in length. Bolt types include cement grouted, resin grouted, anchor point and friction bolts.” 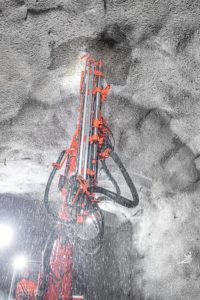 There are several benefits of adding new technology to ageing drills, according to Nell.

“The new SBH is already proven in the field and gives an instant performance boost, thanks to the RD314’s much improved penetration rates,” he explained. “Added to that is the convenience of being able to source readily available current parts more easily, as well as increasing mine’s parts commonality across more drills.

“Also, the new SBH doesn’t put the rest of the D300 under additional strain; in fact, due to the lighter RD314 drifter compared to the drill it replaces, machine strain is, if anything, reduced.”

The SBH upgrade itself is straightforward, coming in kit form, and can be conducted by a mine’s in-house technical teams using the instruction manual the SBH comes with, according to Sandvik. Taking at most a couple of shifts to complete, customer feedback regarding the installation process has been universally positive, the OEM says.

With several hundreds of Sandvik’s Lyon, France-built D300s still working around the world, Sandvik says it expects that this SBH upgrade will be as popular with other mines as it is at New Afton.