Technology looks like playing a pivotal role in Norilsk Nickel’s ambitious growth plan to boost its mined ore volumes at the renowned Taimyr operation, in Russia.

After revealing a target to up production to 30 Mt/y by 2030, from 17 Mt/y in 2017, at its Capital Markets Day in London this week, IM spoke with First Vice-President and Chief Operating Officer, Sergey Dyachenko, to find out how technology was helping the company achieve this target.

Dyachenko listed off several impressive feats the company has achieved in the past 18-24 months that would pave the way for this growth.

First off, Norilsk has digitised nearly all of its operations as part of its Technological Breakthrough program – aimed at designing, planning and operational controls of its mining activities.

It has shifted its mine planning from a shift-based system to an hourly scheduling program, is carrying out dynamic simulations of mining activities on an as-needed basis to visualise the effects of mine plan changes, has installed proximity detection and collision avoidance systems (with a 50 m personnel detection range) at all of its underground mines, and has commissioned a real-time dispatch system to optimise its operations.

With digital centres built or being built in all of its major mining hubs, and Wi-Fi rolled out across its underground operations, all of its processes are now very much ‘connected’.

Dyachenko said these initiatives were already paying off, with a 7% increase in nickel-equivalent production between 2017 and 2019, partly attributable to the digitisation and automation programs. He could also point to a productivity increase – the output of nickel equivalent per employee rising 15% over this same timeframe.

While the company has come a long way since it started its Technology Breakthrough program in 2014, it is ready to leverage more technology over the next five years (and beyond).

Dyachenko spoke of transitioning from dynamic 3D mine models to the use of digital twins for mine plan optimisation at all of its mines and, excitingly, plans for a “fully autonomous smart digital mine” at its Skalisty nickel-copper-PGM underground project at the Polar Division, Norilsk’s key production asset on the Taimyr Peninsula.

Skalisty, at more than 2,000 m below ground, will be the company – and one of Russia’s – deepest underground mines. This fact is making Norilsk reconsider its normal mine development and operation route.

The company is currently engaged on a prefeasibility study at Skalisty, however it has already carried out 966 m of shaft sinking to bring the #10 ventilation shaft down to 2,056 m, and plans to start horizontal development at the project next month. Completion of the main shaft is scheduled for 2021.

“We have a task to make our Skalisty underground mine an autonomous mine,” Dyachenko said, explaining that the depth and accompanying temperature that comes with it made it a difficult environment to operate in.

Added to this, Dyachenko said the “demographics” of the future workforce and the need to provide an “interesting environment” at Skalisty made it a necessity to at least relocate machine operators to a control room on surface.

Norilsk will not be working on this ‘task’ alone. In addition to using consultants for the prefeasibility study, it is has also engaged an OEM with experience of automating underground operations in Mali and Sudbury (Canada) at this stage.

“We want to have a very clear concept…and find out the economic impact and best configuration for the mine,” Dyachenko explained.

The Norilsk COO said engaging such an OEM at this point in the mine development process also provided the manufacturer with the required time to “customise” a solution that fitted the Skalisty orebody and infrastructure.

“Not all of this will be off-the-shelf,” he commented on the equipment and infrastructure required for Skalisty, adding that battery-electric vehicles could also come into the mining equation.

Speaking of time, Dyachenko said the company expected to recover the first ore from development at the deep mine in 2023, followed by first “production” ore in 2024.

The new Skalisty mine is expected to eventually ramp up to production of ~2.5 Mt/y.

Russia-based Norilsk Nickel is actively implementing its Technology Breakthrough programme and is seeing significant returns when it comes to exploration and operations knowledge, Sergey Dyachenko told IM earlier this week ahead of the company’s Capital Markets Day in London.

While the programme, which started in 2014, aimed to digitise and automate most processes at the company’s extensive mining and processing facilities by 2020, Norilsk’s Chief Operating Officer said increasing the company’s exploration knowledge was a fundamental aim.

“We spent a substantial amount of money, time and expertise to get the best understanding of what our mineable reserve is,” he said. The company has now taken this fully-digitised dataset and put it into a 3D environment, where geologists, mine planners and engineers can analyse and interpret where the company may look to explore, drill, develop or mine next.

This is having a knock-on effect across the group, according to Dyachenko.

“The further we move with resource knowledge, the more precise figures will go into our strategic plan,” he said.

He talked about the company moving from longer-term planning scenarios to hourly planning with the help of an underground automated dispatch system and simulation models that could be run as regularly as every month.

After successful trials at one of the company’s mines, simulation models have been developed for every operation and are now in use for regular mine planning in order to confirm operating drivers, he said, adding that the vendor could launch this programme commercially in the next few years.

These investments have been bolstered by a new data centre platform and enterprise data network, and the installation of 956 km of high-speed fibre cable to its main Norilsk hub in Russia. 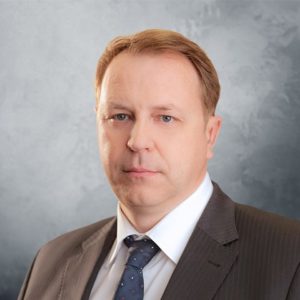 Norilsk is a city in Krasnoyarsk Krai, located above the Arctic Circle, where the company has been mining nickel, copper, cobalt and platinum group metals for several decades. The mineral-rich region has played a big role in the company becoming and retaining its position as the largest high-grade nickel and palladium producer in the world.

These technology developments should allow the company to improve transparency at its underground mines and speed up operational changes and maintenance, according to Dyachenko (pictured, left).

“By mid-next year, we will have all of our processes – not just loading and hauling – in a real-time environment,” he said.

Moving maintenance procedures into real-time and predictive mode, plus transitioning from a paper-based to electronic metal accounting system were two of the other aims of the Technology Breakthrough programme, he added.

The company is to continue spending on what it calls “advanced digital technology”, with some $80 million set aside for 2018 to 2021.
From January 1, SAP’s enterprise resource planning software will have been rolled out across all production sites for improved productivity, and sensor equipment (such as bucket teeth monitoring on excavators) will also be installed at key operations.

Pilot projects in computer vision, robotics and data mining will also progress, while exploration projects using drones and other airborne surveillance tools are being weighed up.

“In all of our operations, we look at the opportunities to use artificial intelligence and big data, end-user analysis and preventative maintenance,” Dyachenko said, adding that the drivers for these were around safety, productivity, operational performance and cost efficiencies.

And, as is becoming commonplace across the mining space, Norilsk is looking into bringing greater means of automation into future underground operations.

“Currently, we have a vision to introduce a fully-automated mine,” he said.

The first candidate for such a shift is likely to be the Skalisty nickel-copper-PGM underground project (pictured) at the company’s Polar Division, Norilsk’s key production asset located on the Taimyr Peninsula.

The project is currently commissioned at an operating capacity of 700,000 t/y and is expected to be ramped up by an additional 1 Mt/y by 2021. The overall target capacity is 2.4 Mt/y and the total capital expenditure (2013-2020) will amount to $2 billion.

Dyachenko said the company was in the process of finishing the shaft sinking and lateral development work and, after completion, would start to look at how to utilise new technologies to automate operations.

The development of Skalisty, the deepest mine in Eurasia at more than 2,000 m depth, according to Norilsk, could also see the company introduce battery-electric equipment, according to Dyachenko.

While the company has not yet identified a specific piece of battery-powered equipment for the task, Dyachenko said the company was already analysing how it could accommodate such loading and hauling machinery into operations.

“Those technologies don’t provide a continuous operation for extensive periods of time and we will have to take this into account,” he said, explaining that the mine plan will need to incorporate battery re-charging or change-out approximately every five hours.