The gold mine, in Mali, mined 737,338 t of ore over the period, as the company, in its financial year, moved from development to production in the sub-level cave.

At full capacity the underground mine is expected to produce around 46,000 t/week of ore, or 2.4 Mt/y, using a fully integrated automated mine fleet that is being facilitated through a partnership with Sandvik. Once the underground mine is fully commissioned, Syama will be capable of producing over 300,000 oz/y of gold, according to Resolute.

In the financial results, the company said the automation switch was gradually being turned on, with operators in the newly completed surface control room (pictured) now able to control underground production units over shift-change, blasting and re-entry periods, when there are no personnel in the underground mine.

Resolute said: “This represents the initial delivery of one of the main benefits of automation, the ability to maintain production over periods when operations would normally cease in a typical manual mine.”

The company noted that the fibre optic backbone and mine-wide wireless network was now complete from the portal down to the 1055 haulage level and was connected to the surface control room.

“This network enables the operation of the automated haulage loop, automated rehandle level, mine digitisation and production automation, all of which allow operators to monitor and control mine production in real time,” the company explained.

A major technical characteristic of what Resolute is referring to as “the world’s first fully automated haulage loop” is the ability for Syama’s haul trucks to rapidly transition from laser-based underground navigation to surface-based differential global positioning system (GPS) navigation.

The company said recent trials at Syama demonstrated Resolute’s haul trucks can acquire the feed from the two surface GPS base stations and seamlessly lock onto satellite guidance to complete the transition to GPS navigation without any delay or speed reductions.

The next phase of the company’s automation work will see the commissioning of the 1055 haulage level with automated rehandle loaders and haulage trucks working together to load from an ore pass and truck directly to the surface run of mine pad, Resolute said.

“With the fans, pump stations, control room and communications network complete, the automation project is being progressively handed over to the operations team which is now at normal operational manning levels,” the company concluded.

The extraction of first ore from the southern end of the 1105 level of the Syama sublevel cave marks the anticipated beginning of the main caving operation at Syama and the achievement of a major milestone for the company, Resolute said.

Resolute’s Managing Director and CEO, John Welborn, said: “Syama will be the world’s first, purpose built, fully automated sublevel cave gold mine. It is a world-class, long life, low cost asset that will deliver long term benefits to our shareholders, stakeholders, and local Mali communities for years to come.”

Resolute has partnered with Sandvik to deliver the automation solution at Syama, with the OEM also supplying the underground fleet, which includes automated Sandvik TH663 trucks and LH621, LH517 and LH514E LHDs.

Welborn went on to say Syama would be the most sophisticated and advanced gold mine in Africa.

“Our investment in exploration, infrastructure, technology, power, and innovation at Syama has transformed a world-class orebody into a world-class mine,” he said.

Resolute has an ambition to be a leader in sustainable and responsible economic growth in Africa, according to Welborn. The company recently announced plans to build a new 40 MW Syama Solar Hybrid Power Plant which will deliver an expected 40% savings on power costs and is expected to be the world’s largest mine-based, off-grid fully integrated independent solar hybrid power plant.

In addition to this, the company is working on Project 85, a series of sulphide processing plant upgrades, that will enable the company to achieve improved recoveries from high-grade ore sourced from the new sublevel cave, he said.

“The combination of mine automation, improved recoveries, and lower cost power has the potential to increase Syama site production to 300,000 oz/y of gold and reduce life-of-mine all-in sustaining costs to below $750/oz,” he added.

The initial development of the sublevel cave infrastructure including the twin declines and access to the first four sublevel levels of the cave, the 1130, 1105,1080 and 1055 sub levels, has been established. Approximately 400,000 t of development and long hole stoping ore have been extracted from the underground mine to date. Mining rates will gradually build up over the first half of 2019 and are expected to reach nameplate capacity of 200,000 t/mth by the end of June 2019.

Australia-based Resolute Mining has more than just autonomy on its mind at the in-development Syama Underground gold mine in Mali. The company is also weighing up full electrification of its mining and development fleet.

Resolute has partnered with Sandvik to deliver the automation solution at Syama, with the OEM also supplying the underground fleet, which includes automated Sandvik TH663 trucks and LH621, LH517 and LH514E LHDs

Sub-level caving is expected to commence at the planned 2.4 Mt/y operation in December 2018, Resolute Chief Operating Officer Peter Beilby told IM. “We will then ramp up to full automation and run-rate production by June 2019,” he added.

Resolute has previously said one of the reasons for its choice of equipment at Syama Underground was “anticipating the logical next step in the evolution of underground machinery to battery-powered operation”.

When IM asked Beilby about this, he responded: “We strongly believe that, as well as going automated, mining is going electric.”

While the initial fleet will have some diesel loaders for development headings and diesel-powered trucks, plus drilling equipment with small diesel motors, Resolute is already scheduled to have a tethered version of the Sandvik LH414E, and, Beilby revealed, a DD422iE, Sandvik’s battery-powered electric mining jumbo. 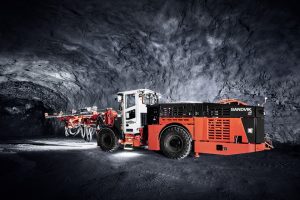 This battery-powered jumbo, designed to drive down production costs while reducing the environmental impacts of drilling and tunnelling, is also in use at Goldcorp’s Borden development project in Ontario, Canada.

And, it appears this is just the start of Resolute’s electrification plans at the project.

“We certainly want to pursue further electrification,” Beilby said, adding: “I have no doubt that in, say, five years’ time, we will be a lot further down the track with electric mining.”

IM was speaking to Peter Beilby as part of a longer interview for the Big Data and digitalisation feature to be published in the upcoming IM November issue.