When Eldorado Gold acquired the Lamaque project, near Val-d’Or, Quebec, from Integra Resources back in 2017, many observers would have assumed the larger company would just follow the blueprint set out by the junior miner.

That plan – outlined in a February 2017 preliminary economic assessment (PEA) – envisaged the building of a high-grade underground operation able to produce an average of 123,000 oz/y of gold at all-in sustaining costs (AISC) of $634/oz over 10 years. Underground mining would be carried out by long hole and room-and-pillar mining methods, with the former representing 90% of the tonnage and room-and-pillar 10%.

With some existing infrastructure already in place from the historic Lamaque mine (now mined out) and gold prices close to double that of the estimated AISC at the time of acquisition, Eldorado stood to make a healthy profit by following this route.

The company had bigger ambitions for the mine.

In 2019, Eldorado declared commercial production at Lamaque just over 18 months after the acquisition. The company recently put out five-year guidance for the mine showing production increasing to 150,000 oz/y, which would be facilitated by an increase in underground development.

Further plans include technical work to find the optimal production rate for the Triangle deposit – the underground deposit that feeds the Sigma mill. Together, these two assets form the new Lamaque mine.

In late March, at the same time as declaring a suspension of operations at Lamaque in line with provincial regulations related to curtailing the spread of the COVID-19 virus, the company announced it had been granted approval to expand mine throughput to 2,650 t/d, from 1,800 t/d.

As these targets have been hit, the company has looked to apply new technology and techniques to the Lamaque orebody to improve performance.

Late last year, then-COO, Paul Skayman, told IM the company was considering the use of battery-electric vehicles, or vertical haulage with conveyors, as part of its mine expansion plans.

This year, the company has followed that up by agreeing to trial a revolutionary mining technique that could allow it to further enhance Lamaque’s economics, improve safety and develop technical expertise that could potentially be leveraged at some of Eldorado’s other mines.

Suddenly, Lamaque is being thought of not just as a profitable run-of-the-mill gold mine, but a place where industry-wide technical and technological advancements can be made.

SAMS™, or the shallow angle mining system, has been in existence since 2012 when Quebec-based Minrail consolidated several patents associated with previous iterations of a mechanised mining technique developed for narrow, shallow dipping deposits oriented at 10-45°.

The rail-based system starts with the excavation of a niche and draise (a drift/raise hybrid) through conventional methods. After this, workers install double overhead rail that tracks the angle of mineralisation throughout the excavated area. 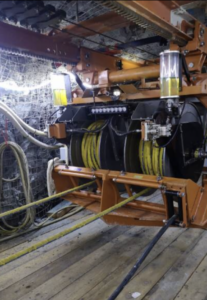 Various units to carry out mechanised mining of the mineralisation – a hydraulic drill for development, longhole drill for production, rock breaker, a scraper/excavator, power unit, air/water spool, etc – hang off this rail, which is securely bolted in place. A work platform where operators can carry out drilling, explosives loading and mucking from a safe distance under supported ground is also attached to the overhead rail.

The typical mining cycle sees the orebody drilled, explosives placed, and blasted material transported to the ore access drift using the excavator module in combination with a slusher. From here, loading and hauling takes place.

According to Minrail, the system offers the potential to significantly reduce dilution, operating costs and mine capital development costs. Marc R Beauvais, President and CEO of Minrail, explains: “What makes SAMS stand out so much is it allows companies to significantly reduce the need to excavate tightly spaced access drifts. Other mining methods require reduced vertical separation between each level, thus increasing the number of levels within the mine infrastructure.”

Using wider spaced levels reduces the amount of time required to extract the ore from within the orebody as less time is spent excavating waste rock material, according to Beauvais.

“In certain cases, we have seen up to a 40% reduction in lateral development, translating into millions of dollars in savings,” he told IM. This also translates to the ability to access ore zones much quicker than conventional methods.

“On top of that, the mining method, in itself, is highly selective, therefore, reducing again the rockwork required to extract the ore. What people need to understand is in a SAMS mine layout, SAMS aims at the ‘ounces contained’ within the orebody, not the raw tonnage,” Beauvais said.

It is these traits, on top of the significant safety benefits of applying the system, that attracted Eldorado Gold’s Lamaque team to the technology, according to COO and Executive VP, Joe Dick.

“We may not have mined these narrow, shallow-dipping veins conventionally, at least directly, without such technology,” he told IM.

Dick says he is excited about what the technology could provide both the company and the Lamaque asset.

“It brings a way to advance the mining economics by extracting resources that the current mining method (long hole mining) is not suited to.

“Testing will also potentially give us an idea of if the technology will be suitable in other jurisdictions with similar orebodies – from a geometric and orientation perspective.

“We will also be able to build some technical expertise around the technology, which is always good to have.”

By far the biggest benefit SAMS could bring the Lamaque team is improved safety, according to Dick.

“One of the things SAMS would allow us to do is advance areas under supported ground that, in the past, we had to either mine around or ‘bar loose’ as we were advancing. First and foremost, this is the main appeal.”

Sylvain Lehoux, General Manager at Lamaque, adds to this: “It’s also worth pointing out that we will be able to drive this machine remotely.”

Lehoux said the company has already started carrying out remote mucking with LHDs between shifts that has been facilitated through SAMS testing.

Beauvais said: “In its third generation, SAMS equipment is designed to undertake most of the rockwork activities without the presence of an operator in the ‘hot zone’. Live video capture from the four onboard cameras can be transmitted to the surface along with all the data collected (mechanical, electrical, hydraulics, etc) from the various onboard probes and sensors.

“Three-dimensional, high-density scanning of the ‘in progress’ rockwork is also available,” he said.

Eldorado and Lamaque are coming to the SAMS technology in the third generation Beauvais speaks of. In the eight years since Minrail was founded, SAMS has evolved.

The first-generation SAMS machine originated from the work of a mining company consortium in 2003. Beauvais eventually brought the patents into the Minrail fold when it was founded in 2012. 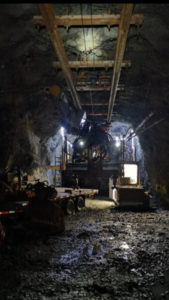 The aim of this original iteration was the same – to mine shallow dipping deposits – but the components to carry this out hung off a monorail that proved too inflexible to be practical, according to Beauvais. The second-generation machine, which got an outing at the Beaufor mine in Quebec, was the first to include the double overhead rail design, an innovation that improved flexibility and enabled Minrail to mine a 1,000 t sample at the operation prior to owner Monarques Gold placing the operation on care and maintenance.

The adaptations to this second-generation machine – designed to enable remote operations of all tasks – have provided Eldorado with the confidence to test out the latest generation at Lamaque.

Further down the line, Ascot Resources has included the technology in the “value enhancement opportunities” of its Premier and Red Mountain gold project feasibility study. This could see the technology branch out of Quebec into British Columbia.

Such a response is hardly surprising considering it is the type of 100% electrically powered, zero emission underground mining method operators have been calling out for.

Add to this the prospect of adding an autonomous, remotely controlled ore transportation system to the SAMS mix – Minrail’s Suspended Muck Handling System, or SMHS, which Beauvais says will be tested in prototype form later this year – and the future prospects are great.

But, for the time being, the industry will keep watching how the technology is being applied at Lamaque.

Lehoux, who says there are several veins at Lamaque that fit the 10-45° niche Minrail has set out to mine mechanically, says Eldorado, the Quebec Government (which granted Minrail C$150,000 ($106,718) to help develop a third-generation prototype SAMS machine) and Minrail are working together to create a machine that can be showcased globally.

“This is the first time I have seen mechanisation of these shallow veins – it was always jackleg and conventional stopers,” he said. “The government stepped in and provided funding because it is a new machine, developed in Abitibi, that is of global significance.”

Lehoux and Dick say Eldorado is fully committed to making a success of the technology and has put experienced miners on the system to enable the machine to be finetuned as the project progresses.

The initial feedback from Lehoux and his team is positive.

“We have run the latest version of the machine on site, drilling a couple of rounds and mucking out from there,” he said. “As you know, we restarted last week (April 15) after the restrictions from the government were lifted. So far, it is going really well with the Lamaque team and Minrail team on site.”

There is also talk internally at Eldorado about how SAMS could fare at its underground mines in Greece.

With at least one or two shallow dipping veins at Lamaque set aside for testing out SAMS, Dick and Lehoux are hopeful that, by the end of the summer, the company will be in the position to evaluate the technology’s commercial potential.

“There is drilling and mucking ahead, but we also want to test the ground control,” Lehoux said. “We might have to modify the machine to accelerate the cycle, and we also need to evaluate how long it takes to dismantle and setup a machine to go from one vein to the next.”

Beauvais, while acknowledging the dedication and collaborative nature of the team at Lamaque, thinks the machine will pass all the tests set for it: “The bottom line is: SAMS allows you to not only save money as you mine out the resource, but it also enables you to reduce your overall mine footprint.

“It requires less rockwork, comes with a significant reduction in ventilation and heating requirements, provides quicker access to revenues, offers a far safer and ‘cleaner’ working environment with zero emissions, and is automation-ready technology.

Lehoux says if the technology works, Lamaque could be used as an example for the whole mining world, “where other sites will come down underground to see the cycle and evaluate how it works”.

Lamaque will then become more than just a mine. It will become a global testbed for a new revolutionary technology.

Eldorado Gold says it has achieved commercial production at its wholly-owned Lamaque mine in Quebec, Canada.

Lamaque produces ore from the Triangle deposit, which is then processed at the refurbished Sigma mill.

In 2018, inferred resources at Lamaque were increased by over 50%, and further drilling is currently ongoing to increase both the reserves and resources, Eldorado said. With over 37,000 m of exploration drilling budgeted for 2019 and excess capacity at the Sigma mill, the company said it is well positioned and focused on optimising the potential of the Lamaque mine.

Eldorado’s Chief Operating Officer, Paul Skayman, said: “We are proud to announce the achievement of this important milestone just over 18 months after acquiring this asset. It is a testament to all of the hard work that has gone into the exploration, prefeasibility study, engineering and construction that we have safely delivered commercial production ahead of schedule.”

Lamaque consists of the newly-discovered Triangle gold deposit, only 2.5km south of the historical Lamaque and Sigma mines, which are also on the property and produced over 10 Moz of gold.