Metso’s Tampere, Finland, facility is due to deliver some 1,000 crushing and screening units this year as the company makes full use of the €1 million ($1.15 million) Speedline assembly line it started up in January.

The investment, targeting both efficiency and safety improvements, has enabled Metso Tampere to produce more of its famous Lokotrack® mobile track-mounted crushing units, while also speeding up production of C-series jaw crushers and GP-series cone crushers. 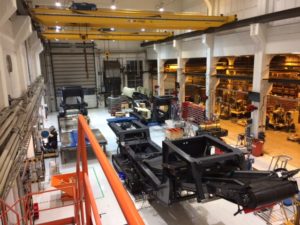 The majority of these products will find their way into the aggregates industry, but the largest equipment will be seen in mining operations around the world – for example, the Lokotrack LT200 in use at the Altay Polimetally LLP copper mine in Kazakhstan.

IM Editor Dan Gleeson toured the centre last week and found out about the company’s extensive crushing database and how its rock laboratory is offering customers a preview of how its machines could perform.

Metso’s crushing R&D facility in Tampere is receiving rock samples from all over the world on a weekly and, sometimes, daily basis.

As IM approached the 10-year old rock laboratory in Tampere, piles of rock were waiting outside for testing in a full-scale, enclosed crushing facility configurable with a jaw crusher and either a cone, gyratory, or impact crusher. Various screens were also able to be installed.

Powered by a 300 kW motor and housed inside a roofed facility, this crushing circuit provides customers looking to buy a Metso crusher with the sort of information they only normally receive after the new plant is delivered and commissioned at site.

But, for those not wanting to transport a few tonnes of material to the Tampere facility, Metso has devised a much smaller rock test that only requires a 4 kg sample and tests the hardness, crushability and abrasiveness of the rock in question.

Inside the test centre, manager Ville Viberg talked IM through this much smaller process, explaining the rock test also indicates how quickly a crusher’s wear parts may reach the point of failure – a boon for customers already planning their maintenance shifts years in advance.

Viberg said the company had carried out some 17,000 rock tests to date across the globe, plus some 5,000 crushing tests on the much bigger scale.

This has provided the company with a massive database to refer back to, which it often does in the cyclical mining industry.

On top of this, the company’s Bruno simulation software, mainly used for aggregates applications, offers another level of expertise, allowing users to enter basic feed material and machinery data into the process with the software predicting how the process will perform. Today, there are more than 7,000 users of Bruno, which was developed by Metso all the way back in 1994.

In the future, Metso’s R&D for mining is clear on the direction it is taking – finding solutions to increase energy efficiency and prolong machine life.

This has already seen the company launch its Superior™ MKIII; a gyratory crusher offering 30% higher capacity than other high-speed crushers and 70% lower downtime with a rotable top shell design. The third-generation machine also comes with a five-year warranty for all main components.

The MKIII gyratory crusher was developed in Metso’s mining competence centres with the development headed by the Waukesha centre, in the US, which focuses on mining crushers.

From IM’s visit, it was clear that the more than 100-year old factory in Tampere, which is one of several Metso minerals R&D centres around the world, has plenty of new innovations up its sleeve.

Like the rest of the Metso group, the addition of a digitalised platform like Metso Metrics for Mining – due to be launched next month – will enable the factory to keep developing products to solve the industry’s needs.