The combination of software from Hexagon and hardware from RealWear allows workers in industries such as metals and mining to increase efficiency of operations while minimising potential safety issues, they say.

Using the ‘Maintenance Execution 2.0’ package, workers can leverage hands-free technology, end-to-end, throughout their work processes, the companies say. All necessary data can be provided to the worker at the required time and place, while communication and collaboration between operations and maintenance is increased.

“These digital workflows are designed to optimize a technician’s ‘time on tool’, ultimately improving important metrics like mean time to repair, first time fix rates and overall reliability,” Hexagon PPM and RealWear say. “Efficiency and safety can be optimised by real-time notifications of hazards and ‘near-miss’ reporting. This increased visibility into plant conditions drives preventative action and improves traceability for auditing and investigating purposes.”

Sanjay Jhawar, RealWear President and Co-Founder, said: “Our partnership with Hexagon and the integration with Xalt harnesses the power of RealWear’s 100% hands-free platform and our industrial head-mounted, assisted reality headsets, enabling customers to rapidly deploy and quickly scale tailored connected worker solutions that simultaneously enhance both productivity and safety.”

These sectors are facing increasing pressure to maintain vital infrastructure and equipment while safeguarding workers, all in the most cost-effective way possible, the company says. With global travel restrictions and sustainability challenges now impacting many organisations, pressure is also mounting to allow personnel in remote locations to be connected live back to base, the office or home to enable simultaneous review and decision making worldwide.

“The alliance will bring greater functionality to Harvest’s ‘data-anywhere’ solutions, which can transmit high-quality synchronised video and audio across an extremely low bandwidth,” Inmarsat says. “Harvest’s popular Wearwolf™ wearable headset solution enables remote workers to communicate directly with technicians, engineers and site managers who may be located across different continents simultaneously in real time, from the comfort of their offices or homes, so removing the need to travel.”

“Our global connectivity services are underpinned by the world’s most reliable satellite communications network, which is the backbone for maritime, aviation and land safety services throughout the world,” Inmarsat says. “This ensures that any type of survey, inspection or maintenance procedure can be experienced through the eyes and ears of the crews on the ground and directed by technicians and engineers as if they were on site, from anywhere in the world.”

Steven Tompkins, Director of Sector Development at Inmarsat, said: “The energy, utilities and mining sectors have all harnessed the benefits of global satellite communications to maintain safe and efficient operations for a number of years. However, these challenges have been exacerbated by global restrictions imposed as a result of the coronavirus pandemic, which means that there has never been a greater need for affordable solutions that help organisations collaborate, work together and improve operations, no matter where they are located.

“By developing a wearable solution that supports our High Data Rate streaming capabilities across a low-bandwidth connection, Harvest is facilitating highly efficient, safe, cost-effective and sustainable site surveys of pipelines and valuable assets across industrial sites in remote areas around the world. We are excited about the huge potential of this agreement and how it will change the way industrial professionals communicate and collaborate, no matter where they are located.”

Gregory Darling, Managing Director of AST, added: “AST is delighted to partner with Harvest and Inmarsat to provide real-time video and audio solutions cost effectively through our secure global INTEGRA network from anywhere in the world. The alliance supports our vision to continuously empower our customers with dependable solutions that improve their operational efficiency, reduce their health and safety risk and minimise their carbon footprint.”

Harvest’s Managing Director, Paul Guilfoyle, said the alliance will not only allow for the implementation of existing technology, but will further “fuel the innovation for future cutting-edge communication initiatives”.

Boliden has, for the past few years, been testing out 4G and 5G networks at its mines in the Nordic region and recently went live with 4G (LTE) network services at its Aitik open-pit copper mine in Sweden, Fredrik Kauma, Project Manager, told attendees at the recent Mines and Technology conference in London.

The company, one of the mining sector’s leaders when it comes to employing innovative technology, installed its first underground Wi-Fi network in 2013 and has since come a long way on this connectivity journey.

Today, all of Boliden’s mines have complete Wi-Fi coverage, with the network consisting of some 3,000 installed access points and additional hardware, Kauma said. The company uses this for voice communication and positioning, but also other services such as remote control, machine-to-machine interactions and general data or information access.

In 2016, the company installed a small 4G network in one of its underground mines. Now, multiple upgrades later, the network includes the latest 4G features, in addition to elements considered “borderline” 5G, Kauma said. He credited a close co-operation with Ericsson and its research organisation for this installation as well as the Swedish mobile network operator Telia.

The 4G/5G network covers about 1.8 km of tunnels plus 10,000 m² of other areas (production/workshop/offices/canteen) with relatively few pieces of radio equipment, according to Kauma.

Coverage of a similar area with Wi-Fi would require about three times as many access points, he pointed out.

A direct outcome of this test network has been the recently addition of 4G network services at Aitik, one of Europe’s largest and most efficient open-pit copper mines.

This will allow the company to, primarily, carry out accurate remote control of its fleet of Epiroc Pit Viper blasthole drill rigs.

“But, long-term we believe it will replace our existing production Wi-Fi network,” Kauma said.

The future in 5G

While Wi-Fi does offer Boliden much in terms of connectivity, it cannot match 4G/5G when it comes to robustness and coverage. This is part of the reason the company is pursuing developments with 5G technology.

Equipment tracking is one area that could potentially be improved with 5G, Kauma said. 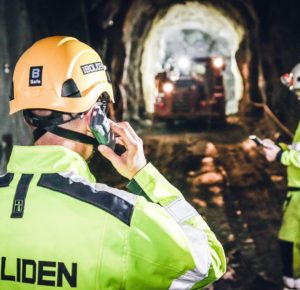 Today Boliden currently uses “passive” Wi-Fi tags for this task, with active antennas mounted on mining vehicles. The signal reflection is only picked up if the tags face the direction of the active antenna and the vehicle with antenna passes close by. While this system adds a lot of value, it does not currently offer the reliability Boliden would like to see, he said.

With 5G, Boliden expects to have “active”, as opposed to passive, tags, which transmit information on a pre-determined basis.

What Kauma termed “advanced remote control” operation is another area set to benefit from 5G connectivity.

The company already has remote control operations today, but it is either line-of-sight or a pre-determined, repetitive type of remote operation; not advanced.

In advanced remote operations, the performance of the wireless communications network has a direct impact on how well the operator can handle the machine, with control responsiveness and picture quality the main factors here.

According to Kauma, low latency will greatly improve the real-time aspects required for secure and efficient handling of vehicles, machinery and other equipment such as drills, hammers, shovels, etc.

In addition, the Quality of Service concept, where priority of connection is given to certain customers, will guarantee bandwidth needs for a detailed enough video stream to the remote operator – even on a heavily loaded network, he said.

The improved connectivity expected to come with employing 5G will also be beneficial for wearable technologies, which Boliden has been trialling to help improve the safety and well-being of employees.

The company recently tested out use of a prototype “smart vest” at one of its underground mines for, primarily, proximity detection, but also to “gain a better understanding of other possibilities that comes with this technology”, Kauma said.

In addition to the standard proximity detection functions, lights or reflectors warn the wearer as well as surrounding personnel of potential dangers through different flashing/blinking patterns.

Boliden would like to, in the near-future, use wearable technology for the monitoring of employees in physically-demanding environments; for analysis of the immediate environment surrounding employees (extreme temperatures, dangerous air quality, strong vibrations or sounds); and for positioning and situational awareness (ie warnings for approaching vehicles).

Key ingredients to make this a reality include a reduction in power consumption – low power means smaller and longer lasting batteries – a fall in cost, enabling the company to equip its entire workforce, and better network coverage and reliability – hence the use of 5G.

“If 5G delivers on its promise, it will be a critical component enabling wearable technology in an industrial environment like ours,” Kauma concluded.