Orica says it will unveil its latest through-the-earth, fully wireless initiating system, WebGen™ 200 at MINExpo 2021 in Las Vegas next week.

A development based on more than 2,300 successful WebGen 100 blasts around the world, specifically in underground mines, Orica’s WebGen 200 technology has been designed with customers’ needs and feedback built-in as they look to further improve safety and productivity across their operations, the company says.

WebGen technology provides for groups of in-hole primers to be wirelessly initiated by a firing command that communicates through hundreds of metres of rock, water and air. This completely removes constraints often imposed by the requirement of a physical connection to each primer in a blast and importantly allows the removal of people from harm’s way, it says.

“Engineered to deliver market-leading safety and reliability, WebGen 200 has been built with enhanced capabilities, security and versatility, ensuring it meets the extreme mining conditions faced by surface and underground customers pushing the boundaries of mining’s next frontier,” Orica says.

MINExpo 2021 will take place on September 13-15 at the Las Vegas Convention Center.

Orica Chief Technology Officer, Angus Melbourne said: “We know that as our customers go deeper and move into more complex mining, they are requiring more advanced technology to help them mine differently and continue to extract their orebodies safely and efficiently. That’s where WebGen 200 and our broader technology roadmap comes in.”

WebGen 200 harnesses digital technology to allow advanced features including digital inventory management, delay adjustments before blasting, an improved user interface and increased quality assurance, according to the company. Reliability is further improved with the WebGen 200 primers available to endure even greater dynamic pressure.

“We developed WebGen primarily to reduce or remove employees’ exposure to hazardous environments and improve overall operational safety. But we are also seeing the technology delivering unparalleled improvements in productivity and improved recovery for our customers – it is enabling a step-change in blasting and mining like no other.

“We are excited about what the future holds for the industry with WebGen 200 and know the enhancements made to this second-generation product will improve the customer experience, broaden its application and deliver significant value for customers while enabling the first stages of blast automation.”

The hardware, software and the WebGen 200 units come together as a system that, Orica says, is easily integrated into any operation. It will be available in four product variants and include a wider range of booster weights, opening up new segments, applications and opportunities in both surface and underground mining.

Orica and Epiroc have been developed Avatel, billed as a first-of-its-kind, industry-driven semi-automated explosives delivery system, with a prototype machine currently undergoing trials ahead of being commercially ready by the end of 2021.

The charging solution, enabled by Orica’s WebGen wireless initiating system technology, addresses the final step in the underground development cycle yet to benefit substantially from mechanisation and automation.

It is expected to bring a step-change in safety by eliminating the need for wired connections and subsequent exposure to crews at the face, according to Orica. Instead, the entire charging cycle can be completed by a single operator from within the safety of an enclosed cabin, several metres from the face.

The WebGen 200 development program is progressing to plan with comprehensive verification and validation product testing completed, according to Orica. Field trials are planned and will be completed across multiple mining segments and regions in Australia, Canada, Latin America and Europe, ahead of being commercially available from December 2021.

Orica says testing of its WebGen™ 100 solution at Barrick Gold’s Hemlo mine in Ontario, Canada, has shown wireless blast initiation can improve the economics of its Alimak stoping.

In early 2019, Hemlo’s management team approached Orica and Manroc to explore opportunities for improvement via the application of wireless blast initiation. Through a series of workshops, Orica and Barrick Hemlo worked together to identify opportunities to use WebGen 100 wireless through the earth initiation technology in its Blind Alimak Mining application.

This Blind Alimak Retreat (BAR) concept was aimed at improving both safety and productivity, and included:

To expand operations and aid in the longevity of mine life, both efficiency and recovery were top priorities for the Hemlo team, Orica said.

Alimak Mining is normally done either in small repetitive blasts cycles, from the bottom of the raise up to an upper sill, or, in the case of blind Alimaks, as a mass blast into the void that exists in the raise and undercut below.

Given that access is lost after the mass blast, the size of the blast (Alimak height) and recovery is often restricted by “free face” and available void. At Hemlo, the Blind Alimak blast performance was limited by underbreak in the top third of the Alimak (footwall break) due to the available void becoming choked off during blast progression. Using wireless blasting technology, the team was able to eliminate all void limitation, Orica said.

The solution was to develop a blast design with optimised burden and spacing as well as timing and blast sequencing, allowing well-defined portions of the Alimak stope to be taken at the appropriate time. Single-pass loading was used to achieve the safety and productivity benefits.

Breaking the Alimak stope into five pre-loaded portions (each increasing in size to capitalise on void created during the excavation process) allowed for flexible blast management throughout the mining process, Orica said.

“With the ability to merge and increase blast sizes based on in-field results, the operation had unprecedented control and was able to operate outside of the traditional constraints of mining cycles,” it added. 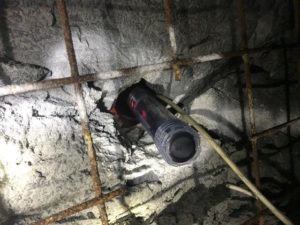 With three days of continuous loading, Hemlo was able to achieve a month-and-a-half worth of blasting while freeing up the Alimak crews to move on to the next stope, according to Orica. To maximise the blasting sequence, the first blast (wall slash and five rings) was blasted with Orica’s i-kon™ III Electronic Blasting System. The next three blasts (two merged) were fired with WebGen 100 units when ready, with performance verified with bucket counts and CMS.

The results of the project stope were extremely positive and proved that wireless blast initiation can improve the economics of the Alimak stoping, according to Orica. Key benefits included significantly reduced personal exposure (reduced by over 50%), increased stope recovery and cycle time. The success of the Alimak has also led to the introduction of wireless blasting into large blind up-hole patterns at Barrick Hemlo, solving similar issues to that of the Alimaks, Orica said.

The outcomes of this project delivered a 40% improvement in productivity through decreased cycle time, faster mucking rates, improved ore recovery from 70% to over 90%, and increased safety by eliminating countless re-entries and hookups, while stripping rail and logistically simplifying the operations process.

“The project has also shown the ability to increase the height of blind Alimak stopes without concern for available void, thereby eliminating the need of top sill development moving forward,” it said.

This successful trial has led to full-time technical collaboration with Barrick Hemlo mine since the end of 2019. Including this evaluation at Hemlo, Orica has successfully fired more than 50 wireless initiating system blasts loaded with over 2,700 WebGen 100 units.