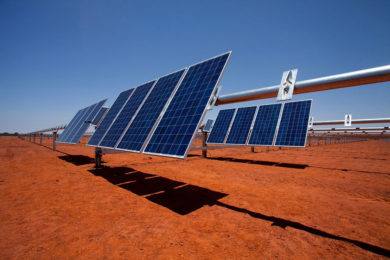 The share of renewables powering the mining industry is set to rise, according to a report from Fitch Solutions, with an increasingly favourable regulatory environment, fast-falling costs and environmental considerations moving the industry away from fossil fuels.

Countries and companies operating in the Americas are best positioned to lead the way in renewable adoption, aided by carbon pricing measures and an already significant integration of ‘green’ solutions in key operations, according to Fitch.

The research arm of the Fitch ratings agency expects solar photovoltaic (PV) and wind capacity to dominate the share of renewables favoured by miners, moving forward.

This opinion is backed up by a number of recent announcements in the industry, including B2Gold opening a solar plant in Namibia, ENAPAC building the largest ever solar-powered desalination plant in Chile’s Atacama and IAMGOLD switching on the largest hybrid solar/thermal plant in Burkina Faso.

“Despite increasing social pressure to improve environmental, social and governance (ESG) standards, we believe that the price motive will remain the driving factor behind mining companies’ decision to increasingly shift their energy consumption towards renewables in the short term,” the company said.

The firm’s Energy and Mines division estimates energy costs, primarily made up of grid electricity, coal, diesel or natural gas, account for up to 30% of miners’ balance sheet costs, with costs expected to increase over the coming years as ore reserve depletion leads to more energy intensive mining methods.

“In an environment where miners will remain committed to keeping costs down, the use of renewables offers significant cost-reduction potential ahead as technology improvements and larger scale being achieved among equipment manufacturers lead to falling prices, while maintenance costs are negligible compared to conventional generation,” Fitch said.

The flexibility of these solutions also offers grid-tied miners in locations where mining markets are immature or energy supplies are at risk extra security.

“For instance, Zambia’s overdependence on hydropower resulted in a tariff dispute between the government and the country’s key copper miners last year that led to power outages and production stoppages at Glencore’s Mopani Mines, one of the country’s largest,” Fitch said.

Against this backdrop, Fitch says countries already implementing widespread regulatory and policy changes in anticipation of a shift to a low carbon economy will be at the forefront of adopting renewables in mining.

Chile and Canada are two such hubs that have already introduced carbon pricing schemes to incentivise miners.

This has seen the likes of Barrick Gold, IAMGOLD, AurCrest Gold and Godlcorp invest in renewables/mine electrification in the latter country.

Chile, meanwhile, is to remain a global outperformer in terms of the number of miners adopting renewables and the total installed wind or solar capacity, according to Fitch.

“Up to nine different mining companies have installed either wind or solar-generating capacity in the country to date, including copper mining giants Codelco and Collahuasi and Antofagasta Minerals, which boasts 191.5 MW of installed solar PV capacity at its operations,” Fitch said.

Chile’s Association for Renewable Energy has projected 100% of the national grid in Chile could be powered by renewables by 2050.

India and China are also pushing forward with measures to reduce greenhouse gas emissions, while Argentina and South Africa have proposed carbon trading schemes of their own.

And, while secondary to cost-efficiency, ESG considerations will have a growing influence on mining companies’ decision to shift their energy consumption away from fossil fuels and into renewables, Fitch said.

“We believe mining companies will intensify their investments into renewable energy, battery storage, energy efficiency and carbon capture and storage in order to improve their social licence to operate over the coming years,” the company said.