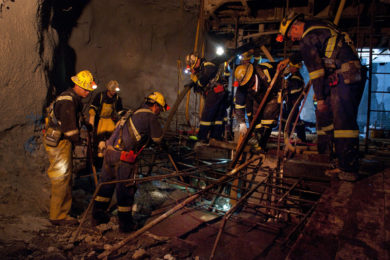 The partners at the Resolution copper project in Arizona, US, are likely to look to automation to solve the problems that come with operating at depths up to 2,100 m and temperatures in excess of 70°C, according to a member of Rio Tinto’s Growth & Innovation team.

Rob Atkinson, Head of Productivity & Technical Support for Rio’s G&I team, said operating at such a depth meant it really had to be “a fully autonomous mine”.

Resolution is a joint venture between Rio and BHP, with the former owning 55% and the latter 45%.

The proposed block cave hosts one of the largest undeveloped copper deposits in North America, with a 1.79 Mt resource grading 1.54% Cu. When up and running, it is expected to operate at a rate of around 120,000 t/d, producing some 1,000 MIb/y (453,592 t/y) of the red metal. This would make it one of the biggest copper mines on the continent.

While sinking this, Cementation USA came across huge inflows of water and rock temperatures of up to 80°C, making excavation particularly tricky.

This is why haulage in the mine is likely to be carried out by autonomous equipment. According to a 2017 interview with then Vice President of Operational and Technical Support for Rio Tinto’s Copper & Diamonds business, Craig Stegman, autonomous LHDs could also potentially feed an autonomous ore handling system at the underground mine.

And, in addition to this, there is also the possibility of using battery-powered LHDs at the operation.

Stegman, at the time, said Rio was working with suppliers such as Caterpillar, Sandvik and Komatsu to create an alternative to vehicles that were tethered to an electrical connection.

The deposit, located 96 km east of Phoenix, near the town of Superior, is still some way off being exploited.

The Resolution Copper joint venture (55% Rio Tinto, 45% BHP) confirmed back in June that rehabilitation work at its No 9 Shaft was on track for completion in 2019. This shaft would then have to be deepened and connected to No 10 Shaft in 2021.

While the mine is likely to be autonomous, the operation is expected to employ some 1,400 direct employees as well as a further 2,300 contractors and other support roles, according to Rio.