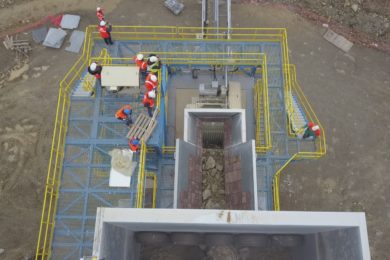 Just over a week since confirming mechanical completion of the La Parrilla crusher plant, W Resources has fed the first mined ore into the circuit at its tungsten-tin operation in western Spain.

Michael Masterman, Chairman of W Resources, said: “First ore into new crusher was achieved on December 18, 2018, ahead of the January 2019 target and is a great credit to the team at La Parrilla.”

The crushing circuit at La Parrilla, supplied by Metso Minerals’ Portugal division, has been engineered to minimise creation of tungsten fines and is designed to process 350 t/h of ore, according to the mining company. It is made up of a C130 jaw crusher and secondary cone crusher, both with vibrating grizzlies prior to size reduction, and two tertiary cone crushers in closed circuit with a double deck banana screen.