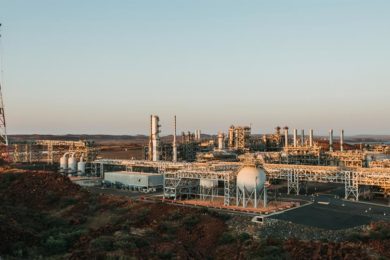 Sheffield Resources has secured a 15-year agreement with Woodside Energy and Energy Developments Pty Ltd (EDL) for the supply and delivery of 1,950 TJ/y of liquified natural gas (LNG) to its Thunderbird mineral sands project in northern Western Australia.

LNG will be supplied from Woodside’s Pluto LNG truck loading facility, near Karratha in Western Australia (pictured), and transported to Thunderbird’s LNG storage facility by a newly formed joint venture between Woodside and Energy Developments. The JV will own and operate a purpose-built road tanker fleet to safely and reliably deliver the LNG to Thunderbird. This is customary with other gas logistic arrangements in place for the towns of Broome, Derby and other communities in the Kimberley region, according to Sheffield.

“The advantage of using LNG at Thunderbird is three-fold, providing Sheffield with a low-cost, low-emission fuel source that is ideally suited to the ilmenite low temperature roast (LTR) process proposed for the Thunderbird processing plant,” Sheffield said.

“Part of the A$95 million ($68 million) financing package will be allocated to the proposed Thunderbird LNG storage and power station facilities, which will be constructed and operated under separate agreement with third parties,” the company said.

“This arrangement will enable Sheffield to capture long-term gas supply cost savings relative to the bankable feasibility study (BFS) published in March 2017. The BFS assumed an outsourced LNG storage and power station facility model on a build own and operate basis.”

The NAIF funding arrangements enable in-sourcing of LNG storage and power station facilities to take place, providing significant reduction in operating costs compared with the BFS assumptions, according to the company.

The agreement is subject to several customary conditions precedent, including the company making a final investment decision toward the development of Thunderbird.

Sheffield Resources Managing Director, Bruce McFadzean, said: “The project is now fully permitted and construction ready, with offtake and financing agreements in place. We look forward to continuing our relationship with Woodside and EDL as we move toward development during 2019.”

Back in November, Sheffield signed up GR Engineering Services to build a 7.5 Mt/y mineral processing plant and associated facilities at Thunderbird.