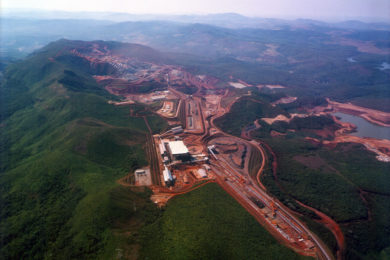 Vale says it has been made aware of a decision by the 22nd Civil Court of the Comarca of Belo Horizonte, Brazil, ordering the iron ore miner to stop using its Laranjeiras, Menezes II, Capitão do Mato, Dique B, Taquaras, Forquilha I, Forquilha II and Forquilha III dams.

The decision, which is within the scope of the public civil action no 5013909-51.2019.8.13.0024 filed by the Public Prosecution Office of the State of Minas Gerais, could see the company have to close the Brucutu mine (pictured) in its Minas Centrais complex, cutting some 30 Mt/y of iron ore supply.

The Brucutu unit is the largest iron mine of Minas Gerais in production, and the second largest in the country, only behind Carajás, in Pará, according to the company.

Among the dams included in the court order, three were built by the upstream method – Forquilha I, Forquilha II and Forquilha III – and were already inactive and covered by the accelerated decommissioning plan Vale previously announced to the market. The other structures, including the Laranjeiras dam at Brucutu, were built by the conventional method.

“These structures built by the conventional method have the sole purpose of sediment containment and not tailings disposal except in the case of the Laranjeiras dam,” Vale said. “All dams are duly licensed and have their respective stability reports in force. Vale therefore understands that there is no technical basis nor risk assessment to justify a decision to suspend the operation of any of these dams.”

Vale said it will adopt the “appropriate legal measures” in relation to this decision and reiterated that all the emergency measures necessary to assist the impacted people and to mitigate the impacts resulting from the breach of Dam I of the Córrego de Feijão mine are being duly adopted.