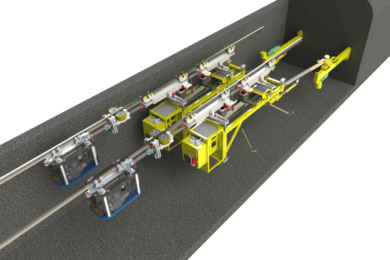 At the same time as reporting record gold production for 2018, Torex Gold has provided an update on its innovative in-development Muckahi underground mining system.

In tandem with these results, the company’s President and CEO, Fred Stanford, talked up the company’s Muckahi concept, an alternative to established underground mining processes that, Torex says, can create a more continuous mining process able to accelerate return on investment.

Stanford, who is credited as the originator of the technology, said in the company’s 2018 financial report: “If proven successful in 2019, the Muckahi technology will reduce the costs of future underground mining on the Morelos property (which includes the ELG and Media Luna assets) and will provide us with a competitive advantage when bidding on potential acquisitions and pursuing other options for commercial deployment.”

He said the testing programme for the Muckahi technology was expected to be completed in 2019, with the first of four Muckahi machines on site in Mexico. “We anticipate breaking rock with it in the next couple of months,” he said, adding that as the other machines arrive, the company would incorporate them into the test programme.

The planned use of the Muckahi system, which is also being developed with help from MEDATECH, in the most recent preliminary economic assessment for the Media Luna project saw the after-tax internal rate of return jump from 27% to 46%.