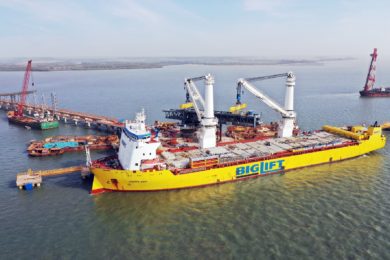 The final major piece of equipment for Emirates Global Aluminium’s in-development bauxite mining project in the Republic of Guinea has arrived in the West African country, the company reports.

The Barge Loader was shipped to Guinea from thyssenkrupp’s fabrication facility in India. It will be installed at the end of the project’s 1.5 km pier, where it will load bauxite ore into self-propelled barges for transport to waiting bulk cargo ships offshore, EGA said.

The Barge Loader is the last in a series of massive pieces of equipment for the project to arrive in Guinea, which includes some of the largest ever installed in a mining project in Africa, according to EGA.

Abdulla Kalban, EGA’s Managing Director and Chief Executive Officer, said: “All the major pieces of equipment for our Guinea project have now safely arrived, completing a series of challenging engineering and logistical feats. Construction overall is very well advanced and we look forward to its safe completion and the start of bauxite exports later this year.”

The project is being developed by EGA’s subsidiary, Guinea Alumina Corp, and has a total budgeted project cost of around $1.4 billion. First bauxite exports are expected during the second half of 2019.

Just last month, the company loaded the first batch of bauxite from the project.