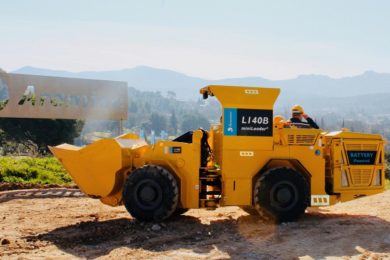 Underground vehicle specialist Aramine says it has signed a partnership agreement with Russia uranium producer, ARMZ, for the assembly of its L140B battery-powered miniLoader.

“Production of Aramine battery loaders will improve the working conditions of the miners, increase the level of safety and, of course, increase the volume of ore mining,” Verkhovtsev said.

Just a few months ago, Aramine looked to extend the continuous working time of its battery-powered miniLoader L140B by providing a battery change-out option.

This miniLoader L140B, launched in 2017, is an optimised and advanced version of the L120B, carrying more capacity – 1.3 t. While the company’s new option allows the machine to run full time without being immobilised during charging, the standard L140B offers four hours of continuous operation. This allows for the mucking of three to four faces in one shift with a simple charging system integrated into the machine and requiring a plug to the wall, according to the company.

The miniLoader does not require massive electrical installation, with the power required only being about 7 kW, compared with the 45 kW typically needed for an electric machine with cable, the company said.

ARMZ recently announced plans to reduce the level of risk both underground and above-ground at its industrial complexes, with Verkhovtsev saying the company was looking at, among other things, automation and implementation of the most modern technologies at its operations.