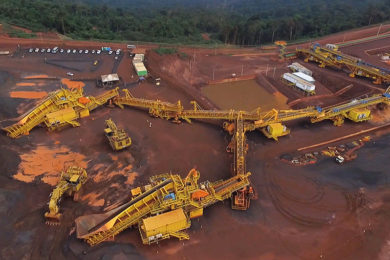 Vale has confirmed a Reuters news report from last week stating that it would spend an additional BRL11 billion ($2.5 billion) on dry iron ore processing over the next five years.

The company said it has invested nearly BRL66 billion installing and expanding the use of dry processing, using natural moisture, in iron ore production in its operations in Brazil over the last 10 years and it would carry on this trend.

“By not using water in the process, no tailings are generated and, therefore, there is no need for dams,” the company said, added that about 60% of Vale’s production today is dry, and the goal is to reach 70% in the next five years.

Dry processing is used in the mines of Carajás, Serra Leste and the S11D Eliezer Batista Complex (pictured), in Pará, Brazil, and in several plants in Minas Gerais. In Pará, in the Northern System, about 80%, of the almost 200 Mt produced in 2018 was through dry processing. The main Carajás plant, Plant 1, is in the process of conversion to natural moisture: of the 17 plant processing lines, 11 are already dry and the remaining six wet lines will be converted by 2022.

Serra Leste’s treatment plants, in Curionópolis, and S11D, in Canaã dos Carajás, also do not use water in ore treatment, according to Vale. In S11D, for example, the use dry processing, using natural humidity, reduces water consumption by 93% when compared to conventional iron ore production.

In Minas Gerais, dry processing increased from 20%, in 2016, to 32%, in 2018. Today, this type of processing is present in several units, such as Brucutu, Alegria, Fábrica Nova, Fazendão, Abóboras, Mutuca, Pica and Fábrica. “Over the following years, the objective is to roll it out at other locations in Minas Gerais, such as the Apolo and Capanema projects, which are currently under environmental licensing,” the company said.

Vale said: “Dry processing is linked to the quality of the iron ore extracted from mining. In Carajás, as the iron content is already high (above 64% Fe), the ore is only crushed and sieved, so it can be classified by size (granulometry).

“In Minas Gerais, the average content is 40% iron, contained in rocks known as itabirites. To increase the content, the ore is concentrated by means of wet processing (with water). The tailings, composed basically of silica, are deposited with water in the dams. The high-grade ore resulting from the process can then be transformed into pellets at the pelletising plants, increasing the added value of the product.”

The mills that operate dry processing in Minas Gerais depend on the availability of ore with higher levels – about 60% Fe – still found in some mines in the state. “In order to achieve the necessary quality, and be incorporated into Vale’s product portfolio, it is necessary to blend with Carajás ores, carried out at Vale’s distribution centres in China and Malaysia. The process allows Vale to offer excellent quality ore which can be tailored to meet the needs of our clients,” the company said.

The blending of the product with natural moisture does not eliminate the need for humid concentration of the low-grade itabirite used in the production of pellets. However, to reduce the use of dams, Vale plans to invest approximately BRL 1.5 billion on dry stacking technology in Minas Gerais between 2020 and 2023. This technique filters and reuses waste water and allows the latter to be stored in piles, thus reducing the use of dams. The goal is to achieve up to 70% of the waste disposed in the coming years, but success depends on the improvement of technology and external issues, such as environmental licences, Vale said.

“Today, Vale doesn’t have a dry stacking operation that can deal with the production quantity especially in a region with high rainfall indices, such as the Ferriferous four-side, in Minas Gerais. The available dry stacking technology is used on a small scale around the world – up to 10,000 t/d of tailings produced – in desert regions or with low rainfall. In Minas Gerais, Vale’s tailings production quantity is, on average, 50,000 t/d per unit,” Vale said. In 2011, the company developed a pilot project on the Cianita stack in Vargem Grande, after an investment of BRL100 million.

The studies were completed in 2018 and the technicians evaluated the geotechnical behaviour of piles under rainy conditions. The next tests will be applied on an industrial scale at the Pico mine in the municipality of Itabirito, Vale said.

“Another solution that has been studied is the dry magnetic concentration of iron ore based on the innovative technology developed by New Steel, a company acquired by Vale at the end of 2018 for BRL1.9 billion,” Vale said. “The dry magnetic concentration eliminates the use of water in the concentration process of the low-grade ore, which disposes the waste generated in sterile piles, similar to what happens in dry stacking. This technology, however, is in the industrial development stage and is not yet ready to be applied on a large scale.”