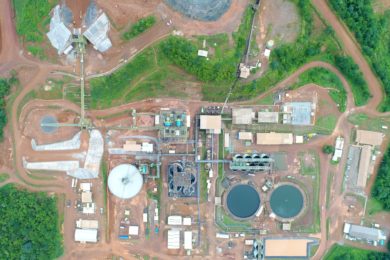 Equinox Gold says it has poured first gold at its Aurizona gold mine, in Brazil.

Christian Milau, CEO of Equinox Gold, said: “Pouring first gold at Aurizona is a significant milestone for the company and the result of the hard work and dedication of the Equinox Gold team and our contractors.

“That we accomplished this milestone with no lost-time injuries is another important achievement for the Aurizona team.”

The company has also received its License to Operate, the final operating permit for Aurizona, from the Maranhão State Environmental Agency (SEMA).

Aurizona is expected to become a low-cost open-pit gold mine, with average annual production estimated at 136,000 oz/y, according to Equinox Gold.

Equinox, late last year, reported that the new primary jaw crusher at Aurizona had been energised and dry tested with the expectation of putting first ore through the system in early-January.

The mining contractor at the operation is U&M Mineração e Construção S/A (U&M) and the EPCM contractor is Ausenco Engineering Canada.