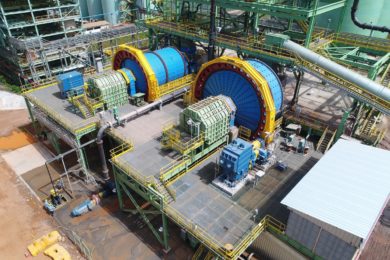 Equinox Gold says it has achieved commercial production at the Aurizona gold mine, in Brazil.

The milestone, which occurred on July 1, follows the processing plant, in the month of June, operating at an average throughput of around 90% of nameplate capacity (8,200 t/d), exceeded 90% average recovery and producing more than 7,000 oz of gold. It also follows the first gold pour in May.

Gold production is expected to continue to increase through the September and December quarters of 2019, with average life-of-mine production estimated at 136,000 oz/y.

Christian Milau, Equinox Gold’s CEO, said: “Achieving commercial production at Aurizona is a significant milestone, making Equinox Gold a multi-mine producer and bringing us one step closer to our near-term target of having three mines in production in 2020.”

With commercial production at Aurizona achieved, the final condition pursuant to the previously announced corporate revolving credit facility has been completed and the remaining $30 million of the total $130 million has been made available to the company.

The mining contractor at the Aurizona operation is U&M Mineração e Construção S/A (U&M) and the EPCM contractor is Ausenco Engineering Canada.