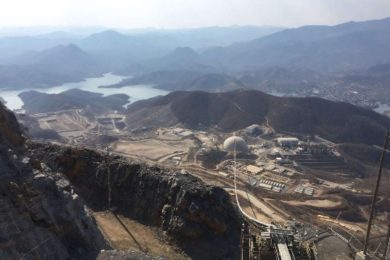 It was quarter of milestones for Torex Gold Resources in the three months to the end of June, with a record production number from the company’s ELG complex, in Mexico, and more progress on the company’s innovative Muckahi underground mining system.

With the quarterly production result, the company reiterates full-year sales guidance of 430,000 oz (+/- 7%), which is weighted towards the second half of 2019.

Fred Stanford, President and CEO of Torex, said: “Q2 was a notable quarter from a number of perspectives. Record total ounce production has been highlighted already. The 1 Moz was also surpassed in the quarter.

“The mining team produced at record levels, both in ore mined in the open pits and underground. Throughout the quarter the processing team made progress in reducing reagent consumption and, late in the quarter, they made improvements in throughput rates per hour.

“Overall, quarterly throughput was hampered by unrelated unplanned downtime in late June. The team has work to do to increase the predictive and preventative aspects of maintenance.”

The Muckahi team also had an excellent quarter, according to Stanford.

“They demonstrated the effectiveness of the drilling system (Jumbo) on the level and have now turned their attention to demonstrating that the system is effective on a -30 degree down ramp,” he said.

“In five rounds, they have completed the transition from a level tunnel to a -30 degree down ramp. In July, they will push forward with the down ramp and initiate the testing of the slusher-based muck removal system. Interesting times!”

The Muckahi concept is an alternative to established underground mining processes that, Torex says, can create a more continuous mining process able to accelerate return on investment.

Learn more about the concept and technology by clicking here.