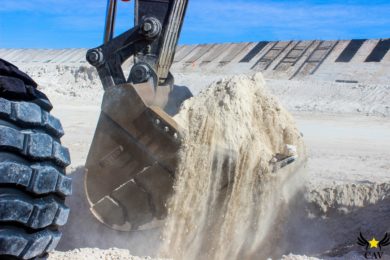 Fluor says it has been awarded an engineering, procurement and construction management (EPCM) contract by Cupric Canyon Capital for its Khoemacau copper and silver project in northwest Botswana.

The company booked the undisclosed contract value in the June quarter of 2019, it said.

This announcement follows hot on the heels of the groundbreaking ceremony (pictured) at Khoemacau and Barminco being awarded a five-year underground mining contract at the 3.6 Mt/y Zone 5 mine.

Tony Morgan, President of Fluor’s Mining & Metals business, said the two companies previously worked together on the project’s front-end engineering and design phase to establish a “capital-efficient design and execution plan” for the project. This saw Fluor involved in construction management of the early works for the camp upgrade, bush clearing, transport corridor and surface infrastructure terrace preparation, he added.

Fluor’s EPCM scope includes upgrading the existing copper concentrator plant and new mine surface infrastructure, with the project expected to produce 62,000 t/y of copper and 1.9 Moz of silver with a life of mine in excess of 20 years.

Morgan said: “We will leverage our local capabilities and extensive copper experience to execute the Khoemacau project with excellence – safely, on time, on budget and with quality.”

Fluor has worked in Botswana since the early 2000s and opened an office in Gaborone in 2015. From Gaborone, it delivers safety, cost-competitive innovations and execution excellence to clients, it said.