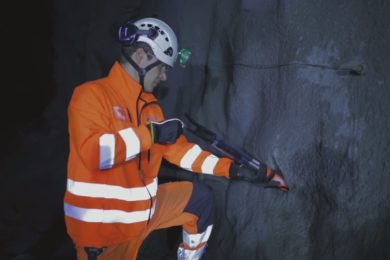 Orica’s WebGen™ 100, the first truly wireless rock blasting system, has been used in trials at the zinc-copper-pyrite mine since September 2018, with FQM, to date, carrying out five blasts.

Since the invention of the safety fuse by William Bickford in 1831, there has been three revolutions in blast initiation methods – electric detonators (1930s), shock tube (1980s) and electronics (~2000s). Every new initiation method development has increased the safety, precision and possibilities of initiating blasts.

The new Safety Integrity Level 3 certified WebGen system could end up being the fourth revolution in this line-up, Orica believes.

Still in its infancy with, as of August, more than 250 blasts fired using wireless initiation, the WebGen technology has already led to the development of several new mining techniques such as Temporary Rib Pillar (TRP), Temporary Uppers Retreat Pillar, Reverse Throw Retreat, Longitudinal Transverse Retreat and Pre-Loaded Retreat that would not be viable or possible without wireless blasting technology.

The operation works as follows: The i-kon plugin detonator plugs into the DRX, energising the device and initiating a self-test. After passing the self-test, the device can be encoded with the blast code and the delay timing. The booster is attached after encoding the device. At this stage the WebGen primer is ready to be placed into the blasthole.

The transmitter controller – a magnetic induction system connected to an antenna – sends the arming signal to the transmitter. Once the arming process is successful the firing window is presented to the blaster.

The CMC is the data hub of the system and supplies the identification and firing codes as well as the mine specific codes. Orica explained: “It culminates in the ready to fire file for transmission.”

With the elimination of lead wires, it is possible to pre-charge a full stope (eg sub-level caving mining method) and fire every ring when required without sending personnel back to the dangerous brow area to connect lead lines, Orica says. “Misfires related to damaged wires are eliminated and primers can be fired regardless of any dislocations of blasthole and/or charge.”

The Ernest Henry mine, in north-eastern Australia, engaged Orica in 2016 to perform a demonstration of sub-level caving using WebGen. The mine wanted to reduce the time spent by personnel at the brow of the cave. With the use of WebGen they were successful in pre-loading the stope production rings and eliminating the need to return to the brow for hooking up.

At Newmont Goldcorp’s Musselwhite mine, productivity and ore recovery were the main drivers for looking into wireless blasting. Together with Orica, Musselwhite developed the TRP mining method where a temporary pillar is used to withhold backfill while the second mass blast (i-kon electronic detonators) of the stope is mucked out.

Orica explained: “Once the stope is mucked out, the TRP is fired remotely and the ore can be recovered.”

With this method the mine established a 93% reduction in dilution, increase in mucking of 27% and a two-week saving in time per stope, the company said.

In March 2018, a team of Orica Technical Services Engineers commenced preparations and planning for the first wireless demonstration in Europe with the FQM Pyhäsalmi mine, in Finland, the deepest mine in the continent.

At the time, the mine was scheduled to close in September 2019; most of the stopes had been mined out and the remaining stopes and pillars were becoming increasingly challenging to mine. Orica said: “Pyhäsalmi had developed a system to mine the stranded pillars, but this was incurring considerable time and costs. Pyhäsalmi mine acknowledged that WebGen 100 could be a solution for the problems in retrieving remaining ore in difficult areas.”

As a first stop, the Orica team of blasting specialists had to assess if the WebGen system would successfully function in Pyhäsalmi mine. “Before firing the WebGen shot it was important to investigate if the system would work in the mine and what the maximum signal reach would be for both the quad loop and cable loop antenna,” the company said.

Signal strength testing provides positive confirmation of coded signals being received through the mine and also validates if there are any parts of the mine where the system has a reduced range.

A smaller antenna and a larger antenna were tested.

Pyhäsalmi experiences occasional sulphur dust explosions and, therefore, personnel are not allowed to be underground while blasting, Orica said. As a result, blasting takes place at the end of the shift after the shift explosives supervisor checks everyone has vacated the mine.

It was validated the system could send and receive signals from the production level to the furthest stope, which was 450 m away, Orica said.

After assessing the MI signal test results, it was decided it would be more convenient to use the smaller antenna.

In September 2018, the EMEA WebGen team returned to Pyhäsalmi mine for the first wireless blast in Europe. The final three rings of stope 18b10-11 on Level 1,175 were selected for the demonstration blast.

Since the introduction of wireless blasting, Pyhäsalmi mine has fired a total of five blasts in challenging areas.

For one of the wireless blasts, a stope would not be accessible after the first blast, but, as the stope could be pre-loaded with wireless detonators, the mine could blast and produce 4,000 t of extra ore that otherwise would have been sterilised.

Katja Sahala, Mine Planning Engineer, FQM Pyhäsalmi mine, said she saw the WebGen wireless system as helping operations in several applications such as when ore needs to be left behind to support pillars, or where there is weak rock, or fill and selective mining is required.

She said: “In uphole charging, you need to work close or even below an open face during drilling and blasting. If it’s possible to drill and charge an entire stope before the first hole is fired, then safety will surely be improved.”

Orica said wireless blasting is a new and exciting technology that eliminates the use of cumbersome and complex wiring hook-ups while having the accuracy of an electronic detonator. It has already enabled safer work methods and mining techniques that increase recovery, productivity and efficiency, according to the company.

It concluded: “Many technical and regulatory challenges will be faced by wireless blasting, but it is a fundamental step in the automation of the explosives charging and blasting process. With the first WebGen blasts at FQM Pyhäsalmi mine, wireless blasting is no longer a dream in Europe, but a reality.”