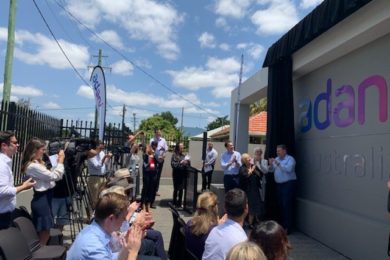 Adani has announced a more than A$100 million ($68 million) rail contract for the Carmichael thermal coal project has been awarded to Martinus Rail, with the contractor set to base itself out of Adani’s newly opened Rockhampton Business Centre (pictured).

The contract award and delivery out of the centre will ensure “Rockhampton businesses and people will be in prime position to participate in the contract delivery”, the company said.

The development of the first stage 10 Mt/y coal mine at Carmichael, which was given the thumbs up to start construction earlier this year, will lead to the building of a circa-200 km narrow gauge rail network that connects to existing rail infrastructure and goes from the mine to the Port of Abbot Point. The initial design capacity of this line is for 40 Mt/y, with the ability to further expand, according to Adani.

Adani Mining CEO, Lucas Dow, said more than A$450 million worth of contracts had already been awarded on the Carmichael project, the majority to regional Queensland areas.

“Since receiving our approvals we have not wasted a moment. Construction on the Carmichael mine and rail project is well and truly underway on site, and our big contracts are now also lined up as we ramp up activity.”

He added: “We now have our mining services contractor and one of our earthworks contractors for the rail project in place based in Rockhampton, Martinus Rail will be our rail laying construction contractor also in based in Rockhampton, initial rail camp provision will be based in Collinsville, earthworks and civil works is coming from Townsville, fuel supply is from Townsville, telecommunications is from Mackay, and many other regional businesses across regional Queensland also have a piece of the pie,” he said.

Managing Director for Martinus Rail, Treaven Martinus, said Martinus is a large-scale railway construction contractor with a focus on delivering regional railways for mining and government clients across Australia and New Zealand. “Our business delivers large-scale regional rail projects across Australia and we do it successfully by tapping into the local workforce, which is a commercially viable approach for us while also providing training, skills and benefits for local communities,” he said.

Dow, meanwhile, said the new Adani Rockhampton Business Centre would provide a local base for major procurement and recruitment programs for the Carmichael project during the construction phase and during operations.

“Our new Rockhampton Business Centre will help us ensure Rockhampton and Townsville, where we have an existing office, act as the primary employment hubs for the Carmichael project,” he said.

The business centre will be a base for recruitment and procurement activity and will be used for training sessions, meet the buyer sessions, recruitment interviews, staff induction programs, act as a base for some of our contractors and more.