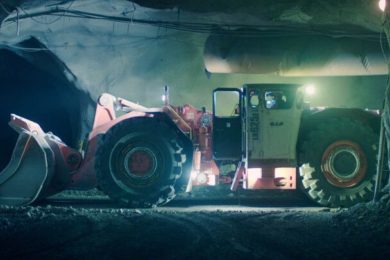 Sandvik says it is preparing to deliver its renewed Sandvik LH625iE electric loader for field testing at the LKAB-owned Kiruna mine, in northern Sweden.

The unit to be tested is the 600th electric loader from Sandvik, and is custom-designed to meet the needs of the underground iron ore mine, it said.

The underground loader, which features a 9.5 m³ bucket and 25,000 kg payload capacity, is designed to operate in the world’s largest underground iron ore mine.

The basic LH625iE design is well-proven (and based on the LH625E, pictured), according to Sandvik, with the equipment manufacturer delivering electric loaders powered by a trailing cable for more than 35 years.

In addition to using the proven design and robust structures, today’s Sandvik LH625iE belongs to its i-series, featuring advanced technology, latest digital solutions and smart connectivity. This sees the new Sandvik LH625iE equipped with Sandvik Intelligent Control System and My Sandvik Digital Services Knowledge Box™ as standard. To utilise the payload capacity it offers, the loader can also be fitted with Sandvik’s Integrated Weighing System, as well as AutoMine® and OptiMine® solutions, Sandvik said.

With a total length of 14 m, bucket width of 4 m and cabin height of 3 m, the LH625iE is able to offer a roomy, ergonomically designed operator’s compartment, Sandvik said. “For example, the spacious cabin is equipped with a unique 180° turning seat which significantly improves operator ergonomics because it can be turned to face in the direction of travel rather than requiring over-the-shoulder visibility. The upgraded Sandvik LH625iE has an IE4 classified energy-efficient electric motor, with a further significant improvement being the totally new, low-tension reeling system to increase the trailing cable’s lifetime. “

The collaboration between Sandvik and LKAB’s mine in Kiruna dates back 20 years, during which time Sandvik has delivered a total of 28 loaders.

Michael Palo, Senior Vice President, Northern Division at LKAB, said: “We are satisfied with the loaders delivered from Sandvik, with 14 still in production today. We have had a long and good collaboration and look forward to a good continuation.”

Sandvik concluded: “The Sandvik LH625iE is living proof that it is possible to achieve enormous carrying capacity and productivity without the use of traditional diesel engines and fossil fuel.”