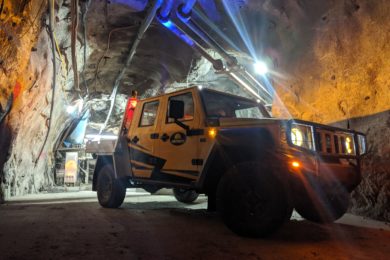 The Australia-based METS company, which manufactures and supplies safety products to the mining industry globally, took its battery-electric vehicle on a tour of Kambalda at the end of February and Safescape has already started receiving positive feedback.

A battery-electric vehicle designed to handle the aggressive operating environment of underground mines, the Bortana EV uses the chassis of a diesel-powered Agrale Marruá, electric technology from 3ME and Safescape’s design and engineering expertise.

The first stop on the tour was Mincor’s Long nickel mine. Mincor has a long history of nickel production in the prolific nickel belt and, with a lack of new nickel sulphide projects and prices projected by many to climb – in part due to the rise of lithium-ion batteries using nickel sulphate – the company is preparing to reinvigorate its Kambalda mines. These assets include the first greenfields discovery in the region for over 20 years – the high-grade Cassini project.

There are strong arguments for battery-electric equipment in underground mines that include improved health and safety outcomes (especially with no diesel emissions), efficiency gains and reduced maintenance and operating costs. While the deployment of this technology in mining is in its early stages, Mincor is not prepared to wait in the wings. Mincor’s Managing Director, David Southam, said as recently as October 2019, that the restart of its nickel mines in Western Australia would act as a “global showcase” for all-electric underground light vehicles when the mines reopen in the next few years, and Mincor, last month, became the first miner in Western Australia to host the Bortana EV.

Mincor COO, Dean Will, said: “Long is a large mine that is currently on care and maintenance, but with plans to be back in production as part of Mincor’s restart of nickel mining.

“We were able to define a course through the [mine] workings taking the vehicle from surface to 1,100 m underground via a range of road conditions including an area we were able to moisten down to create extremely slippery conditions that would challenge any four-wheel-drive vehicle.”

He added: “The performance of the vehicle generally, and in particular through the worse road conditions, far exceeded our expectations.

“The Bortana includes onboard 1,000 V charging capability, which was tested multiple times throughout the trial period. We also love the angle that the Bortana EV battery contains a high content of nickel and we are planning on utilising these vehicles underground to mine our high-grade nickel which is ultimately destined for the EV market.”

Martin Kime, COO of 3ME Technology, which supplies the batteries and electric drive train for the Bortana EV, was in attendance during the Long trials.

He said: “The opportunity to present the vehicle to several groups from leading mining and contracting companies over a short period in Kambalda was incredible. Because this technology is so new it is difficult to explain it without some physical reference point. Companies were able to experience the Bortana vehicle in realistic terrain and then ask questions about how we are able to deliver such smooth and efficient operation.

“3ME typically works directly with our OEM customers to create electric vehicles but it’s important that our team understand the application and, as such, we’ve all attended various underground and open-pit mine sites supporting Safescape. We find all of these mines want the same thing: safer, healthier mine environments with improved costs but without adding new risks or hazards to their operation.”

Safescape’s Managing Director, Steve Durkin, was also in attendance, saying one of the best parts of his job was visiting mine sites and seeing “experienced professional miners exposed to a piece of new technology that they want to understand but have reservations about”.

He explained: “The process of transformation over one or two hours driving in and snooping around the Bortana is awesome to watch. The entire team at Safescape get a kick out of this and we’re really looking forward to continuing the journey to familiarise more miners with EV technology.”

Safescape plans to begin production of the 5.7 t GVM Bortana EV in the September quarter of 2020 and grow with customer demand.

“Whether it is the Bortana, Tembo, Voltra or Kovatera, battery-electric light vehicles for mining is inevitable,” Durkin said. “The benefits are just too large. We will look to do our part and continue to wish our coopetitors around the world the best of luck. This is a big job and together we’ll put a dent in the DPM issue underground.”