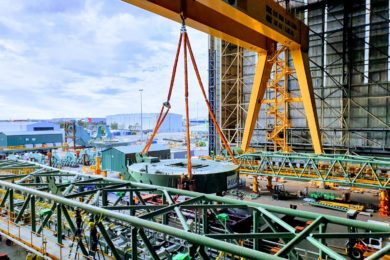 Primero Group looks set to hit the June 30 deadline for the pre-assembly of two stackers and one “off-reclaim machine” for thyssenkrupp at the BHP-owned South Flank iron ore project, in Western Australia.

In an update posted today, Primero said it was nearing completion of the pre-assembly and dressing out of 24 machine modules for thyssenkrupp, with the last of these modules being “punch listed” and signed off in preparation for shipment.

The modules will complete the world’s largest rail mounted stackers and reclaimer, which are currently under construction on site in the state. thyssenkrupp said previously that the rail mounted stacker/reclaimer units will have a loading capacity of 20,000 t/h.

Primero has been carrying out the work at the Australian Marine Complex, in Henderson, south of Perth, Western Australia, with the company saying over 10 km of cable, 2 km of piping and 200 m of conveyors had been installed. The project has seen Primero reach 75,000 project hours loss time injury free, it added.

The Primero contract commenced last year and was expected to be completed in the current Australia financial year, ending June 30, 2020.

The $4.6 billion South Flank iron ore project will be one of the largest iron ore processing hubs in the world when operating. It includes an 80 Mt/y crushing and screening plant, an overland conveyor system and rail-loading facilities. The mine will replace production from BHP’s Yandi mine, which is nearing the end of its life.

Construction began in July 2018 and first production of iron ore is anticipated in 2021.