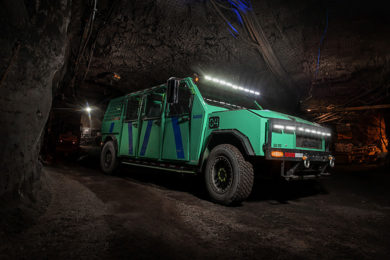 As Vale continues to go deeper at its Creighton nickel mine, in Sudbury, Canada, it is adopting alternatives to its fleet of diesel-powered haulage, loading and utility vehicles in a bid to lower operating costs and improve environmental conditions for personnel that could eventually be working nearly 3 km underground.

Vale’s PowerShift strategy, part of the miner’s 2030 sustainability goals, aims to make the company’s energy matrix “clean” by focusing on the use of renewable energy and alternative fuels, greater efficiency of operations using new technologies, and forest promotion. As part of this strategy, it will test and adopt existing ‘green’ solutions as well as develop technologies with the potential for greater impact on its carbon footprint.

This has involved the use of Rokion’s battery-powered personnel carriers/utility vehicles at Creighton.

The company has been working with Rokion for close to two years after placing an order for three of its vehicles for the Creighton mine. Alongside these vehicles are other battery-powered haul trucks, loaders and production support machines supplied by the likes of Epiroc and MacLean Engineering. All these machines are being added to the fleet as the company looks to access deeper, more ventilation-constrained areas of the mine.

Todd Van Den Enden, Process Superintendent at Creighton Mine, told IM recently that the Rokion R100, R200 and R400 units had been “very well received at Creighton Mine” and the company had moved forward in purchasing more of these units to further its battery-electric vehicle development at the operation.

The units are currently used by Vale’s service groups – such as industrial mechanics, electrical and planning departments – and generally run for the entirety of a 10.5-hour shift.

The ramps at Creighton, which go from 15-20% on both the incline and decline, according to Van Den Enden, will aid the continual operation of these battery-powered machines. Equipped with lithium-iron phosphate battery technology, the Rokion units recharge their batteries on descent thanks to regenerative braking. This translates to not only a longer operating time without charge, but also greater savings per vehicle over the life of the mine, according to Rokion.

Rokion trucks can navigate mine sites with 20% grade at a full gross vehicle weight and full speed while traveling more than 70 km per charge, according to the company. This is more than enough to get through a full shift without charging.

This means the vehicles are typically only charged after the 10.5-hour shift is complete at Creighton, according to Van Den Enden. The larger R400 (pictured), which includes a six- to 12-passenger crew truck and a three- to nine-passenger utility option, has completed two shifts on a single charge during testing.

When charging is required, the Rokion units can rely on existing mine power infrastructure, with the charging procedure no different to the way people top up the charge on their Tesla vehicles, Rokion says. The company worked within the Global Mining Guidelines Groups’ BEV guidelines to design this standardised system.

He explained: “We have roughly 1,200 hours on these units and we see advantages with the availability.”

While availability is a key selling point, Rokion says its battery-powered vehicles have been designed for simple and easy maintenance. The modular change-out options – which extend to both the battery and drive system – are “ideal for remote mining locations where the priority is to have dedicated service personnel with expertise in production mining equipment”.

Rokion explained: “A mine is not going to hire an expert in battery power when introducing a new truck such as this, so we take that aspect out of the equation, compartmentalising our battery systems into a modular form so that they can be easily switched out.”

Mine operators can visualise the operation of their vehicle assets by accessing a live fleet management system that streams data between the truck and site operations team, according to Rokion. This helps customers identify vehicles that are low on power or may need servicing. Customers also have the option of having this data routed to Rokion for additional support, the company says.

“Managing this data into useful information has become a valuable tool in helping to improve operational efficiencies for our customers,” the company said.

While there is the very real prospect of Rokion selling more units to Vale’s Creighton operation, it is also working with the miner on refining its latest R400 unit, which, it says, was engineered to be the company’s most adaptive and modular truck platform.

Van Den Enden said the R400 unit was just finishing up the testing phase with the Creighton mining department, with the machine having performed well. He said the two firms were currently working on a “minor update” for the next series of this unit.