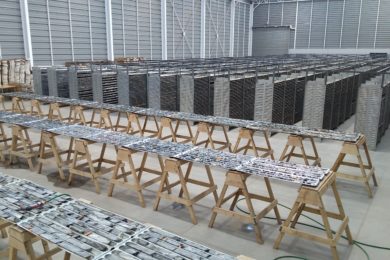 Los Andes Copper says additional comminution test work has confirmed the selection of high pressure grinding rolls (HPGR) circuit technology for use in the processing circuit at its Vizcachitas copper project in Chile.

The use of HPGR, and the adoption of the previously announced dry-stack tailings, reinforces the company’s commitment to the environment and designing a sustainable operation with low energy and water consumption, it said.

At early stages of the Vizcachitas prefeasibility study (PFS), HPGR technology had been identified as the most attractive grinding alternative, given the data obtained from preliminary test work conducted in 2009, and in 2017-2018. As part of the PFS metallurgical test work, four representative samples from the mine plan were sent to a laboratory for pressure bed testing. The results of this test work confirmed the equipment sizing and its performance for a PFS-level study.

The results provided specific energy consumption readings of 2.17 kWh/t in the case of a HPGR circuit, which results in a global specific energy consumption of the comminution circuit of approximately 14 kWh/t. As compared with the semi-autogenous grinding alternative, the HPGR showed a reduction of up to 20% in energy and up to 50% in grinding media consumption, Los Andes Copper said. These results confirm the advantages of adopting this technology at the project.

The comminution circuit at Vizcachitas, where the HPGR circuit will be incorporated, is a three-stage crushing circuit using a gyratory primary crusher, three cone crushers in open circuit and two HPGR as a tertiary stage arranged in a closed circuit followed by ball mills. Through this process, and in addition to the lower energy consumption, the use of HPGR will reduce dust emissions related to dry crushing due to the removal of coarse recirculation in the secondary crushing stage, the company said.

Fernando Porcile, Executive Chairman of Los Andes, said: “I am pleased that the results from the test work carried out to date have confirmed the advantages of using HPGR in terms of enhancing project economics, lowering energy consumption and increasing operational flexibility.

“The use of HPGR technology favours the stability of the dry stacked tailings operation, as well as reducing the environmental impact by minimising energy usage, water consumption and dust emissions.”