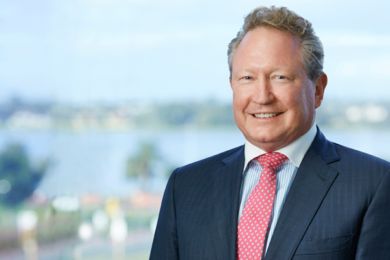 A commercial plant, powered entirely by wind and solar, could be constructed in the next few years he said in the first Australian Broadcasting Corporation (ABC) Boyer Lecture for 2021, entitled: ‘Oil vs Water: Confessions of a Carbon Emitter’.

In a wide-ranging talk, he acknowledge that Fortescue was trialling both known methods of making “zero-carbon-steel” without the use of coal in Australia: replacing coal in the furnace with ‘green hydrogen’ and adding carbon separately to strengthen the steel, and “zap[ping] the ore with renewable electricity”.

On the development of such an industry, Forrest said: “We could look at losing our coal industry as a national disaster – yet, I’ve always believed, out of every setback, is the seed of equal or greater opportunity.

“We produce over 40% of the world’s iron ore. And our potential green energy and hydrogen resources are immeasurable.

“If Australia were to capture just 10% of the world’s steel market, we could generate well over 40,000 jobs – more than what’s required to replace every job in the coal industry.”

Fortescue, through its Fortescue Future Industries company, has been signing agreements to leverage hydro-electric power and geothermal energy to become one of the “world’s largest green energy and product businesses”, Forrest said.

“We’re now undertaking feasibility studies that could lead to some 300 GW of power – more than four times what Australia can produce,” he explained.

Forrest also mentioned some of the decarbonisation work Fortescue is currently working on.

Back in December, Fortescue Chief Operating Officer, Greg Lilleyman, announced the company was working on developing an in-house, non-diesel 240 t haul truck prototype that will test both battery-electric and fuel-cell electric drivetrain technology in the Pilbara of Western Australia.

Seemingly referencing this project, Forrest said: “By the end of the decade, our trucks will run on renewable energy. Imagine that: a fleet of vehicles that produces nothing more than steam as exhaust.”

He also said the company was aiming to develop “green iron ore trains” powered by either renewable electricity or “green ammonia”.

Looking at the company’s shipping operations, he said 2021 would see the company “begin to settle designs” that allow its ships to run on “zero-pollution, green ammonia”.

He added: “And we’re willing to share that knowledge, to help our competitors go green too – including Vale, one of the largest mining companies in the world.”