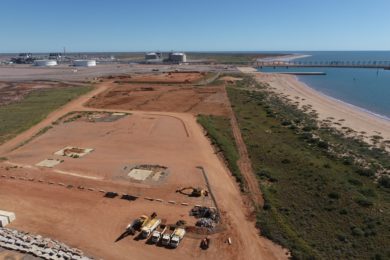 Mineral Resources has commenced early works at its Onslow Iron project in the Pilbara region of Western Australia, a project that, according to Chris Ellison, will be “dust-free from pit-to-port”.

The early works at Onslow, formerly known as the Ashburton project, will support first ore on ship around December 2023, MinRes says.

Onslow Iron will unlock stranded deposits that would otherwise remain undeveloped in the West Pilbara region, using MinRes’ innovative and proprietary equipment designed to process and move bulk commodities at lower costs and with a reduced environmental footprint, the company said.

Following receipt of preliminary approvals, project preparations are on track and early construction activities including bulk earthworks have commenced at the Port of Ashburton, south of Onslow. At the nearby Truck Maintenance Facility, installation of the temporary construction village is underway, with first buildings to be installed from early September.

Mine development activities have also progressed at the Ken’s Bore Deposit, east of Onslow, with construction of the A320-capacity airport and the installation of two camps to support drilling and early construction works.

Recruitment for the construction phase of Onslow Iron is also well underway alongside a continued focus on community and stakeholder consultation.

In line with the project schedule, long-lead items have been ordered including the first transhippers, which will be used to load capesize vessels that will be anchored offshore from the Port of Ashburton. Each transhipper has a 20,000-t capacity, is fully enclosed to avoid dust pollution and has a significantly lower environmental footprint when compared with the major dredging activities that would be required to construct deepwater berths at the port, according to the company.

Onslow Iron will be one of the largest iron ore developments undertaken in Western Australia, delivering substantial benefits to the state including thousands of construction and operational jobs, billions of dollars of direct local investment through capital expenditure and billions of dollars of state and commonwealth royalties over the life of the project, it added.

Mineral Resources Managing Director, Chris Ellison, said: “Onslow Iron will be transformational, not just for MinRes but for the State of Western Australia. This project will be the cornerstone of our iron ore strategy to deliver low-cost, long-life operations with project economics that are compelling through commodity price cycles.

“We’re looking forward to delivering thousands of jobs for Western Australians and investing billions in the economy.

“Importantly, our innovations will drive lower emissions across the project. Onslow Iron has been designed with a low environmental footprint and will be dust-free from pit-to-port.

“We’re also setting a new FIFO standard with our industry first, resort-style accommodation to ensure the physical and mental safety of our people and to encourage more women, and couples, to live on site.

“It’s in our DNA to aim higher, push the boundaries and forge new paths, which is why Onslow Iron really represents a new paradigm for mining in Western Australia.”

On top of the dust-free innovation and FIFO aims, MinRes has mooted it will run autonomous road trains between the pit and the port at Onslow Iron.