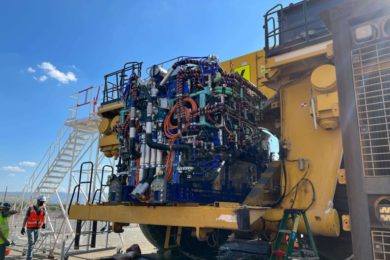 Anglo American’s ambitious plans to roll-out its nuGen™ Zero Emissions Haulage Solution (ZEHS) have been given a boost with the announcement that it has signed a binding agreement with First Mode Holding to combine to the two entities.

Such a deal was mooted back in June when Anglo American confirmed it was in exclusive negotiations with First Mode – and had agreed non-binding terms – to combine the nuGen ZEHS with the specialist engineering technology company.

The two companies’ collaborative efforts led to the launch of the prototype nuGen ZEHS hydrogen-powered mine haul truck at Anglo American’s Mogalakwena PGMs mine in South Africa on May 6, 2022. This month the truck reached a significant milestone when it completed initial commissioning and was introduced into the mine’s commercial fleet operations, including pit and crusher activities, according to First Mode.

The latest agreement will see the mining company invest $200 million into a combined business to help fund the ongoing development of ZEHS which, upon completion of the transaction, values the business in the order of $1.5 billion and results in Anglo American owning a majority shareholding in First Mode.

Upon closing of the transaction, expected in January 2023, Anglo American will enter into a supply agreement with First Mode to decarbonise its global fleet of ultra-class mine haul trucks, of which approximately 400 are currently in operation, in support of Anglo American achieving its 2040 target for carbon-neutral operations.

The roll-out across Anglo American’s haul truck fleet over the next circa-15 years is subject to the completion of agreed and committed studies across seven mine sites, certain performance and cost criteria, and relevant regulatory, corporate and shareholder approvals, the mining company said. The supply agreement also includes the appropriate provision of critical supporting infrastructure such as refuelling, recharging and facilitation of hydrogen production.

Anglo American says it also recognises its role in supporting broader decarbonisation objectives outside its own business and that the technologies and capabilities it develops as part of the nuGen project present opportunities in other industries that rely on heavy duty forms of transport, such as rail.

In addition to accelerating the development and commercialisation of the ZEHS technology, the new combined business will allow strategic third parties to co-invest alongside Anglo American and First Mode, offering the opportunity to accelerate their own decarbonisation and participate in the potential offered by the clean ZEHS technology, the company added.

In a separate press release from First Mode, it mentioned that current First Mode President and CEO, Chris Voorhees, will transition to the role of Chief Product & Technology Officer, overseeing the company’s global product and technology development out of Seattle. Julian Soles, Anglo American’s head of Technology Development, will take over as First Mode CEO and be based in First Mode’s new headquarters in London.

Voorhees said: “First Mode was founded in 2018 with the goal of building the barely possible. We have done just that and our mission is now to rapidly decarbonize heavy industry by dramatically reducing our customers’ greenhouse gas emissions. I can’t imagine a team better suited to this urgent challenge.”

Soles added: “The First Mode mission is much bigger than a single haul truck. Mining is how the world obtains the materials needed for the clean energy transition, and it is where the carbon footprint starts. This is where the First Mode solution begins; starting at the source, in mining, to replace diesel and accelerate the clean energy transition.”