A company out of Arizona, USA, believes it has come up with a density separation technology that could upgrade heavy metal concentrates without the need for water or chemicals.

Lost Dutchman Mine (LDM), named after the legend of a rich Arizona gold deposit discovered by an elusive Dutch prospector, never since located, is the company in question. Being supported along the way by the Centre for Excellence in Mining Innovation (CEMI) out of Sudbury, Ontario, the firm is looking to find a way into the mining sector at a time when environmental, social and governance (ESG) concerns have reached a new high.

Mark Ogram, one of three Co-founders of LDM, explained the company’s aim and name, saying: “We’ve been able to find gold where people could not find it.

“We have now come up with a solution that requires no chemicals or water to purify a gold ore.”

While gold is the company’s initial focus, the process can be applied to most heavy metals including silver, copper and tungsten, according to Ogram. Some encouraging results have also been seen removing sulphides from gold ore ahead of further processing, in addition to ‘cleaning’ coal, he added.

A gravity separation process that uses air flow rather than water to separate these materials by density, the obvious comparisons are with Knelson concentrators or other separation technologies – all of which tend to use water or another medium for their processes. Ogram says Knelson concentrators are also for free gold, not refractory gold, the latter of which the LDM technology can cope with.

allmineral’s allair® technology also comes to mind as a comparison. This is a process that leverages many of the functions of the water-operated alljig® technology but, instead, uses air as the pulsating medium. So far, allair’s applications have been confined to mostly coal and other minerals.

Like many of these technologies, it is feed preparation that will prove decisive for the application of LDM technology, with ore crush size and moisture content the two key factors.

“We don’t think we would need ball mills to get the feed down to the right size,” LDM Co-founder Ken Abbott said. “A standard crushing and screening setup should be suitable.”

While test work to date has been with material in the 30-60 mesh range, Abbott is confident the technology will work with material from 100-200 mesh.

“It will be a little more of a sensitive process, but it does work should people require it,” he said.

When it comes to moisture content, a drying process will most likely be needed ahead of feeding to the LDM unit.

In-field test work involved the company using a tumble-type continuous screener/dryer to reach the appropriate moisture content, but a more ‘industrial’ process will be required in commercial applications.

The best results are likely to be achieved when both factors are consistent, according to LDM.

“The system requires a steady and uniform distribution in the feed cycle that includes surge capacity and automated material flow to ensure a steady feed rate,” the company says.

Dale A Shay, a consultant with RIMCON advising LDM, said vat leaching operations were already producing material at the appropriate size for the LDM technology to be tested. “They are also reducing the moisture content to an appropriate level,” he said.

Despite this, the company feels tailings applications may be the most suitable place to start with. This harks back to the ESG concerns miners are feeling – some of which revolves around tailings impoundment areas – as well as the fact the ‘conservative’ mining industry is generally more comfortable testing new technologies on material they already consider to be ‘waste’.

For the technology to prove out, the company will have to scale up its testing.

LDM has, to date, carried out benchtop, laboratory scale and in-field tests on low-grade material, but it has only reached a 1 ton (0.9 t) per hour rate.

“We would put in a tonne and get a few grams out,” Ogram said. “That is how we developed the technology.”

Despite there being a linear progression of recoveries from benchtop to lab to the field, LDM will need to go bigger to find the widescale applications it is after.

Yet, its potential entry into the market is well timed.

Removing the use of chemicals and water in a process that will most likely come after initial crushing could prove cost-effective, as well as environmentally sound.

Yes, the air flow component and feed drying will consume power on mine sites, but this ‘upfront’ operating cost will pay off further downstream as not as much material will be transported to make its way down the process flowsheet. It is more likely to go straight to tailings or backfill material feed.

Abbott explains: “The technology drastically reduces the material that will move onto final concentration, which substantially reduces material movement on site.”

For new developments, there is a knock-on benefit for permitting; the regulatory boxes are much more likely to be ticked when the words ‘water’ and ‘cyanide’ are absent from applications.

LDM Co-founder, Wayne Rod, sums this up: “Although from a cost perspective, it is expected to be competitive with other concentration technologies, the real savings will come on the ESG front and being able to reduce any environmental issues you may have.”

This is a message Rod and the rest of the LDM team are taking to the headquarters of major mining companies, where executives and board members are treating ESG challenges like a ‘cost’ they need to reduce to stay viable.

“As that ESG issue becomes even more prevalent, I see technology becoming a much bigger focus area,” Rod says. “Taking water and chemicals out of the concentration process will help alleviate some of that pressure.”

W Resources says the first T2 blast at the La Parrilla tungsten mine in Spain shot successfully on April 30.

The blast covered a mainly barren zone to prepare access to the 10 m benches closer to the run of mine pad and crusher plant in the Fast Track Mine area, the company said. This explosion continued to open up directly accessible ore to the mine operation.

Ore mined to-date at the operation, which is envisaged as a scalable project, starting at 2 Mt/y to produce some 2,700 t/y of tungsten concentrate and 500 t/y of tin concentrate, before an expansion to 3.5 Mt/y and beyond, has been free-dig or from the early blast area, W said.

“The immediate priority at La Parrilla is to complete the commissioning of the jig and mill plant, which is underway in parallel with the completion of the large-scale concentrator plant,” the company said.

Michael Masterman, Chairman of W Resources, said: “The first T2 mine blast at La Parrilla is a significant event for W Resources and kicks-off the commencement of hard rock mining operations.

“The explosive blast was completed successfully with the highest level of safety and supervision. The ore will be mined at low cost using a truck and shovel operation and transported via the newly constructed ramp to the new 350 t/h crusher plant where it will be crushed and then fed to the newly constructed jig and mill plant as part of the commissioning process.”

With a throughput of 350 t/h, the two alljig® jigs, provided by allmineral, are expected to provide grading, enrichment and cleaning of the pre-ground ore at La Parrilla.

W Resources is on course to hit its production goal at the La Parrilla tungsten project in the southwest of Spain, with crushing equipment arriving on site.

W’s latest update said capital expenditure was tracking below budget, with engineering and procurement now both over 90% complete.

All major contracts have been placed, with 81.3% of the planned €27.1 million ($31.5 million) spend committed. The company also noted plant civil works were complete, concrete works for the crusher had been laid and works for the jig were underway.

Steel erection for the crusher was advancing quickly, the company said.

W noted that primary allmineral equipment for the jig is arriving on site and allmineral confirmed the jig project was on schedule.

With a throughput of 350 t/h, the two alljig® jigs (one, pictured arriving on site) will provide grading, enrichment and cleaning of the pre-ground ore. 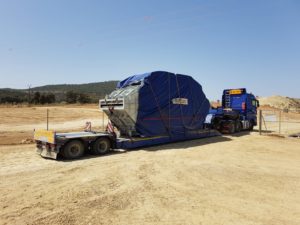 The processing plant, with a capacity of 155 t/h connected to the pre-concentration stage through the alljig jigs, will ensure tailings are separated from the valuable material, thereby achieving a 65% WO3 recovery, the company said.

The fines produced in several processing stages are to be recovered in a separate circuit.