Zest WEG, looking to accommodate the space constraints of a South African platinum mining customer, is constructing a large diesel powered generator set to be delivered later this year.

The capacity of the 2,500 kVA genset will make it the largest unit yet to be fully load-tested at the company’s genset manufacturing facility in Cape Town, South Africa, according to Craig Bouwer, Projects and Product Manager at Zest WEG.

“In addition to functional testing, we will be equipping ourselves to conduct load testing to 11 kV on this unit,” Bouwer says. “With load-banks in-house, we will be stepping the voltage down to 400 V during the testing, and drawing on MV specialists to ensure a safe and reliable process.”

The genset is a highly technical solution to match the customer’s specific needs, he says. Based on the available space, it is housed within a 12 m ISO shipping container with the electrically-driven radiator mounted on the roof.

Prime-rated at 11 kV and powered by an MTU diesel engine, the genset has been designed in close consultation with the customer over a number of months. Having concluded the engineering design, construction is currently underway in Cape Town.

Bouwer highlighted the detailed and time consuming nature of engineering design for a project of this magnitude and complexity: “Stringent technical requirements demanded lengthy and ongoing collaboration not only with the customer, but between our engineering team and production operations,” he said. “The customer was particularly pleased with our flexibility and the extra effort we applied to ensure the optimal technical returnables for the project.”

As one of the few South Africa-based original equipment manufacturers capable of undertaking a customised genset of this capacity in-house, Zest WEG will also be supplying the control and protection panel from its range of electrical equipment and products.

The COVID-19 lockdown has had minimal impact on the work schedule, he noted, as planning and communication with the customer could continue regardless, dealing with various technical clarifications. To facilitate the transportation of this large unit to site, it will be shipped as three separate components: the genset, radiator and exhaust system. Once installation is complete – a process that Zest WEG specialists will supervise – its experts will conduct the cold and hot commissioning, and hand over to the customer.

Three startup technology companies will have the chance to present at the world’s largest mining investment event as part of an agreement between energy and resources open innovation platform Unearthed and organisers of the Investing in African Mining Indaba conference.

The trio of companies will get this pitching opportunity as part of the Startups Unearthed Africa initiative, taking place on day three (February 5, 2020) of the Mining Indaba, in Cape Town, South Africa.

The announcement follows a collaboration between Mining Indaba and Unearthed that gave four emerging technology businesses from Africa the chance to present at the 2019 event.

Unearthed explained: “Startups Unearthed Africa aims to shine the light on partnerships between startups and industry operators or service providers that have delivered value to the resources sector.”

Applications are open to any technology company based, or operating, within Africa that has a case study to share showcasing the successful adoption of an innovative mining technology solution, according to the organisers. The three successful applicants will then get the chance to present to around 750 investors and dealmakers, leaders from over 220 mining companies, and 34 government ministers, Unearthed said.

In addition to awarding three pitching spots, each partnership will receive one full complimentary pass to Mining Indaba, taking place from February 3-6. Finalists will also receive recognition and exposure through Unearthed media channels to the broader mining industry.

Industry Lead – Crowdsourcing at Unearthed, Holly Bridgwater will moderate this session, saying that the organisers wanted the presentations to highlight where resource sector leaders and startups are working together successfully to solve key problems for the mining industry, showing the rest of the industry how this is done.

Investing in African Mining Indaba Senior Conference Producer, Catriona McDavid, said: “Startups are undoubtably a driving force for innovation. Through our Mining 2050 Programme, we are proud to play our part in advancing digital economy opportunities for Africa, and we look forward to welcoming the three successful startups and their partners to present to our global audience, and hope this stimulates greater industry collaboration across the startup community.”

To apply for Startups Unearthed Africa, visit: https://unearthed.link/SUA20 and submit your application before October 14, 2019.

Ivanhoe Mines has released the prefeasibility study for an initial 6 Mt/y copper mine at the Kakula deposit in the Democratic Republic of Congo, in addition to an updated preliminary economic assessment (PEA) combining both Kakula and Kamoa into an 18 Mt/y operation.

The Kakula deposit is in the southerly portion of the Kamoa-Kakula project’s discovery area and would form the first of three deposits to be mined in the 18 Mt/y scenario.

This option came with an initial capital cost of $1.1 billion and would result in an after-tax net present value (8% discount) of $5.4 billion factoring in an average copper price of $3.10/lb.

Ivanhoe said Kakula would benefit from an ultra-high, average feed grade of 6.8% Cu over the first five years of operations, and 5.5% Cu on average over a 25-year mine life.

“Development of twin underground declines has been completed at Kakula, with ongoing underground development activities, including access drives and ventilation raises. In addition, a box cut for a ventilation decline on the southern side of the Kakula orebody is nearing completion,” the company added.

The updated Kamoa-Kakula 2019 PEA presents the alternative development option of a three-phase, sequential operation on Kamoa-Kakula’s copper deposits (pictured below).

Initial production would occur at a rate of 6 Mt/y from the Kakula mine, before increasing to 12 Mt/y with mill feed from the Kansoko mine. A third 6 Mt/y mine would then be developed at Kakula West, bringing the total production rate to 18 Mt/y. 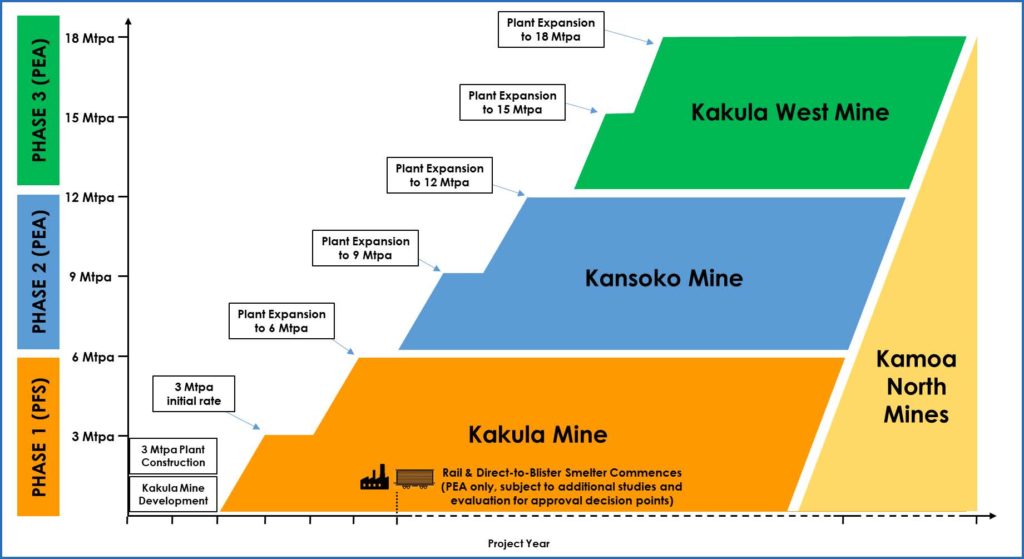 “As resources at Kakula and Kansoko are mined, the PEA envisages that production would begin at several mines in the Kamoa North area to maintain 18 Mt/y throughput over a 37-year mine life,” Ivanhoe said.

For this option, the PEA envisages $1.1 billion in initial capital costs, with future expansion at the Kansoko Mine, Kakula West Mine and subsequent extensions funded by cash flows from the Kakula mine. This resulted in an after-tax NPV (8% discount) of $10 billion using the same long-term copper price of $3.10/Ib.

Under this approach, the PEA also includes the construction of a direct-to-blister flash copper smelter at the Kakula plant site with a capacity of 1 Mt/y of copper concentrate to be funded from internal cash flows. This would be completed in year five of operations, achieving significant savings in treatment charges and transportation costs, according to the company.

The 18 Mt/y scenario would deliver average annual production of 382,000 t of copper at a total cash cost of $0.93/lb copper during the first 10 years of operations and production of 740,000 t/y by year 12. “At this future production rate, Kamoa-Kakula would rank as the world’s second largest copper mine,” Ivanhoe said.

Robert Friedland, Co-Chairman of Ivanhoe Mines, was at the Mining Indaba event in Cape Town, South Africa to announce these results.

He said: “These studies clearly prove our long-standing conviction that Kamoa-Kakula is firmly on track to become one of the absolute greatest copper mining complexes in the world, helping to restore Katanga’s rightful position as the world’s largest copper producing region. This would not have happened without the extraordinary efforts of the Ivanhoe discovery team and our investment of more than $800 million in exploration and development.

“We now look forward to working with the new government of the DRC and the Congolese people to develop Kamoa-Kakula to its full potential, generating widely shared economic benefits that will help to uplift local communities, and provide skills training to help ensure that young Congolese can qualify for the thousands of meaningful direct and indirect jobs that will be created.”

MAXAM will be showcasing the latest blasting technologies on offer to its customers in Africa at Mining Indaba in Cape Town next week as it makes its third consecutive appearance at the event.

MAXAM has a workforce of more than 800 employees and projects in over 20 countries, and has the largest footprint in the Africa continent among the leading blasting solutions providers, it says.

“This position is cemented in its comprehensive range of technologies and local capabilities to support customers,” MAXAM said. “The company is also the leading supplier of packaged explosives and offers both watergel and emulsion bulk products, boosting a versatile portfolio to adapt to specific needs from its different customers.”

Brett Wheatcroft, Regional Director of MAXAM in Southern Africa, said Africa is one of the most important mining areas in the world and the company’s commitment to the continent is clear.

“We have been investing here for more than 40 years and the results couldn’t be better: we are a leading player within our segment of activity and have a growing customer base that more and more values our differential, high-value combination of technologies and technical support.”

MAXAM will take advantage of Mining Indaba to showcase its complete range of solutions for underground operations. Customers attending the event will have the chance to get to know more about one of its novel technologies, RIOFLEX, a highly energetic, robust and flexible density bulk product that, MAXAM says, achieves excellent performance in all types of rock. “This bulk watergel contributes to minimise the total cost of ownership due to the savings in the drilling and blasting application and the whole value chain of the mine as a result of a better fragmentation,” the company said.

RIOFLEX has been tested in more than 140 sites in 25 countries, becoming a benchmark for customers looking to improve the productivity of their mines, quarries and infrastructure projects, according to the company.

Fernando Beitia, Director of Bulk Products of MAXAM, will talk about the company’s emulsion and watergel technologies at a conference during the event.

RCT says it will be promoting the benefits of using autonomous technology to safeguard mine operators and boost productivity when it attends the 25th Mining Indaba in Cape Town, South Africa next month.

RCT CEO Brett White and Business Development Manager Mike Thomas will be at Austrade’s Australia Lounge to engage with conference delegates about the benefits of implementing autonomous technology, the company said.

Thomas said: “There are heightened levels of interest throughout the mining industry on the African continent around the Fourth Industrial Revolution, which is seeing breakthroughs in the areas of sophisticated wireless technologies and fully autonomous equipment.

“RCT has significant experience in the automation field, and we are available to share our many years of learnings and knowledge.

“We are keen to speak to delegates about how our ControlMaster® products can deliver significant gains by relocating equipment operators from cabs to secure operation centres, thus bolstering productivity.”