Rio Tinto Japan has joined Japan’s Green Value Chain Platform Network (GVC Network), a collaboration established by the Ministry of the Environment to lead transparent decarbonisation efforts in the country.

Representative Director and Rio Tinto Japan President, Bill Horie, said: “We are honoured to be welcomed into the Ministry of Environment’s GVC Network and look forward to engaging on innovative approaches with customers, government and industry to help reduce Japan’s carbon footprint.”

Formed in 2018, GVC Network member companies work to set science-based targets for emissions reduction that are economically feasible and effective for the achievement of their Scope 1, 2 and 3 targets; and to share solutions related to renewable energy, energy conservation, or energy storage, Rio said.

Rio Tinto aims to reach net zero emissions across its operations by 2050. Its efforts to support decarbonisation through state-of-the-art solutions such as START Responsible Aluminium – a leading traceability program – aligns with the GVC Network intentions, the company added.

To help reach net zero emissions across its operations by 2050, Rio Tinto is targeting a reduction in emissions intensity by 30% and in its absolute emissions by 15%, both by 2030 and from 2018 levels. The company also plans to spend around $1 billion over five years on emissions reduction projects, research and development and activities to enhance the climate resilience of our business.

Rio Tinto has outlined a series of measurable and impactful Scope 3 emissions reduction goals to guide its approach, which features partnerships across China, Japan and South Korea – countries which account for 88% of the company’s value chain emissions (Scope 3).

The company has also committed that its growth over the next decade will be carbon neutral.

Australian Mines says it has become the first mineral resources company to be certified a “Carbon Neutral Organisation” under the Australian Government’s Climate Active program.

Climate Active is the most rigorous and credible carbon neutral certification available in Australia, according to the company, and meeting the “Climate Active Carbon Neutral Standard” means Australian Mines’ carbon neutral status is based on best practice, international standards and genuine emissions reductions.

Last month, the Queensland Government offered a conditional financial support package to Australian Mines’ 100% owned Sconi cobalt-nickel-scandium project in the north of the state. When fully developed, Sconi is forecast to be one of the most cost competitive cobalt-producing, nickel operations in the world, Australian Mines says.

The 2018 Sconi bankable feasibility study outlined a three open pit, 2 Mt/y operation that could produce some 8,496 t/y of cobalt sulphate, 53,301 t/y of nickel sulphate and 89 t/y of scandium oxide over the 18-year mine life.

“Australian Mines ability to maintain carbon neutral certification will underpin its position as a sustainable business that incorporates leading environmental, social and governance (ESG) practices,” it said. The company is already an approved member of the Initiative for Responsible Mining Assurance (IRMA), which independently verifies and certifies socially and environmentally responsible mining.

“It follows the approval in March 2020 of our membership of IRMA and the Queensland Government recognising our commitment to the communities where we operate by granting ‘Prescribed Project’ status to our flagship Sconi project in 2019,” he said.

Australian Mines’ primary focus is to sustainably develop the Sconi project into a globally significant, ethical, reliable source of technology metals to meet the rapid growth in the electric vehicle and energy storage industries, it says.

“Being certified Carbon Neutral by Climate Active is part of building a sustainable future for Australian Mines, long-term value for our shareholders and a better environment for all our stakeholders,” Bell said. “Members of the Climate Active Network are responsible for over 22 Mt of carbon emissions being offset, which is the equivalent of taking all of Sydney’s cars off the road for two years.”

Australian Mines, which is developing the Sconi cobalt-nickel-scandium project in Queensland, Australia, aims to become certified Carbon Neutral, under the Australian Government’s Climate Active Program, through reducing the company’s greenhouse gas emissions and offsetting its remaining carbon-generating activity, it said.

The move follows the approval of the company’s membership of the Initiative for Responsible Mining Assurance (IRMA) in March 2020. The IRMA is an independent third-party organisation that verifies and certifies socially and environmentally responsible mining, according to Australian Mines, with the company now working towards IRMA certification specifically for the Sconi project.

Australian Mines aims to invest A$1 billion ($604,020) to build a commercial battery metals production plant on the Sconi site. The proposed plant is expected to process 2 Mt/y of ore into battery-grade cobalt sulphate and nickel sulphate, with scandium recovery and production of high purity scandium oxide, it says. Over the life of the proposed Sconi project, 1.4 Mt of nickel sulphate and 200,000 t of cobalt sulphate is due to be produced.

Australian Mines Managing Director, Benjamin Bell, said being 100% carbon neutral was an extension of the company’s commitment to taking a leading position on ESG.

“It will follow on from the approval in March 2020 of our membership of IRMA and Sconi being given ‘Prescribed project’ status in early 2019 by the Queensland Government, which is a recognition of our commitment to the communities where we operate,” he said.

Australian Mines is partnering with Pangolin, which works with the Australian Government’s Climate Active Program, to develop a Carbon Neutrality plan. Australian Mines said it expected to begin implementing its plan by June 30 and be formally certified carbon neutral by the government before the end of the year.

Bell added: “We will join more than 90 organisations across Australia that have attained certified carbon neutrality, leading to over 15 Mt of carbon emissions being offset, or the equivalent of 4 million cars being off the road for a year.”

thyssenkrupp has set some ambitious greenhouse gas emission goals as it looks to fall in line with the 2015 Paris Climate Agreement.

The group aims to cut 30% of its emissions from production and outsourced energy by 2030, and become “climate neutral” by 2050, it said.

thyssenkrupp CEO, Guido Kerkhoff, said: “The threats posed by climate change affect us all. As an industrial company with operations around the globe, we are in a particularly good position to reduce greenhouse gas emissions through sustainable products and processes. We take this responsibility very seriously and have received several awards for this in recent years. Now, we are setting ourselves clear targets for 2030 and 2050 as the next logical step.”

In February, thyssenkrupp was named as a global leader in climate protection for the third year in a row by the non-governmental organisation, CDP, which assesses whether companies have formulated a coherent strategy on how to further improve their own environmental performance as well as that of customers and suppliers. The company, once again, achieved the highest score possible and was placed on CDP’s global ‘A List’, it said.

The targets now announced take in thyssenkrupp’s own production operations, the energy it purchases and its products. In steel production, for example, thyssenkrupp is currently pursuing two approaches to reducing CO2 emissions: The Carbon2Chem project, which is expected to be available on an industrial scale before 2030, and the so-called hydrogen route, which should take full effect by 2050 and make the biggest contribution to directly avoiding CO2. Carbon2Chem converts steel mill emission gases, including the CO2 they contain, into valuable chemicals.

thyssenkrupp’s hydrogen route, meanwhile, involves replacing coal with ‘green’ hydrogen as the reducing agent for blast furnaces so that, in the long term, no CO2 is created in the production of steel. These technologies are being funded by the German federal government and the state of North Rhine-Westphalia. 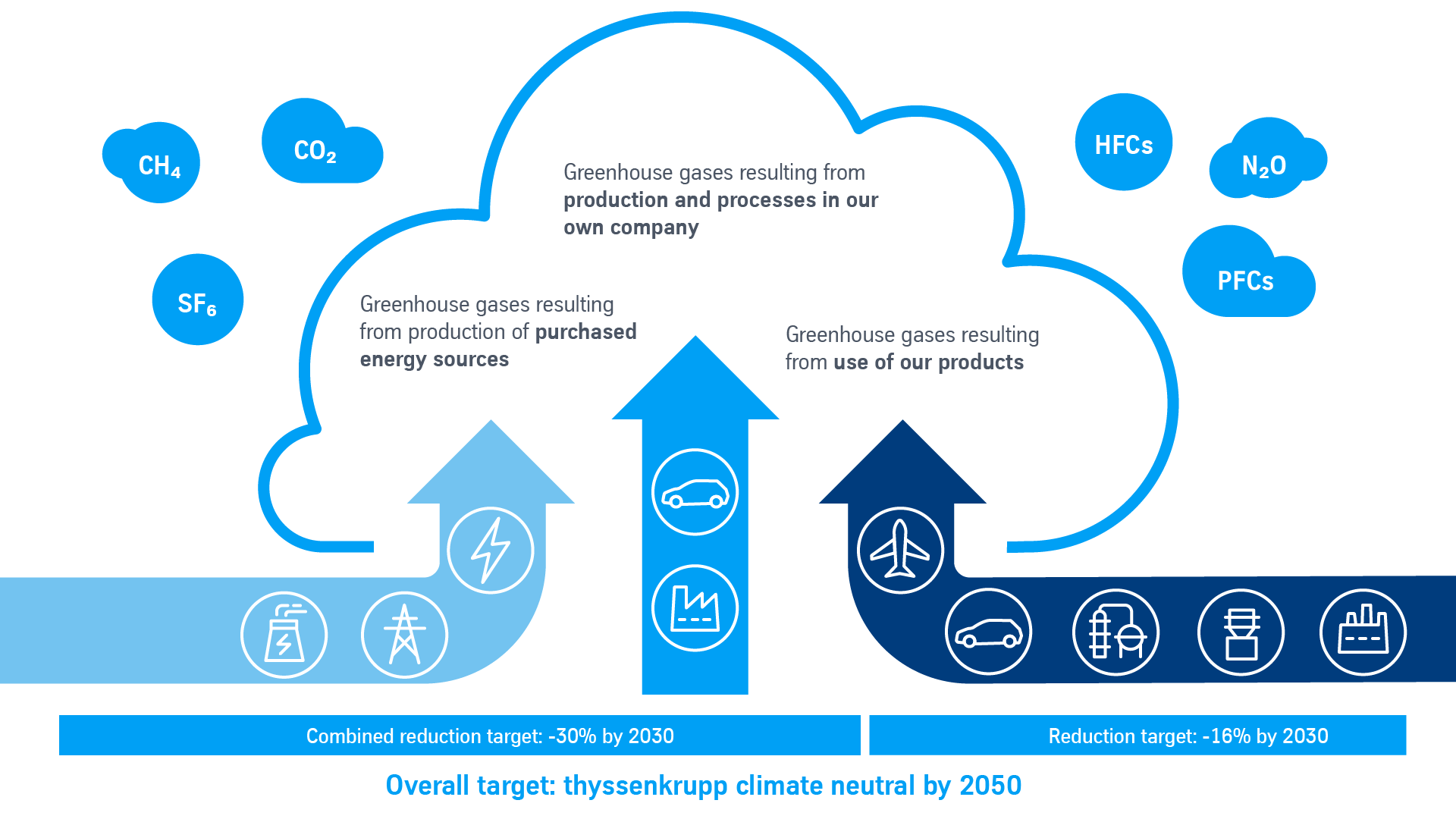 Under its Climate Action Program for Sustainable Solutions, thyssenkrupp will also systematically work to make its products carbon neutral. The group already offers a technology for the cement industry that permits CO2 emissions from the combustion processes to be captured for subsequent storage or processing. In the area of sustainable mobility, thyssenkrupp is working with European partners to produce fuel from biomass. These fuels reduce CO2 emissions by up to 90% compared with conventional fuels, according to thyssenkrupp.

Other key areas include the e-mobility sector, where thyssenkrupp supplies battery production lines and special steels for electric motors. The group is also actively involved in the development of energy storage solutions, for example with electrolysis systems that convert electricity into hydrogen. These storage systems allow a constant supply of electricity from renewables regardless of the weather, thyssenkrupp says.

Dr Donatus Kaufmann, thyssenkrupp Board member responsible for technology, innovation, sustainability, legal and compliance, said: “Our goals are ambitious but achievable. Our strategy for our steel operations alone will cut production-related emissions there by 80% by 2050. But if we are to achieve our climate targets, we need to make significantly more use of renewable energies. Also, there are no internationally harmonised financial incentives for investments in CO2 abatement technologies. These are basic requirements for making a real change.”