The Massmin 2020 crowd got a glimpse of just what will be required to build Colombia’s first underground caving mine during a presentation from AngloGold Ashanti’s Lammie Nienaber this week.

Nienaber, Manager of Geotechnical Engineering for the miner and the presenter of the ‘Building Colombia’s first caving mine’ paper authored by himself, AngloGold Ashanti Australia’s A McCaule and Caveman Consulting’s G Dunstan, went into some detail about how the company would extract the circa-8.7 Moz of gold equivalent from the deposit.

The Nuevo Chaquiro deposit is part of the Minera de Cobre Quebradona (MCQ) project, which is in the southwest of Antioquia, Colombia, around 104 km southwest of Medellin.

A feasibility study on MCQ is expected soon, but the 2019 prefeasibility study outlined a circa-$1 billion sublevel caving (SLC) project able to generate an internal rate of return of 15%. Using the SLC mining method, a production rate of 6.2 Mt/y was estimated, with a forecast life of mine of 23 years.

The MCQ deposit is a large, blind copper-gold-silver porphyry-style deposit with a ground surface elevation of 2,200 metres above sea level (masl, on mountain) and around 400 m of caprock above the economic mineralisation.

The main ore transfer horizon is located 75 m higher in elevation than the mine access portals at 1,080 masl and the proposed valley infrastructure. The initial mining block will be accessed by twin tunnels developed in parallel for 2 km at which point a single access ramp will branch up towards the undercut; the twin tunnels will continue another 3.7 km to the base of the SLC where the crushing and conveying facilities will be located.

The company is currently weighing up whether to use tunnel boring machines or drill and blast to establish these tunnels.

Nienaber confirmed the 20 level SLC panel cave layout would involve 161 km of lateral development and 14 km of vertical development. There would be six ore pass connections on each level, four of these being ‘primary’ and two acting as backups. The crusher would be located on the 1155 bottom production level.

Due to the ventilation requirements in Colombia the mining fleet selected for Quebradona is predominantly electric, Nienaber said, adding that the units will initially be electric cable loaders powered by 1,000 v infrastructure.

Fourteen tonne LHDs were selected for the production levels based on their speed, bucket size (enables side-to-side loading in the crosscut and identification of oversize material) and cable length, the authors said. On the transfer level, 25 t loaders were specified to accommodate the shorter tramming lengths and limited operating areas (there are a maximum of two loaders per side of the crusher due to the layout).

As battery technology improves in the coming years, the selection of loader sizes may change as additional options become available, according to the authors.

The selection of the present Sandvik fleet was predominantly based on the electric loaders and the OEM’s ability to provide other front-line development and production machines required to undertake SLC mining, the authors said. 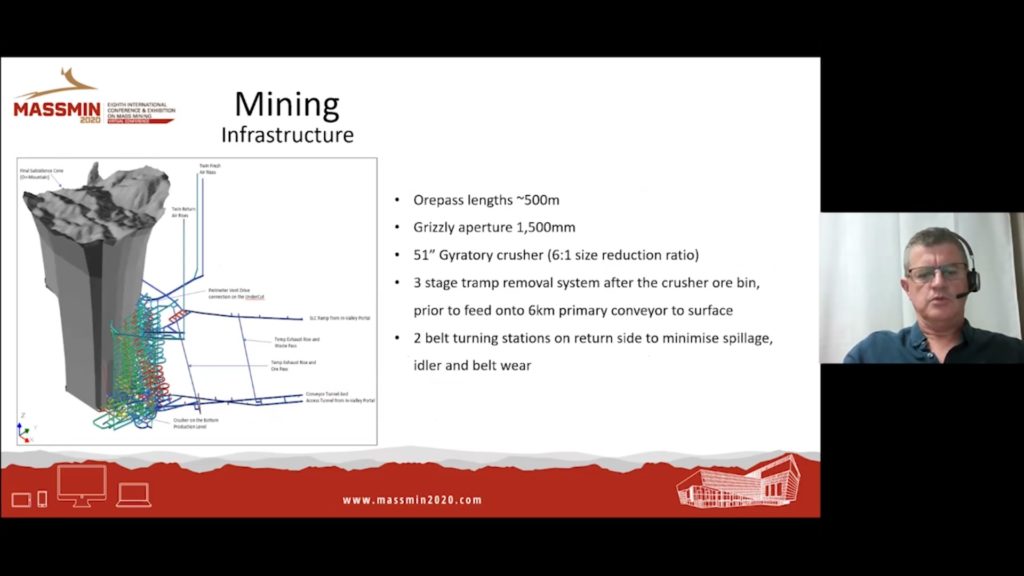 This decision also accounted for the use of automation for the majority of production activities, with the use of a common platform seen as the most pragmatic option at this stage.

It has also been proposed that the maintenance of the machines be carried out by Sandvik under a maintenance and repair style contract since there is a heavy reliance on the OEM’s equipment and systems.

An integrated materials handling system for the SLC was designed from the ore pass grizzlies, located on the production levels, to the process plant.

Due to the length of the ore passes (up to 500 m), and the predicted comminution expected by the time the rock appears on the transfer level, larger than industry standard grizzly apertures of 1,500 mm have been selected.

The design criteria for the underground crusher was that it needed to reduce the ore to a size suitable for placement on the conveyor belt and delivery to the surface coarse ore stockpile, after which secondary crushing prior to delivery at the process plant will be undertaken.

Assuming the maximum size reduction ratio for the crusher of circa-6:1 at a throughput rate of 6.2 Mt/y, a 51 in (1,295 mm) gyratory crusher was selected. This crusher is also suitable to support block cave mining should the conversion of mining method occur, according to the authors.

The process plant will include high pressure grinding rolls as the main crushing unit on the surface, supported by a secondary crusher to deal with oversize material. The ore then feeds to a ball mill before being discharged to the flotation circuit.

The gold-enriched copper concentrate will be piped to the filter plant for drying and the removal of water down to a moisture content of 10%, according to the company, while the tailings will be segregated to pyrite and non-pyrite streams before being distributed to one of two filter presses.

Dry stacking of the tailings will be used, with the pyrite-bearing tailings being encapsulated within the larger inert tailings footprint.

With the feasibility study due before the end of the year – and, pending a successful outcome – the proposed site execution works could start in the September quarter of 2021, Nienaber said.

Better understanding of fragmentation can account for downstream cost efficiencies, with implications for many aspects of an operation, according to Group Product Manager Mine Measurement, Jason Richards.

“Sub-optimal fragmentation is immediately associated with inefficient excavation and haulage,” Richards said. “Undue damage to crusher parts is another impact. Excessive energy usage, crusher downtime due to wear and tear outside of planned maintenance and delivering out-of-specification product are directly linked to operational performance.”

Individual rocks can be modelled from scanning of muck piles and draw points to provide accurate fragmentation S-curves from blasting or caving operations.

The new tool allows blast engineers and surveyors to quickly assess the condition of blasted rock, ideally before the material heads to the crushing process, while oversize rocks can be isolated for more effective haulage and processing, the company says.

“A simple scan-analyse-report workflow provides a table where rocks outside of spec can be identified and dealt with before the material gets anywhere near the plant,” Richards said. “A unique feature allows editing rocks or fines in the 3D view and characterising any that are not correctly defined.”

Visual and tabular reporting is immediately understandable so rock can be fed with optimal dimensions for crushing, according to the company.

Fragmentation analysis on 3D data is considerably more powerful and intuitive than methods that rely on analysing imagery. For operations with Maptek BlastLogic, the digital output can be used to compare actual with predictive fragmentation for continuous improvement of drill and blast processes.

While Fragmentation Analysis is a paid add-on in PointStudio 2020, many other new and enhanced features will be delivered to existing customers for free in the update, Maptek says.

“We’ve made it possible for fully registered scans to be imported from the scanner controller tablet into PointStudio,” Richards said. “Subsequent scans can then be registered with a single click as they are acquired.”

Surveyors can immediately start interrogation, analysis and modelling in PointStudio. An additional benefit derives from field access to aligned scans, allowing timely checks for survey coverage before moving to the next position.

Mine operations commit significant effort to the capture and measurement of as-built data for working faces and stockpiles, Maptek says.

“They can’t afford to let data inaccuracy and inefficient processing prevent them from getting full value from their survey data,” Richards added. “Bad data can lead to poor productivity and risks bad decisions based on incomplete information.”

An updated feasibility study on the development of the underground mine at Oyu Tolgoi, in Mongolia, has confirmed that the huge copper-gold project will be delivering sustainable production later than initially planned and this output will come with a higher capital expenditure bill.

Majority owned by Rio Tinto through its 66% stake in Turquoise Hill Resources, Oyu Tolgoi is currently being mined as an open-pit operation (producing 146,346 t of copper and 241,840 oz of gold in 2019), yet previous studies have indicated a combined open-pit and underground operation could up the tally to around 500,000 t/y of copper.

Back in July 2019, Rio Tinto included an update on the underground project saying first output was expected to be achieved between May 2022 and June 2023, a delay of 16 to 30 months compared with the original feasibility study guidance in 2016, while preliminary estimates for development capital spend was $6.5-$7.2 billion, $1.2-$1.9 billion up on the $5.3 billion previously disclosed.

The updated feasibility study issued this week from Oyu Tolgoi LLC (owned 66% by Turquoise Hill and 34% by the Mongolian government), which is in the process of being submitting to the Government of Mongolia in accordance with Mongolian regulations and standards that require mining companies to submit updated feasibility studies every five years, includes a delay of 21 to 29 months for first sustainable production compared to the original feasibility study guidance in 2016 and an increase of $1.3-$1.8 billion from the original $5.3 billion development capital.

It also includes a new mine design for Panel 0 of the Hugo Dummett North underground mine at Oyu Tolgoi, as well as confirming that the caving method of mining remains valid.

Detailed study, design, engineering and optimisation work is ongoing to support the definitive estimate of Panel 0 for the development of this orebody, which remains due in the second half of 2020, Rio said.

These estimates are subject to any additional scheduling delays or increases in capital costs arising from the impacts of the ongoing COVID-19 pandemic, it added.

Back in July 2019, Rio said enhanced geotechnical and geological information obtained from drilling and mapping at depth suggested there may be some stability risks associated with the original mine design. This updated design was the result of a review of this information.

As a consequence of leaving the pillars in place, the material contained in the pillars has been reclassified from reserves to resources, Rio said, adding that part of the material contained in these pillars could be recoverable at a later stage following additional studies currently underway. This saw 2.43 Mt of copper, 570,000 oz of gold and 4.81 Moz of silver added to the July 3, 2020, Hugo Dummett North resource base.

Ore handling infrastructure will be relocated to the pillars, located immediately north and south of the current Panel 0 boundaries, Rio explained, with Panels 1 and 2 now be initiated as independent panels or mine blocks.

Optimisation of mine designs for Panels 1 and 2 is ongoing and it is anticipated that this next phase of study may result in further movements in classifications of reserves and resources, according to Rio.

Arnaud Soirat, Chief Executive of Copper & Diamonds, said: “This amended mine design is another positive step in the development of the underground mine which will unlock the most valuable part of Oyu Tolgoi. We remain focused on delivering the underground project safely and within the guidance ranges we have announced on both cost and schedule.”